Iran deadlines swept aside as negotiators settle on moment of truth

"We have our own sense of deadline," US Secretary of State John Kerry said outside the Palais Coburg on Wednesday afternoon. 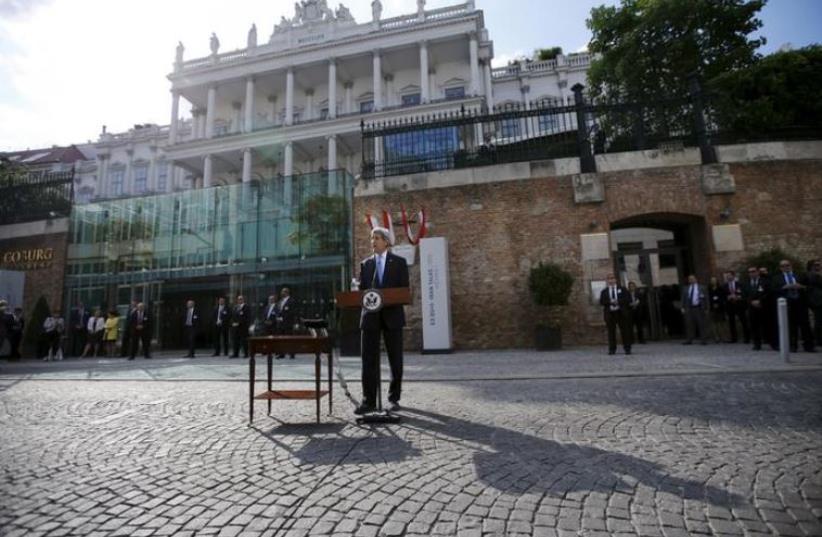 Kerry speaking in Vienna, July 1, 2015
(photo credit: REUTERS)
Advertisement
VIENNA -- Negotiators here in the Austrian capital are brushing aside the practice of setting hard deadlines in their pursuit of a comprehensive nuclear agreement with Iran. Two years into one of the most difficult international negotiations in decades, they have now resolved to stay in Vienna until the deal is done— or until it becomes evident one cannot be reached.The United States delegation believes that moment of truth will come at some point in the next several days. Entering that moment, they remain "hopeful," one delegate said on Wednesday, all the while willing to walk away."We have our own sense of deadline," US Secretary of State John Kerry said outside the Palais Coburg on Wednesday afternoon. He was delivering remarks on Washington's decision to open an embassy in Cuba, but could not help commenting on the prospect of a far more consequential rapprochement."I would say as we look at the world today, with conflicts that we see and even these negotiations taking place here in Vienna, it is important for people to understand that things can change, that leadership can be effective and can make a difference," Kerry said."We have some very difficult issues,​" he added,​ "​but we believe we are making progress and we are going to continue to work because of that​.​"​​Entering his morning meeting with Kerry, Iranian Foreign Minister Mohammad Javad Zarif ​denied that the decision by negotiators to extend their interim agreement— the Joint Plan of Action— ​from June 30 ​until July 7 amounted to a ​new ​deadline."We did not set any deadline," Zarif said. "We will continue, and we will make progress."​Zarif said that he had invited the head of Iran's nuclear watchdog, the International Atomic Energy Agency, to Iran ​for consultations on Thursday.​IAEA Director-General Yukiya Amano​ will meet with Iranian President Hassan Rouhani and his aides, the agency said. Their meetings are expected to focus on the IAEA's process in requesting access to non-nuclear sites — such as military installations — in order to verify the correctness and completeness of Iran's nuclear declarations.​
​
​Iran's leadership has publicly ruled out granting​ IAEA access to its military sites. But the IAEA says such access is necessary for it to complete its work towards verifying compliance to any future deal.The US, France and Britain say such access is an absolute requirement of a deal.Meetings among the foreign ministers of Germany, Britain, China the US and Iran are expected to continue throughout the day on Thursday.Upon reaching a final text, Iranian media is reporting that Zarif will likely travel back to Tehran in order to get final approval from the country's supreme leader.The US, Britain, France, Russia, China and Germany seek to curb Iran's nuclear work for a ​finite period. Iran seeks ​swift sanctions relief and to retain much of its nuclear infrastructure. ​Israel opposes the deal in its current form.​