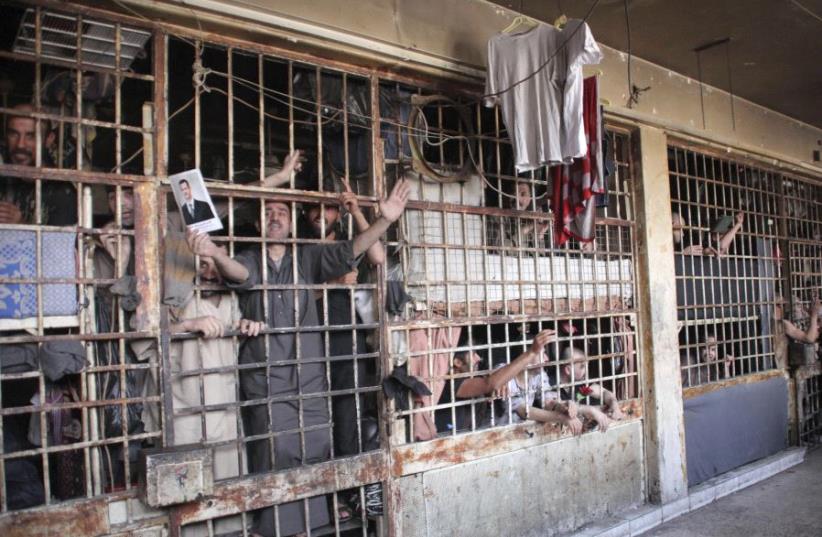 A Syrian prison
(photo credit: REUTERS)
Advertisement
DUBAI &mdash; Iran has detained an Australian-based academic on charges of trying to &quot;infiltrate&quot; Iranian institutions, according to official media.Meimanat Hosseini-Chavoshi was detained as she was leaving Iran, the state news agency IRNA said.Hosseini-Chavoshi, a population expert, is affiliated with the Melbourne School of Population and Global Health, according to the University of Melbourne's website.Population control has become a sensitive issue in Iran since Supreme Leader Ayatollah Ali Khamenei issued an edict in 2014 calling for a population increase after decades of state-promoted birth control.In October, Khamenei called for increased efforts to combat enemy &quot;infiltration&quot; as tensions escalated with the United States after Washington withdrew from a landmark nuclear deal and reimposed sanctions on Iran.Asked about reports that several experts advocating population curbs had been arrested, judiciary spokesman Gholamhossein Mohseni Ejei told reporters on Sunday:&quot;One person has been arrested in this regard ... and three or four people are being sought,&quot; the judiciary's news website Mizan reported. Ejei gave no further details.IRNA said last week there were reports that authorities had detained an Australian-based population expert on charges that she had tried to &quot;infiltrate&quot; state bodies in Iran.IRNA quoted an attorney as naming the detained woman as Hosseini-Chavoshi, saying that she did not yet have a lawyer.The agency quoted the hardline daily Kayhan as saying Hosseini-Chavoshi, reported to hold dual Australian and Iranian nationality, was detained by security forces in a drive against &quot;enemy infiltration elements&quot; as she was leaving Iran.Reuters reported in 2017 that Iran's Revolutionary Guards had arrested at least 30 dual nationals in recent years, mostly on espionage charges. Among those held is British-Iranian aid worker Nazanin Zaghari-Ratcliffe, a project manager with the Thomson Reuters Foundation.Iran does not recognize dual nationality and does not routinely announce arrests or charges of dual nationals, whose rights to consular assistance are enshrined in the U.N. Vienna Convention.