According to 'The Guardian', the airline is 'facing a mutiny' from staff members who object to being forced to wear garb that constitutes 'ostentatious religious sign.' 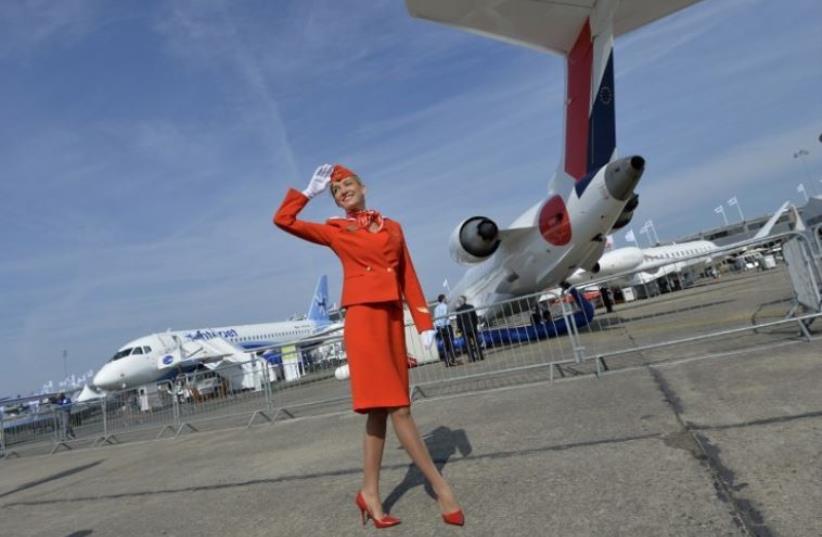 A flight attendant salutes to visitors during the International Paris Airshow at Le Bourget
(photo credit: AFP PHOTO)
Advertisement
Air France is compelling female members of its cabin crew to wear more modest attire and a headscarf on renewed flights to the Iranian capital of Tehran – a move that is causing consternation among its workforce. According to The Guardian, the airline is “facing a mutiny” from staff members who object to being forced to wear garb that constitutes “ostentatious religious sign.”The airline’s union has raised the matter with management, which is standing firm on the required dress code just weeks before Air France resumes three daily flights to the Iranian capital.The union, however, has countered that the requirement is an infringement on individual rights and also contradicts France’s avowedly secular character.Air France has implemented a similar dress code on the airline’s flights to Saudi Arabia. According to The Guardian, female crew members must cover their entire body with an abaya.The row between Air France management and crew comes against the backdrop of renewed economic ties between the European Union and Iran following the completion of the nuclear agreement signed by the governments in Tehran and major world powers.Air France flights from Paris to Tehran were discontinued eight years ago after sanctions were imposed against the Islamic Republic.“They are forcing us to wear an ostentatious religious symbol,” Francoise Redolfi, a union leader, told RFI radio. “We have to let the girls choose what they want to wear. Those that don’t want to must be able to say they don’t want to work on those flights.”“Many female members of flight crews have told us that it’s out of the question they be obliged to wear headscarves. It’s not professional and they see it as an insult to their dignity.”