Nuclear talks with Iran will end next week with the outcome still unclear, a diplomat in the negotiations said on Wednesday.

“We will continue until we reach an agreement or announce the collapse of negotiations next week,” French chief negotiator Philippe Errera told Iran International News.

Some of the diplomats in the talks have taken to saying this is their “endgame” in social media posts.

Errera tweeted a photo of the first page of the draft agreement, with the negotiations’ motto “Nothing is agreed until everything is agreed” emblazoned at the top of the page.

“Never has it been more true than today,” he wrote, adding the hashtag “#endgame.”

The head of the British delegation to the negotiations, Stephani Al-Qaq tweeted, “A few difficult issues remain. Work continues to resolve them. #EndgameViennaTalks”

Russian Ambassador to International Organizations in Vienna Mikhail Ulyanov tweeted a photo of JCPOA participants and the US meeting “to compare notes and discuss the way ahead at the final stage of the Vienna talks.”

Russian Ambassador to International Organizations in Vienna Mikhail Ulyanov tweeted a photo of JCPOA participants and the US meeting "to compare notes and discuss the way ahead at the final stage of the Vienna talks." 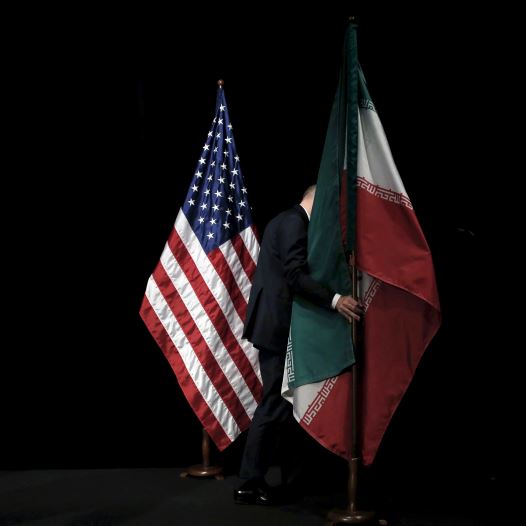 A staff member removes the Iranian flag from the stage during the Iran nuclear talks in Vienna, Austria July 14, 2015 (credit: REUTERS)

The Iranian delegation was not in the room, as they continue to refuse to negotiate directly with the US in the talks to revive the 2015 Joint Comprehensive Plan of Action nuclear deal. That agreement restricted Iran’s uranium enrichment, while gradually lifting sanctions on the regime.

The US departed the JCPOA in 2018, citing Iran hiding elements of its nuclear program and its continued malign actions and proxy warfare throughout the Middle East, and placed heavy sanctions on Iran. In the ensuing years, Iran upped its uranium enrichment to 60% – weapons-grade is 90% – among other violations of the JCPOA.

Iran’s top nuclear negotiator, Ali Bagheri Kani, headed back to Tehran on Wednesday for final consultations, while much of the rest of the delegation remains in Vienna.

Kani is expected to update Iran’s Supreme National Security Council about the talks on Saturday.

Iranian Foreign Minister Hossein Amirabdollahian said nuclear talks have reached a “sensitive point,” during a news conference with his Omani counterpart in Tehran.

“In Munich, we emphasized to the European Union’s Borrell that Iran will never cross its red lines,” Hossein Amirabdollahian added. “We wonder whether the Western side can adopt a realistic approach to go through the remaining points of the talks.”

Reuters reported last week that a US-Iranian deal was taking shape in Vienna after months of talks between Tehran and major powers to revive the nuclear deal pact, abandoned in 2018 by then-US president Donald Trump, who also reimposed extensive sanctions on Iran.

A draft text of the agreement alluded only vaguely to other issues, diplomats said, adding that what was meant by that was unfreezing billions of dollars of Iranian funds in South Korean banks, and the release of Western prisoners held in Iran.

Iran has demanded the lifting of all sanctions invoked since the US left the JCPOA in 2018, including those for terrorism and human rights violations.

In addition, Iran has sought a guarantee from the US that future presidents will not leave the deal, which the Biden administrations cannot legally give.

Israel has said Iran seeks to stop open International Atomic Energy Agency probes, and the removal of the Islamic Revolutionary Guard Corps’ designation as a terrorist organization, as well as to keep its advanced centrifuges, rather than destroy them.

US House Majority Leader Rep. Steny Hoyer (D-Maryland) said he “would be surprised if any agreement... would remove IRGC from the terrorist list in our country, until such a time as the IRGC stops supporting terrorist activity in the region, in particular, Hezbollah, Hamas and the Houthis.”

A senior diplomatic source in Jerusalem was not sanguine about the chances of Vienna talks ending well for Israel.

“It’s not a good situation,” the source said. “We tried every way to convince [the US to seek a tougher deal].”

Israel is left “hoping for a force majeure [freeing the parties from compliance in the case of extraordinary circumstances], but I don’t even think a war in Ukraine will stop this if there is political will on both sides... Russia and the US are still sitting in the same room,” the source added.

Now, Israel is thinking about what it will do on the day after an agreement is signed, the source said.

Defense Minister Benny Gantz said on Tuesday that those actions must include ensuring IAEA monitoring and safeguards and stopping Iran from developing ballistic missiles capable of carrying nuclear warheads, as well as seriously sanctioning Iran in the event of a future violation of the agreement.

Israeli Ambassador to the UN Gilad Erdan spoke out against Iran at a Security Council meeting on Wednesday.

Iran “funds an army of six terrorist proxies dedicated to establishing a Shiite hegemony throughout the region,” Erdan said. “With Hamas and Islamic Jihad in Gaza, Hezbollah in Lebanon and Syria, and the Houthis in Yemen, the Iranian regime is hell-bent on leaving a wake of destruction in every place that it touches.

“If this is how Iran acts now, it is frightening to imagine what the region will look like when Iran becomes a nuclear threshold state,” he stated.

Erdan said a return to the JCPOA “will create a far more volatile and violent Middle East.”

“As a result of the quickly approaching sunset clauses included in the JCPOA, a renewed Iran deal will permit the ayatollahs to develop and operate the most advanced centrifuges, while shrinking the breakout time of a nuclear Iran to almost zero,” the ambassador said. “While the world – including this council – continues to turn a blind eye to Iran’s destructive and dangerous aspirations, the State of Israel will not hesitate to act as is required.”