A Clinton victory would be a reassuring signal to Europe. 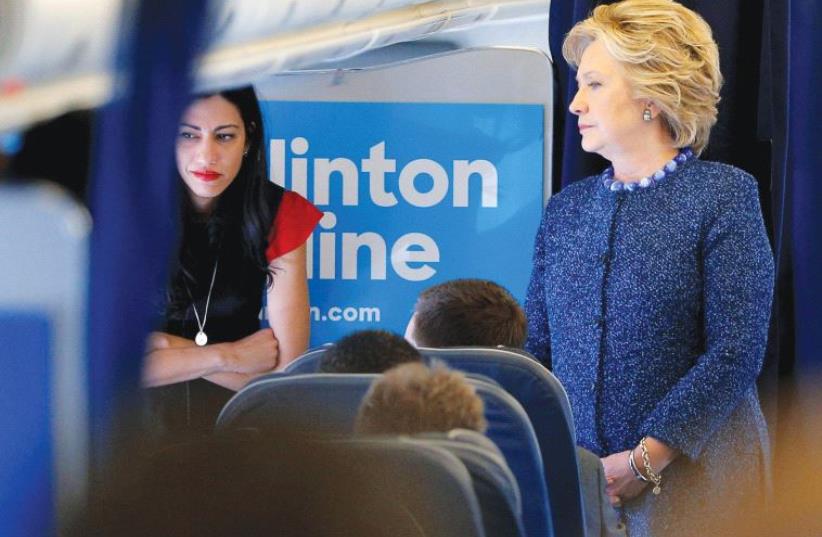 Hillary Clinton talks to staff members, including aide Huma Abedin (left), on her campaign plane before takeoff from White Plains, New York
(photo credit: REUTERS)
Advertisement
BERLIN - After a year of disappointment, European businesses are hoping a victory for Hillary Clinton in the US election next week may help break the logjam that has prevented large-scale Western investments in Iran since the opening of its economy.While no one in Europe is predicting a flurry of new deals should Clinton defeat her Republican rival Donald Trump on Nov. 8, a win for the Democrat would remove some of the political clouds hanging over last year's nuclear deal between Iran and world powers.Business groups say this could help fuel a more aggressive push into the Iranian market in 2017, especially in the second half of the year, if a Clinton victory is followed by the re-election of moderate Iranian President Hassan Rouhani next May."If Clinton and Rouhani win, then we will have a political window of opportunity that is much bigger than we have now," said Matthieu Etourneau, who advises French firms on the Iranian market for MEDEF International, the French employers group."This is what the European banks and companies are waiting for," he said.Back in January, when the United States and Europe lifted sanctions related to Iran's nuclear program, the excitement in Europe's business community was palpable.With a population of 78 million and annual output higher than that of Thailand, Iran was the biggest economy to rejoin the global trading and financial system since the 1991 break-up of the Soviet Union.European politicians flocked to Tehran with dozens of corporate executives in tow. Rouhani, a pragmatist elected in 2013 on a platform to reduce Iran's isolation, traveled to Paris and Rome to promote his country to eager investors.But within months the euphoria had vanished, replaced by frustration on both sides.BIGGEST OBSTACLEThe biggest obstacle for European firms seeking to do business in Iran has been the reluctance of the continent's largest banks to finance deals out of fear they could run afoul of US sanctions and incur massive penalties down the line.The United States has taken steps to reassure the banks. Last month the Treasury Department's Office of Foreign Assets Control (OFAC) issued new guidance to allay concerns about doing US dollar transactions with Iran.But Secretary of State John Kerry acknowledged at a think-tank event in London this week that banks remained skittish. German officials raised their concerns about the hurdles during a recent visit by US sanctions coordinator Daniel Fried.This caution is likely to persist, regardless of who is sitting in the White House. Beyond the issue of sanctions, the poor state of Iranian banks after a decade outside the international financial system, the strong state role in the economy and a lack of clarity about the legal system are all deterrents to foreigners."Everyone knows now that this will be a long, step-by-step process to build up our economic ties," said Friedolin Strack, head of international markets at the Federation of German Industries (BDI).Still, a Clinton victory would be a reassuring signal to Europe. Her close adviser Jake Sullivan was a key figure in the secret negotiations in Oman that paved the way for the landmark agreement that curbed Iran's disputed nuclear activity, and she has defended it during the election campaign.Trump, by contrast, has called it "one of the worst deals ever made" and promised to renegotiate it if he is elected. Bankers say the risk of the deal unraveling under a Trump presidency has contributed to the reticence in Europe.Recently however, there have been signs of movement.Smaller German banks, pressed by their clients to support them in Iran, are beginning to offer limited financing and payment services."Medium-sized banks that finance the German Mittelstand have a great deal of interest in Iran business and are preparing the groundwork intensively," said Siegfried Utzig, acting head of economic policy and international affairs at the Association of German Banks (BvB). "We can see the light at the end of the tunnel but it's still quite far away."ENORMOUS POTENTIALIn June, the German government began offering export credit guarantees via insurance group Euler Hermes for firms wanting to trade with Iran.Edna Schoene, head of German government business at Euler Hermes, said about 30 formal applications had been received since then with a total value of about 2.5 billion euros. Nine of them have been approved.Add to that roughly 70 non-binding letters of interest (LOIs) that have been issued and the volumes push up into the double-digit billions of euros, Schoene said."The potential in Iran is enormous and the demand for export credit guarantees is high, both in terms of formal applications and expressions of interest," Schoene said. "I expect that we will see the first large-scale, credit-financed deals in 2017."Some European firms are already benefiting from the opening of the Iranian economy. Last week French carmaker PSA Group , once the market leader, announced it had produced 105,000 cars in Iran under the Peugeot license in the third quarter, 15 percent of its total sales volume.Etourneau of MEDEF International is also optimistic that Iran's order of 118 jets from Europe's Airbus and a recent joint venture deal between carmaker Renault and Iranian investment fund IDRO will prove a boon for smaller European suppliers.MEDEF International announced last month it was opening an office in Tehran, its first outside France, to support small and medium sized French firms seeking to enter the Iranian market."We expect that 20-30 billion euros in public contracts to be attributed by the Iranians before the end of their fiscal year in March," Etourneau said. "What we are telling companies is that they need a 5-10 year strategy. The market will open up progressively."