Germany's domestic intelligence agency said in its annual report that Iranian efforts to illegally procure technology, especially in the nuclear area, had continued at a "high level" in 2015. 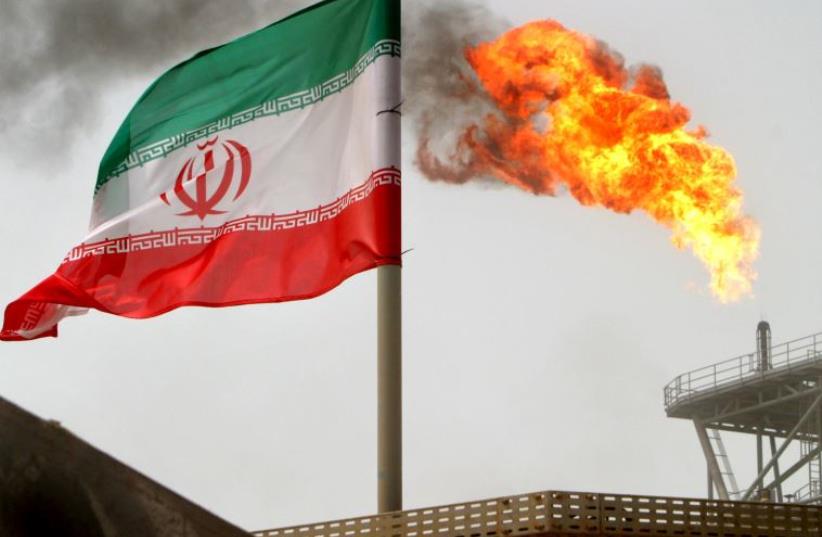 A gas flare on an oil production platform in the Soroush oil fields is seen alongside an Iranian flag in the Gulf
(photo credit: RAHEB HOMAVANDI/REUTERS)
Advertisement
DUBAI - Iran will press on with its missile program "with full force" based on national security needs, a foreign ministry spokesman was quoted as saying on Saturday, adding that critical comments by Germany's leader were unhelpful.Chancellor Angela Merkel told the parliament in Berlin on Thursday that missile launches by Iran earlier this year were inconsistent with a U.N. resolution urging it to refrain for up to eight years from missile work designed to deliver nuclear weapons.Foreign Ministry spokesman Bahram Qasemi said Merkel's remarks were "not constructive" and would have no bearing on the programme, according to state news agency IRNA.Reiterating Tehran's assertion that the missiles are not designed to carry nuclear weapons, he added: "Iran will continue with full force its missile program based on its defensive plans and national security calculations."On Friday, Iran rejected as "unrealistic" a report by U.N. Secretary General Ban Ki-moon criticizing its missile launches as inconsistent with its deal with world powers to curb sensitive nuclear activity in exchange for sanctions relief.Reuters reported on Thursday that a confidential report by Ban had found the tests to be inconsistent "with the constructive spirit" of the July 2015 agreement.Responding to German intelligence reports that Iran has been trying to acquire nuclear technology in Germany, Berlin said on Friday that certain forces in Iran may be trying to undermine the nuclear deal.Germany's domestic intelligence agency said in its annual report that Iranian efforts to illegally procure technology, especially in the nuclear area, had continued at a "high level" in 2015.