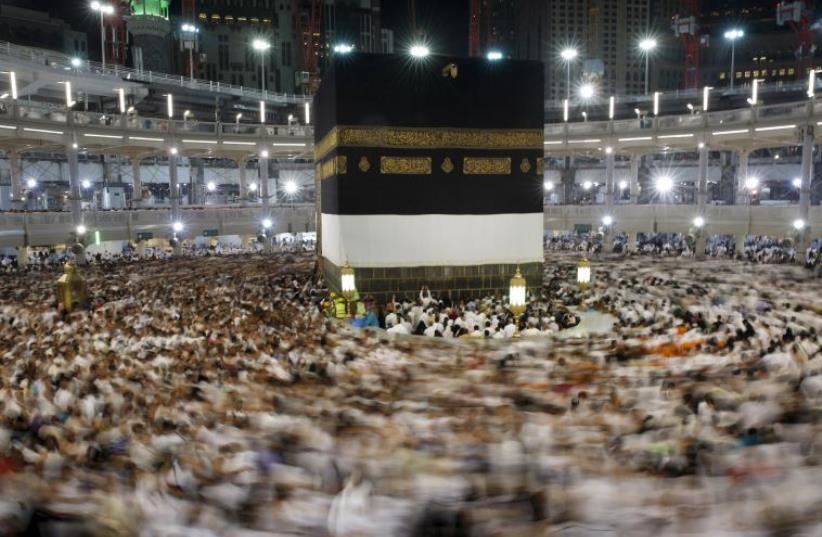 Muslim pilgrims pray around the holy Kaaba at the Grand Mosque ahead of the annual haj pilgrimage in Mecca
(photo credit: REUTERS)
Advertisement
DUBAI - Iran's Haj and Pilgrimage Organization said on Sunday the country's pilgrims would not attend the annual Muslim haj pilgrimage, blaming regional rival Saudi Arabia for "sabotage" and failing to guarantee the safety of pilgrims.Relations between the two countries plummeted after hundreds of Iranians died in a crush during last year's haj and after Riyadh broke diplomatic ties when its Tehran embassy was stormed in January over the Saudi execution of a Shi'ite cleric.The dispute has provided another arena for discord between the conservative Sunni Muslim monarchy of Saudi Arabia and the revolutionary Shi'ite republic of Iran, which back opposing sides in Syria and other conflicts across the region."Due to ongoing sabotage by the Saudi government, it is hereby announced that ... Iran's pilgrims have been denied the privilege to attend the haj this year, and responsibility for this rests with the government of Saudi Arabia," the Haj and Pilgrimage Organization said in a statement carried by Iran state media.Saudi media earlier said an Iranian delegation had left the kingdom without an agreement over the haj, the second time the two countries have failed to reach a deal.Saudi Arabia has blamed Iran for the impasse."The issue of ensuring the safety of the pilgrims was very important for us, considering the past actions of the Saudi government last year and the martyrdom of many pilgrims from Iran and other countries," Iranian Culture Minister Ali Jannati told Iran state television.Iran boycotted the haj for three years after 402 pilgrims, mostly Iranians, died in clashes with Saudi security forces at an anti-US. and anti-Israel rally in Mecca in 1987.Eight months after the last haj, Saudi Arabia has still not published a report into the disaster, at which it said more than 700 pilgrims were killed, the highest death toll at the annual pilgrimage since a crush in 1990.