'Iran ready to give US slap in the face'

A commander of the Iranian Revolutionary Guards cautioned the US against underestimating Iran's capabilities, saying that the US better be careful or it shall receive "a slap in the face." 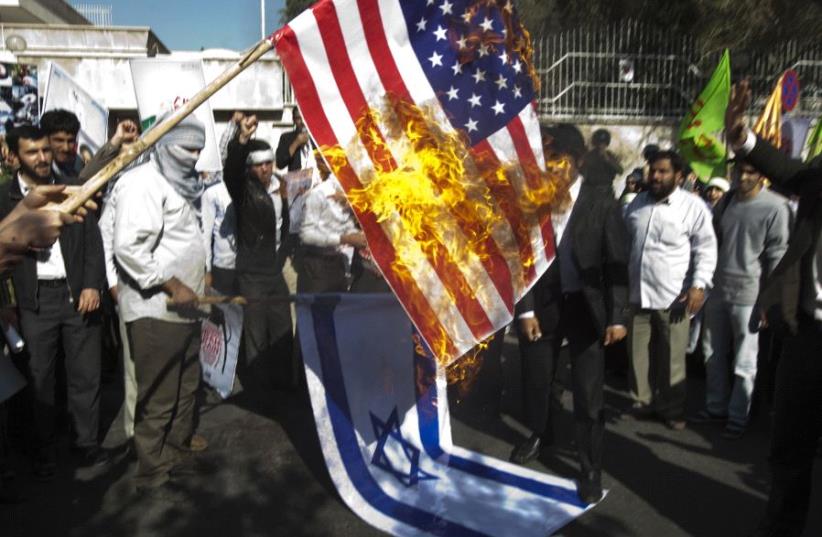 Iranian students burn a US flag.
(photo credit: REUTERS)
Advertisement
The United States should expect a "strong slap in the face" if it underestimates Iran's defensive capabilities, a commander of the elite Revolutionary Guards said on Wednesday, as Tehran concluded war games.Since taking office last month, US President Donald Trump has pledged to get tough with Iran, warning the Islamic Republic after its ballistic missile test on Jan. 29 that it was playing with fire and all US options were on the table."The enemy should not be mistaken in its assessments, and it will receive a strong slap in the face if it does make such a mistake," said General Mohammad Pakpour, head of the Guards’ ground forces, quoted by the Guards' website Sepahnews.On Wednesday, the Revolutionary Guards concluded three days of exercises with rockets, artillery, tanks and helicopters, weeks after Trump warned that he had put Tehran "on notice" over the missile launch."The message of these exercises ... for world arrogance is not to do anything stupid," said Pakpour, quoted by the semi-official news agency Tasnim."Everyone could see today what power we have on the ground."The Guards said they test-fired "advanced rockets" and used drones in the three-day exercises which were held in central and eastern Iran.As tensions also mounted with Israel, a military analyst at Tasnim said that Iran-allied Hezbollah could use Iranian made Fateh 110 missiles to attack the Israeli nuclear reactor at Dimona from inside Lebanon.
Khamenei says Iran does not fear Trump
Hezbollah leader Sayyed Hassan Nasrallah said last Thursday that his group, which played a major role in ending Israel's occupation of Lebanon, could strike Dimona."Since Lebanon's Hezbollah is one of the chief holders of the Fateh 110, this missile is one of main alternatives for targeting the Dimona installations," Hossein Dalirian said in a commentary carried by Tasnim.Iran says its missile program is defensive and not linked to its 2015 nuclear deal with world powers. During the US election race, Trump branded the accord "the worst deal ever negotiated," telling voters he would either rip it up or seek a better agreement.