Iran's deal to import Russia's S-300 was put on hold amid international sanctions in 2010, prompting the Islamic Republic to develop its own missile defense system. 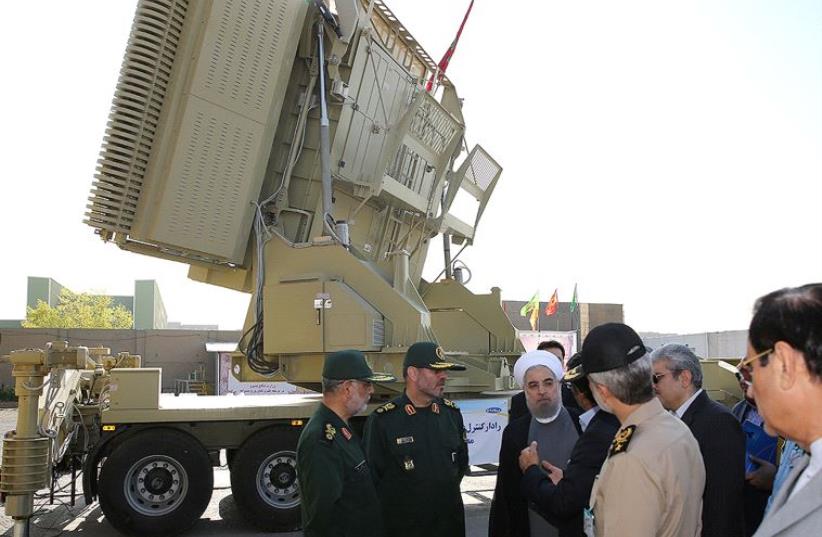 Iran's President Hassan Rouhani (3rd L) and Iranian Defence Minister Hossein Dehghan (2nd L) stand in front of the new air defense missile system Bavar-373, in Tehran, Iran August 21, 2016
(photo credit: REUTERS)
Advertisement
Tehran on Sunday unveiled its domestically built answer to the Russian S-300 advanced air defense system in a ceremony attended by President Hassan Rouhani.Iranian news agencies ran photos of Rouhani at a Defense Ministry exhibition that included the showcasing of the Bavar-373 air defense system, which would presumably make any effort to bomb Iran’s nuclear facilities more difficult.The deal to import Russia’s S-300 was put on hold amid international sanctions in 2010, prompting the Islamic Republic to develop its own missile defense system.Since last year’s signing of the nuclear deal that saw Western nations provide Tehran with sanctions relief in exchange for promising to place limits on its nuclear program, parts of the S-300 have reportedly been delivered. It is not, however, believed to be operational in the country.Israel and the US have protested Russia’s sale of the S-300 to Iran.The Bavar-373 was successfully test fired in August 2014 and is designed to hit targets at high altitudes, according to Iran’s Press TV.Rouhani, accompanied by Defense Minister Brig.-Gen. Hossein Dehqan, was also briefed on the progress of manufacturing for Iran’s first turbojet engine, as well as other air defense projects.The Iranian president praised the Defense Ministry for helping to disprove “unfair and baseless” allegations that Iran seeks to build weapons of mass destruction, and added that this was an integral part of reaching the nuclear deal with the P5+1 group of world powers in July 2015.