Pictures showing the Iranian MP in a village near Damascus alongside Revolutionary Guards' fighters, carrying a rifle, were disseminated on Iranian news sites in the last week. 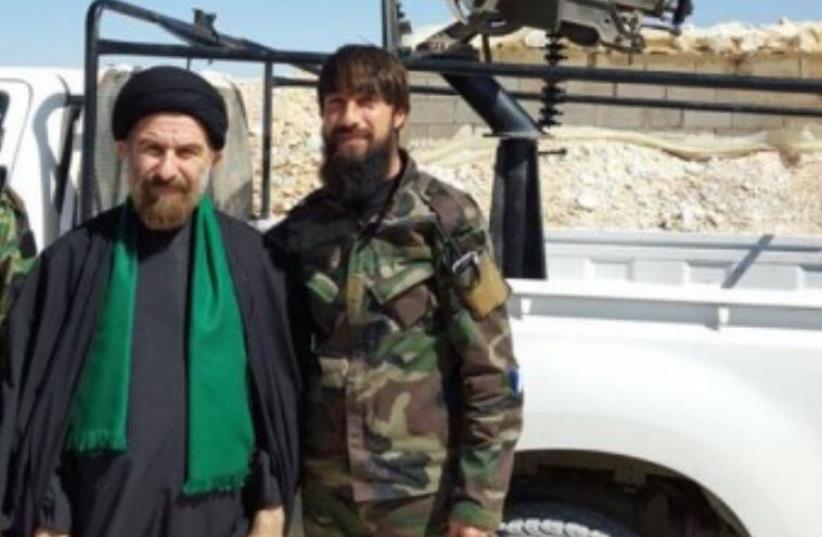 Ali Ghafari (left) next to Iranian fighter
(photo credit: ARAB SOCIAL MEDIA)
Advertisement
Ali Mohammad Ghafari, a member of the Iranian Parliament, has recently joined the ranks of Iran's Revolutionary Guards forces fighting in Syria alongside the Syrian Arab Army.Pictures showing Ghafari in a village near Damascus alongside Revolutionary Guards' fighters, carrying a rifle, were disseminated on Iranian news sites in the last week. One of the images, taken on March 11-12, shows Ghafari next to a former commander in the Revolutionary Guards who is a crony of the elite Quds Force commander, General Qassem Suleimani.In a message he sent through social media before leaving for Syria, the Iranian MP said: "I am heading to Syria to sacrifice myself for Sayyidah Zeinab (the daughter of Imam Ali, and a major Shi'ite symbol)."Ghafari's remarks manifest to a great extent the sectarian dimension of the Syrian civil war. Iran has sent forces to fight alongside the Syrian army not only to buttress the regime of Syrian President Bashar Assad, but mainly in order to protect the Shi'ite shrines in the state. The multiple terror attacks carried out by ISIS in February near the Sayyida Zeinab shrine in Damascus, killing more than hundred people, prove that Iran's fear is well-founded.Sixty-year-old Ghafari formerly filled important roles in the Iranian Revolutionary Guards. Currently, he is a member of the parliamentary committees for agriculture and natural resources.