The vote, Iran's first since last year's nuclear deal with world powers, could determine whether the Islamic Republic continues to emerge from isolation after years of sanctions. 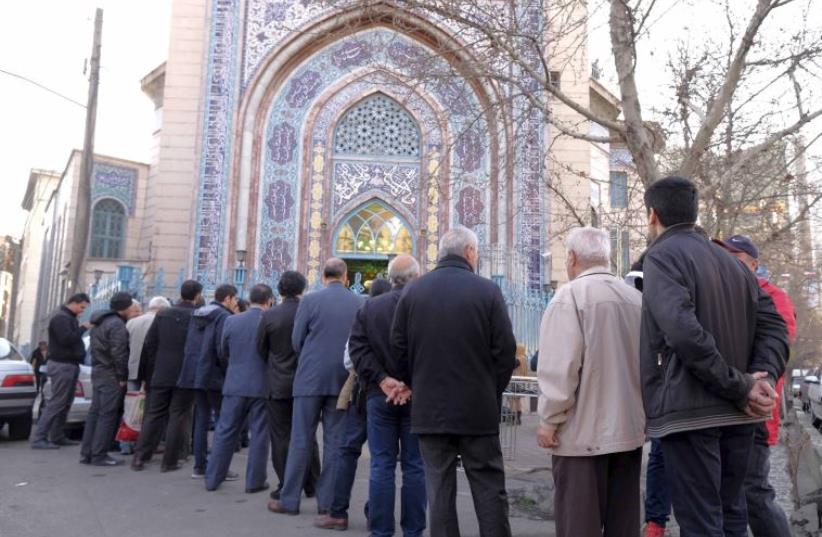 Iranians stand in line to cast their votes during elections for the parliament and Assembly of Experts
(photo credit: REUTERS)
Advertisement
TEHRAN - Iranians voted in two crucial elections on Friday, with Supreme Leader Ayatollah Ali Khamenei calling for a big turnout that would frustrate Tehran's adversaries, a remark reflecting the Islamic Republic's traditionally anti-Western policies."I suggest our nation to cast their votes early ... they should choose their candidates wisely ... a big turnout will disappoint Iran's enemies," Khamenei, smiling and waving to voters, said after casting his ballot in Tehran.The vote, Iran's first since last year's nuclear deal with world powers, could determine whether the Islamic Republic continues to emerge from diplomatic and economic isolation after years of sanctions.The contest is for parliament and the Assembly of Experts, a body that has the power to appoint and dismiss the supreme leader, Iran's most powerful figure. Both are currently in the hands of hardliners.Supporters of pragmatist President Hassan Rouhani, who championed the nuclear deal and is likely to seek a second presidential term next year, are pitted against conservatives deeply opposed to detente with Western powers.Both sides have called for a strong turnout. Most reformist candidates have been barred by a hardline clerical vetting body, along with many moderates, but their supporters have called on voters to back Rouhani's allies and keep the conservatives out.Results are hard to predict, with conservatives traditionally doing well in rural areas and young urbanites favoring more reformist candidates.At stake is control of the 290-seat parliament and the 88-member Assembly of Experts. During its eight-year term it could name the successor to Ayatollah Ali Khamenei, who is 76 and has been in power since 1989.If the Assembly of Experts is called upon to choose a successor to Khamenei, its decision could set the Islamic Republic's course for years or even decades to come.Mistrust of the West runs deep, and hardliners have sought to undermine Rouhani's allies by accusing them of links to Western powers.SETTING COURSEA more supportive parliament would allow Rouhani to continue his economic reforms at home and diplomatic engagement abroad, and perhaps begin to chip away at social restrictions that irk a large segment of Iran's young, educated population.Whatever the outcome, though, Iran's political system places significant power in the hands of the conservative establishment including the Guardian Council, the Islamic judiciary, and the Supreme Leader.The 12-member Guardian Council must approve all new laws and vet all electoral candidates, on both technical and ideological grounds. It has already played a role in Friday's vote by excluding thousands of candidates, including many moderates and almost all reformists.Nevertheless, prominent reformists and moderates have scrabbled together a joint list of candidates in Tehran - 30 for parliament, and 16 for the Assembly of Experts - and hope this can propel them to an overall majority in both bodies."Our speculation is that the extremists or principlists won't have the majority in the parliament and the general atmosphere of the majlis (parliament) will be changed," Mohammad Reza Aref, a reformist former vice president standing for parliament, told Reuters.