In 2016, a ballistic missile test was conducted by Iran's Revolutionary Guards in which anti-Israel slogans were written in Hebrew on the missiles. 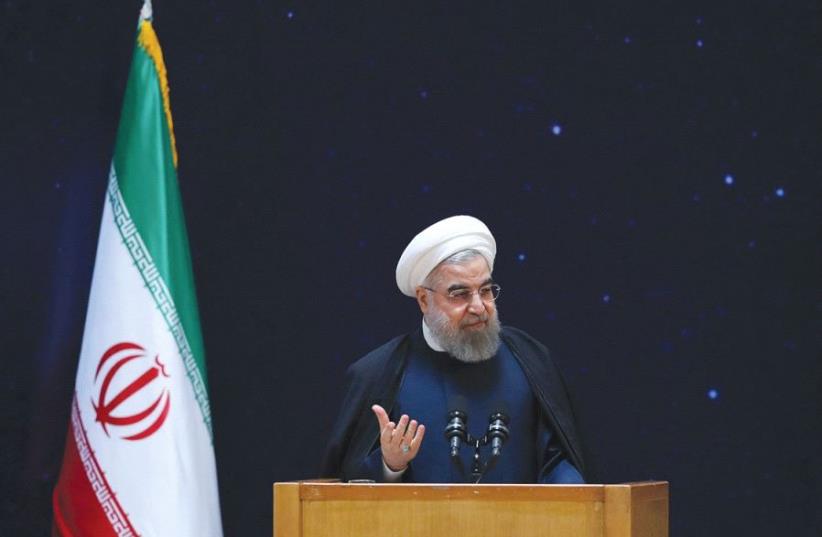 IRANIAN PRESIDENT Hassan Rouhani speaks in Tehran.
(photo credit: REUTERS)
Advertisement
ANKARA - In a presidential debate in Tehran carried live on state TV, Iran's current president Hassan Rouhani battled criticism that few Iranians had enjoyed any tangible benefits from the 2015 deal under which Iran curbed its disputed nuclear activity in exchange for relief from global sanctions."What has changed since the deal? What has changed in the day to day lives of our people?" said hardline candidate Ebrahim Raisi, one of four sharia (Islamic law) judges who oversaw executions of thousands of political prisoners in the 1980s.However, all of Rouhani's opponents in the debate said they accepted the nuclear pact as "it was a national accord."During the debate, Rouhani accused unnamed hardliners of trying to derail the nuclear deal, referring to a ballistic missile launch in 2016 by the Iranian Revolutionary Guards in which "Israel must be wiped out" was written on the missiles in Hebrew, according to Iranian media.Rouhani was elected by a landslide in 2013 on pledges to end Iran's international isolation that had crippled the economy and to ease restraints on society in the Islamic Republic. He seeks re-election on May 19 against hardline rivals, though even supporters voice disappointment at his performance in office.Another conservative candidate, Tehran Mayor Mohammad Baqer Qalibaf, also a former commander in Iran's elite Revolutionary Guards, accused Rouhani of failing to tackle unemployment estimated at 12-20 percent.In response, Rouhani said Iran's reconnection with the global financial system after most sanctions were lifted had already borne fruit in renewed oil exports and was sure to yield jobs and investment boosting the economy in coming years."All the nuclear-related sanctions have been lifted. Today, we export 2 million barrels oil per day. Without the deal it would be reduced to 200,000 bpd," said Rouhani.Iran’s overall economic outlook has improved since the nuclear accord. The International Monetary Fund (IMF) predicts between 4 and 5.5 percent growth in 2016, well up from the 1.3 percent it forecast before the deal was clinched.International rights groups and activists in Iran say Rouhani has done little to bring about greater social freedoms. Dozens of activists, journalists, bloggers and artists have been jailed by a hardline judiciary beyond Rouhani's control.But Vice President Eshagh Jahangiri, who is also running for election but will campaign alongside Rouhani, warned of a return to outright authoritarianism in Iran and isolation abroad if a hardline candidate was elected in May."Dear people of Iran, what do you want? Do you want limitations or more freedom? Do you want international tension or peace? Isolation or integrity? By casting your vote you will determine Iran's path," Jahangiri said.Despite his vulnerability on the economy, analysts say Rouhani retains a strong chance of re-election as he is the only candidate supported by a pro-reform camp while hardliners have failed to unite behind one candidate.