Jerusalem had tried to block sale of the advanced Russian-made missile defense system to Tehran. 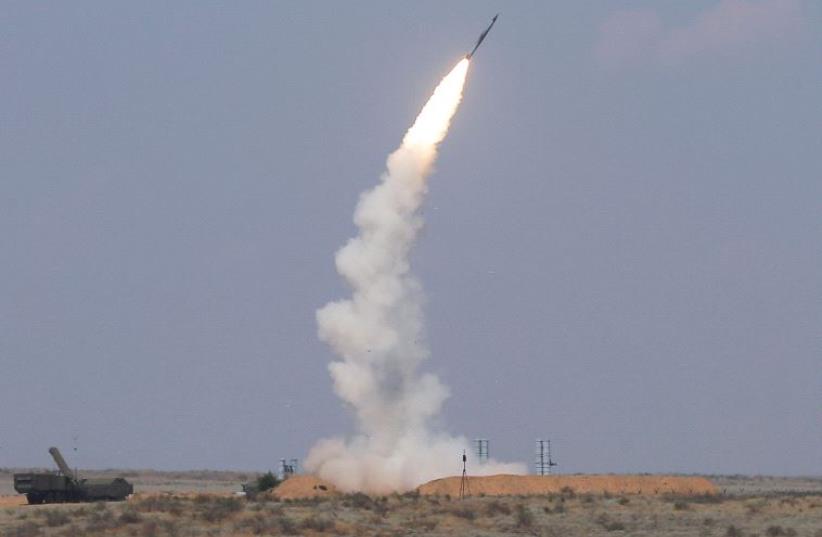 The S-300 air defence system launches a missile during the International Army Games 2016 at the Ashuluk military polygon outside Astrakhan, Russia, August 7, 2016
(photo credit: REUTERS)
Advertisement
A day after Iran test its S-300 advanced missile defense system, Israel is cautiously monitoring the situation.After years of delay, the advanced Russian-made S-300 missile-defense system successfully completed a series of tests and has become operational, Iranians state media reported on Saturday.Abraham Assael, CEO of the Fisher Institute for Air and Space Strategic Studies in Herzliya and a former brigadier- general, said Israel cannot afford to ignore the S-300.“The S-300 advanced missile defense system is a system that wasn’t there before and which is very dangerous,” he told The Jerusalem Post on Sunday.While the S-300 is an older system with radar unable to detect stealth technology such as that possessed by F-35 fighters, “it’s very good against third or fourth generation combat aircraft,” which make up the vast majority of Israel’s air force.The missile-defense system was delivered by Russia last year in a $800 million deal that had been halted in 2010 due to United Nations Security Council sanctions that barred the sales of advanced weapons to Tehran. The restrictions were lifted last year after the Islamic Republic and six world powers signed the nuclear deal in July 2015. In October 2016, Moscow announced it had completed the delivery of the systems to Iran.Israel had long sought to block the sale, as it believes Iran will violate the international accord aimed at preventing it from developing nuclear weapons. Jerusalem is also concerned that the S-300 might hurt Israel’s air superiority in the region.The Israel Air Force’s first two F-35s arrived in the country on December 12. Israel is set to receive two full squadrons of F-35s by 2022; with extremely low radar signatures, they can operate undetected deep inside enemy territory and evade advanced missile defense systems like S-300s. According to senior Israeli officials, the aircraft will ensure Israel complete air superiority in the region for the next 40 years.The drill, called “Damavand,” saw the Iranians test the Russian-made system against a variety of aerial targets, including a ballistic missile which, according to Brig.-Gen. Farzad Esmaili, the commander of the Khatam al-Anbiya Air Defense Base, was “smashed” by the S-300. The Iranian military also tested the system’s electronic warfare measure that lock onto targets in difficult conditions, the Tasnim News Agency reported.“The S-300 is a system that is deadly for our enemies and which makes our skies more secure,” Esmaili is quoted as saying.Iranian state television aired footage of the missiles launching, saying that the drill took place in the county’s central desert, without giving a precise location.The Islamic Republic is also developing its own version of the S-300 system, the IRIB broadcaster reported, quoting Esmaili as saying that the Bavar-373 system, which “would be [more] technologically advanced than the S-300,” is due to be tested “in the near future.”Assael said that Tehran developing its own advanced missile defense system comes as no surprise.“The Iranians are well-advanced in their technology. In the last decade or two we can say that they developed a lot, especially in the field of rockets,” he said, adding that while it takes time to develop a complicated system, the Iranians are very capable of developing a very advanced system, even more so than the S-300.Iran’s Supreme Leader Ayatollah Ali Khamenei has dismissed calls from US President Donald Trump’s administration to stop testing ballistic missiles, and in February, Mojtaba Zonour, a member of Iran’s National Security and Foreign Policy Commission and a former Islamic Revolution Guards Corps official, warned that an Iranian missile could hit Tel Aviv in under seven minutes.