Jeremy Ben-Ami, group’s president: Fight over accord is "long-term policy and political battle." 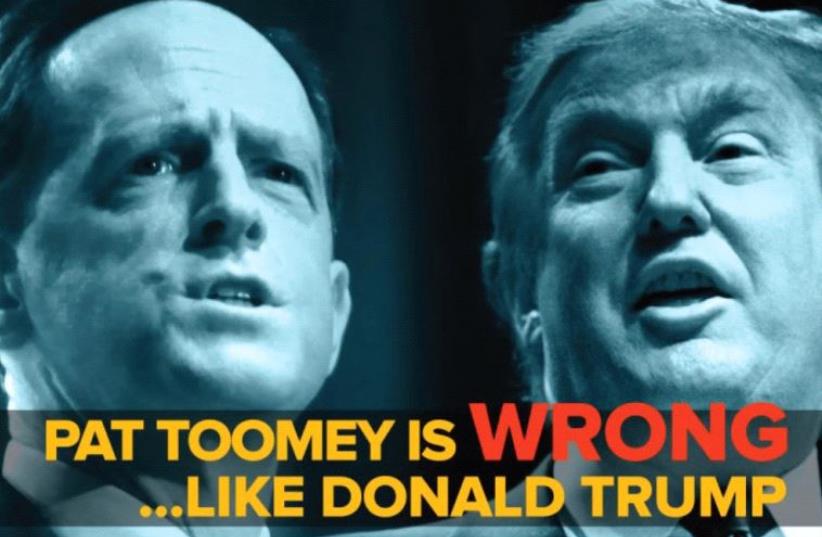 A SCREENSHOT from a J Street ad featuring Pennsylvania Sen. Pat Toomey’s position on the Iran deal.
(photo credit: COURTESY J STREET)
Advertisement
NEW YORK – The organization J Street launched a $500,000 advertising campaign this week to help ensure that House and Senate candidates who have backed the Iran nuclear deal in Congress and on the campaign trail get elected or reelected in the upcoming elections.The ads, which will first launch in two swing states – Wisconsin and Pennsylvania – are part of a J Street effort to “prove that diplomacy-first policies also make for good politics” by focusing on Senate races in which candidates have been attacked for their support of the Iran deal.“The fight over the Iran deal is a long-term policy and political battle here in the United States between those who believe in diplomacy as a method of achieving security and those who pursue other means as their first choice,” J Street president Jeremy Ben-Ami said during a briefing for journalists on Wednesday.“Last year, we saw Chapter 1 of this fight, which was the policy fight over the deal that took place in the US Congress and that turned out to be a strong victory for diplomacy,” he continued. “This year, we are seeing what we are referring to as Chapter 2 of the fight over the Iran deal and that is the fight in the context of the 2016 elections.”Ben Ami, who views the Iran deal as “not simply good policy, but good politics”, explained that the campaign, which includes television and Internet advertising as well as direct mail and polling, is not just aimed at engaging in defense but also in offense “against some of those who have been strong opponents of diplomacy.”The 30-second television ad directly attacks Sen. Pat Toomey in Pennsylvania and Sen. Ron Johnson in Wisconsin, both vocal opponents of the Iran nuclear deal, showing them side by side with Donald Trump and explaining they are wrong in their position on the issue.“It is one of the long-time truths of American politics, that strength is shown through muscular use of military force and those who seek to exploit strength on the campaign trail essentially oppose diplomacy as a sign of weakness,” Ben Ami said. “We are turning that around.”Retired US ambassador Thomas R. Pickering, who served in multiple countries including Israel, Jordan, Russia and India and served as under secretary of state for political affairs from 1997 to 2000, said he supports J Street’s efforts with the new campaign.“Those who are trying to turn support for the Iran deal into political liability are very much following narrow political interests as opposed to what I believe are the true national interests here,” he told journalists.“As a career diplomat I can attest to the fact that this deal is an example of the highly effective use of the tools of diplomacy to advance our national security interest.”Pickering added that “candidates or groups who continue to say the agreement is not a good agreement, should in my view stop playing politics with the issue, so that a central question of our national security is dealt with outside of political debate and in the realm of our vital national security interest.”J Street drew some harsh criticism for supporting the nuclear agreement with Iran since it was signed and for speaking out against Prime Minister Benjamin Netanyahu when he gave his speech to Congress in March 2015.The organization has even been recently called “un-Jewish” by a top Israeli diplomat.Last year, J street ran a $5.5 million campaign in support of the nuclear agreement, which included targeted television, print, digital ads and lectures in key media markets around the country.Beyond Pennsylvania and Wisconsin, the group has created ads for Illinois and New Hampshire as well, which they hope to run in local media markets soon.