Fans of the team, which represents the al-Ahwaz region that was occupied by Iran in 1925, donned traditional Arab keffiyeh head coverings to express their solidarity with the Arab nation. 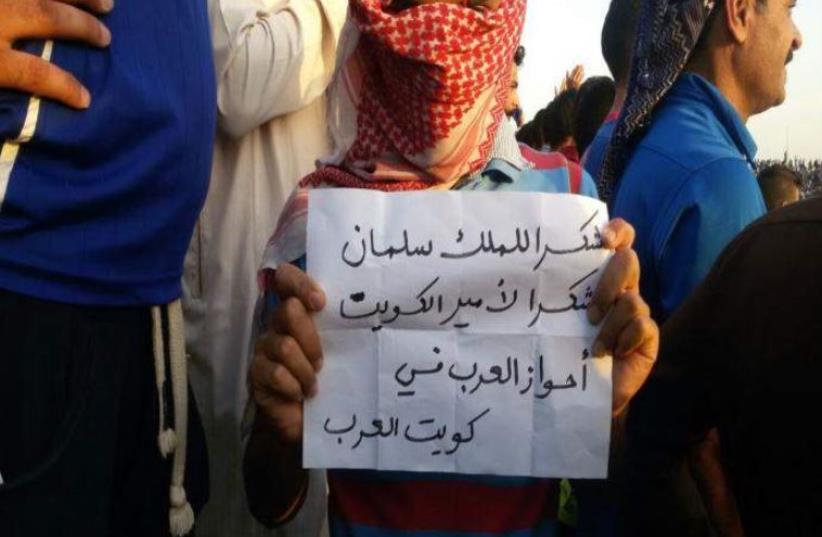 The banners raised by "Ahwaz Independence" fans
(photo credit: ARAB MEDIA)
Advertisement
"Ahwaz Independence," a soccer team representing the al-Ahwaz region’s secession movement, which seeks independence from the Iranian occupation, has won the Iranian soccer championship.In the match, which took place in the team’s stadium on Friday, the pro-secessionist team beat its rival from the city of Isfahan after scoring two goals.The al-Ahwaz region is the name of what was once an autonomous emirate within Iran called Arabistan. In 1925, after disputes with Arabistan's emperor, Reza Khan, the then-ruler of Iran invaded the oil-rich emirate and occupied it. The area is mostly inhabited by Arab Ahwazis, who are not affiliated with the Islamic Republic, which is why Iran, striving to change the demographic balance in al-Ahwaz, encourages Persian citizens to move there. The 50,000 fans of "Ahwaz Independence" who attended the match celebrated their team's momentous victory by donning traditional Arab keffiyeh head coverings and raising banners in solidarity with the Saudi king, thereby expressing their loyalty to the Arab world. They also raised the white flag of Arab Ahwaz. "Thank you King Salman, thank you Emir of Kuwait, the Arab Ahwaz in the country of Kuwait," a banner raised by a group of fans wearing keffiyehs read. Last week, Kuwait hosted a conference of the movement of the Arab struggle for the liberation al-Ahwaz.The thousands of fans also chanted: "Al-Ahwaz is Arab, bring us an Arab cup." Following the victory, dozens of fans took to the streets of the al-Ahwaz' capital and started firing shots in the air to express their happiness.Heading to the stage to raise the championship cup, Ahwaz players refused to obey the Iranian authorities who asked them to raise a yellow banner with anti-Arab slogans.Mohammad al-Ahwazi, a member of the media office of the movement of the Arab struggle for the liberation al-Ahwaz, told the Saudi newspaper al-Watan: "The residents of al-Ahwaz try to use all the opportunities they have to express their opposition to the occupation."He added that "soccer is one of the important means we have to make people hear us. The sport stadiums in al-Ahwaz have become part of our national struggle, where we can gather and emphasize our rejection of the occupation and our loyalty to the Arab nation."