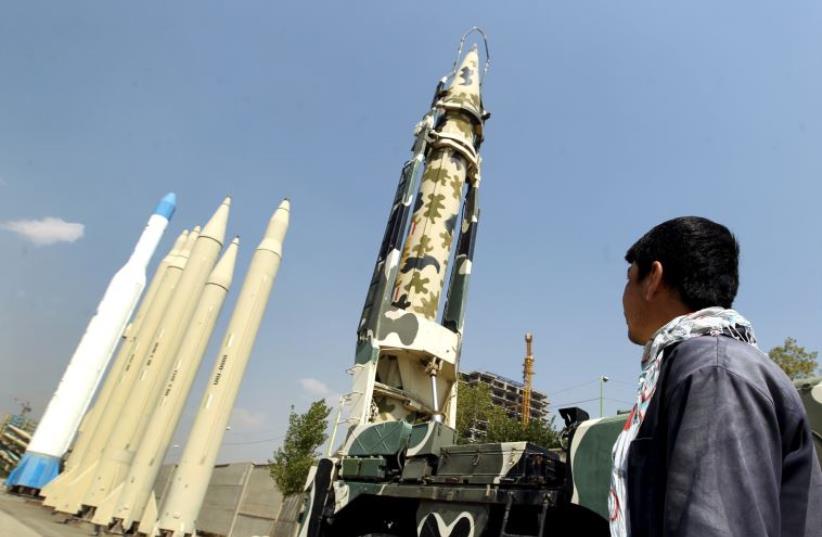 A man looks at Iranian-made missiles at Holy Defence Museum in Tehran
(photo credit: REUTERS)
Advertisement
ANKARA - A senior Revolutionary Guards commander has said that Iran's ballistic missile program will not stop under any circumstances and that Tehran has missiles ready to be fired, according to Iranian state television.Brigadier General Amir Ali Hajizadeh made his comments after a series of ballistic missile tests conducted by guard units that drew international concern, including a call by US Democratic presidential candidate Hillary Clinton for new sanctions against Iran.The tests, which state television said ended on Wednesday night, were seen as a challenge to a United Nations resolution and last year's nuclear accord with world powers under which Tehran agreed to curb its atomic program in exchange for relief from economic sanctions."Iran's missile program will not stop under any circumstances," Hajizadeh said. "The IRGC has never accepted the UN Security Council resolutions on Iran's missile work."We are always ready to defend the country against any aggressor. Iran will not turn into Yemen, Iraq or Syria," he was quoted as saying by state television.The Revolutionary Guards (IRGC) maintains an arsenal of dozens of short and medium-range ballistic missiles - the largest in the Middle East, according to the London-based International Institute for Strategic Studies.Tehran says its missile program is solely for defensive use with conventional, non-nuclear warheads.Iran's Foreign Ministry said on Wednesday that the tests were not in violation of the nuclear agreement, which led to lifting of sanctions in January.The Guards said the tests were aimed at displaying Iran's "deterrent power and its ability to confront any threat.""Some of the missiles carried 24 warheads and one tonne of TNT," said Hajizadeh, who heads the Guard's aerospace division.Hajizadeh said Iran had no intention of starting a war, "but the Zionist regime (Israel) is our enemy and we don't trust American officials.""We have underground tunnels around the country and under mountains, where we store our missiles...These tunnels cannot be destroyed even if targeted by atomic bombs," he said.State TV in October aired footage of long tunnels with ready-to-fire missiles on the back of trucks, saying the facility was one of hundreds of underground missile bases around the country.The United States imposed sanctions against businesses and individuals in January over another missile test in October 2015. But Iranian officials have repeatedly expressed Tehran's determination to develop what it called Iran's defense capabilities.The United States said on Wednesday it was aware of and reviewing reports of an additional Iranian ballistic missile test and that the administration would determine an appropriate response.US Secretary of State John Kerry spoke with Iranian Foreign Minister Mohammad Javad Zarif about the missile tests, a State Department spokesman said.But Iran's Students News Agency ISNA said on Thursday that Zarif and Kerry had not discussed the issue."John Kerry has sent emails to Zarif asking for a telephone call to discuss issues, including Iran's missile tests, but it did not happen because Zarif is on an official visit," ISNA quoted a source as saying.