In a letter, Iran's president looks forward to a speedy victory over "terrorism." 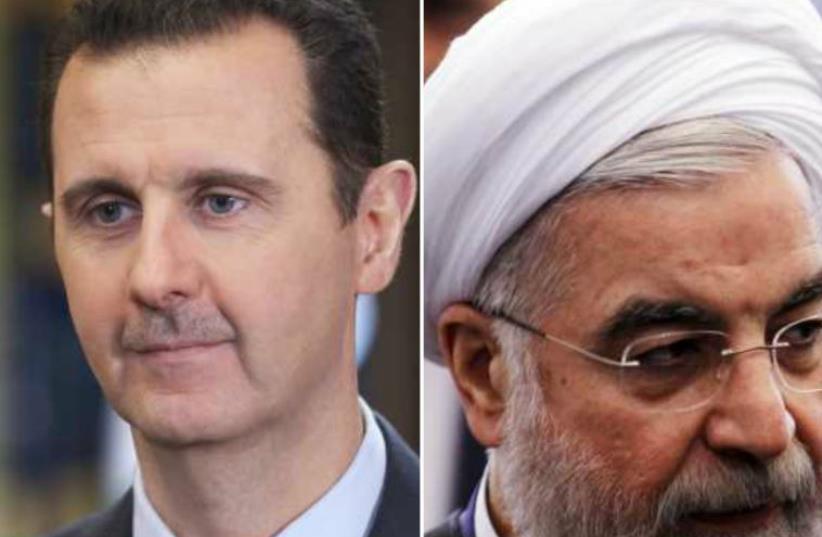 Iranian President Hassan Rouhani and Syrian President Bashar al-Assad
(photo credit: REUTERS)
Advertisement
Iranian President Hassan Rouhani expressed in a letter to Syrian President Bashar Assad on Saturday his country's willingness to aid in the post-civil war reconstruction of Syria, Iran's Tasnim news agency reported.
"The Islamic Republic of Iran... stands beside the country and people of Syria and will continue to aid it in defending against the forces of evil and returning security and stability throughout the Syrian Arab Republic," the letter states.
"We hope to swiftly witness the achievement of a final victory," Rouhani continued. "Just as the government of the Islamic Republic of Iran has stood beside the Syrian nation in its struggles and opposition to terrorism, we are also prepared to stand with you in every way possible as regards to Syria's reconstruction."
This is not the first time Iran has promised to assist in Syria's reconstruction after the end of its seven-year-long civil war. In December 2017, Iran's Revolution Guards Corps were tasked with spearheading reconstruction efforts, including rebuilding the country's electric grid and constructing an oil refinery, according to Iranian media reports.The United States is determined to prevent Iranian entrenchment in Syria. “We want to make sure that the influence of Iran doesn’t take over the area,” Nikki Haley, US Ambassador to the United Nations, told CBS's Face the Nation on Sunday.
US, British and French forces pound Syria with air strikes early on Saturday in response to a poison gas attack, April 14, 2018(Reuters)
Rouhani's letter was sent on the occasion of Syria's Evacuation Day, April 17, which marks the country's independence from French Mandate rule on that date in 1946.His comments come just one week after a US-led coalition conducted air strikes on research and development centers and storage facilities near Damascus connected to Syria's chemical weapons program. Syria, along with its allies Russia and Iran, have forcefully condemned the strikes. Rouhani's comments may come across as a threat to the West's attempt to ensure that Iran does not remain an influential force in Syria or in the rest of the region.