Since the closure of the Iran nuclear deal negotiations in July, Khamenei has intensified his efforts to block Western influences into Iranian society. 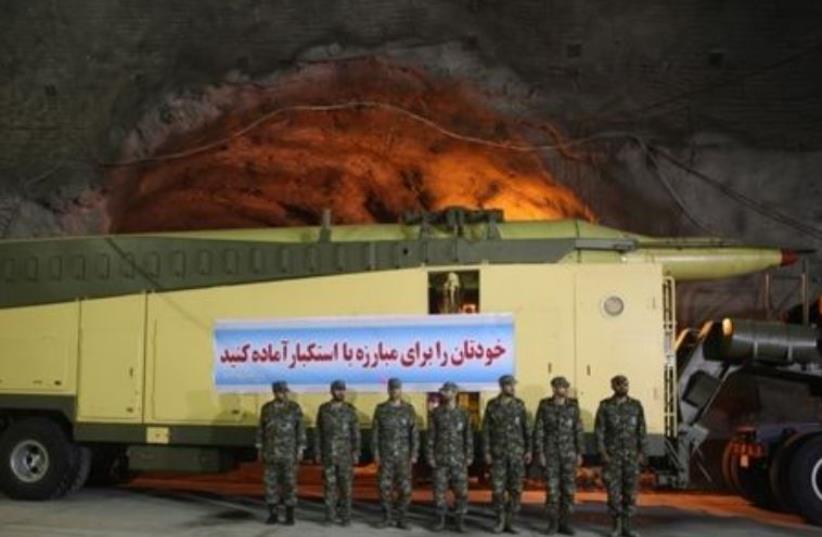 Iran reveals underground missile base‏
(photo credit: IRANIAN MEDIA)
Advertisement
WASHINGTON – Is there anything new to say about bringing about a democratic political and social order in Iran? A lively panel titled “Anti-democratic Regimes: Confrontation or Coexistence?” at the Foundation for Defense of Democracies Forum on Wednesday offered fresh insights into a post-nuclear deal world in the Islamic Republic.“Do we want regime change in Iran?” Elliott Abrams, a senior fellow for Middle Eastern Studies at the Council on Foreign Relations, asked rhetorically.His answer: “How can we not want regime change in Iran. Of course, we want it.”Abrams described Iran as a “vicious, repressive regime,” and there is no shortage of new evidence to bolster his case.Iran’s clerical regime is the world leader in juvenile executions. Just last week, gay flight attendants for Air France objected to working on the newly started Paris-Tehran route because of the Islamic Republic’s lethal homophobia.According to a 2008 British WikiLeaks cable, Iran had executed 4,000 to 6,000 gays and lesbians since the country’s Islamic Revolution in 1979.Hadi Ghaemi, the executive director for the International Campaign for Human Rights in Iran, told Reuters this month that “[President Hassan] Rouhani doesn’t seem at all interested to push for it, fight the battle and improve the human rights situation. And that’s a problem because we’re now into the third year of his term.”Back to a reorganization of Iranian society, Abrams said: “The confrontation part was missing” with Iran’s regime during the Green Movement in 2009 when Iranians flooded the streets of Tehran to oppose a fundamentally corrupt election. US President Barack Obama ignored the pleas from Iranian democrats to stand with them. In contrast to Reagan’s democracy expansion program in the Iron Curtain countries and Russia, Obama was never in the business of promoting democracy into all walks of Iranian life.Hence, Abrams said, Obama missed his Ronald Reagan moment, when he called on former Soviet leader Mikhail Gorbachev to “tear down this wall” in Berlin.“Words give you leverage” and can “undermine a regime’s political legitimacy,” said Mark Dubowitz, executive director of the Foundation for Defense of Democracies, where this writer is a fellow.He added that the US can “use nonnuclear sanctions to go after Iran for domestic repression, missile tests and terrorism.”The be-all and end-all of Iran’s system is an anti-democratic theocracy whose preservation is ruled by, as Dubowitz said, the “dedicated revolutionaries” Rouhani and the Supreme Leader Ali Khamenei.The rift between Iran’s regime, which stunts individual growth, and a restive young society has not vanished since 2009.“There is something that I believe in 100 percent and that is that democracy will come to Iran because Iran has the potential for it,” Shirin Ebadi, the Iranian 2003 Nobel Peace Prize winner, told Iran Wire on Wednesday.A window into the courtyard of that potential was on display when the Iranian marathon runner Akbar Naghdi draped himself in an American flag earlier this month to protest Iran’s refusal to grant visas to 10 American athletes. Naghdi said he did so as a “signal of friendship.”Since the closure of the Iran nuclear deal negotiations in July, Khamenei has intensified his efforts to block Western influences into Iranian society. The closure of American- style fast food franchises is one of the more salient examples.“If sanctions are not paired with strong initiatives to empower Iranian civil society, then they don’t serve the purpose of weakening the regime to the point of bringing about real social and political change. Sanctions alone without initiatives designed to empower Iranian civil society only serve the purpose of weakening the regime to the point of negotiation,” Maryam Nayeb Yazdi, a Canadian- Iranian intellectual and human rights expert based in Toronto, told The Jerusalem Post on Friday.“The international community abandoned and ignored the people of Iran and also us activists defending the voices of Iranians. Iranians watched as the economy in their country fell apart while no international body or organization was helping them to at least gain access to technology so they may empower themselves or gain independence,” she added.The key take away from many veteran expert Iran observers is not to let opponents of a democratic Iran off the hook. If past is prologue in the Islamic Republic of Iran, a new democratic upheaval might just be around the corner.