Tested on all fronts, Iran's Rouhani may struggle on reforms 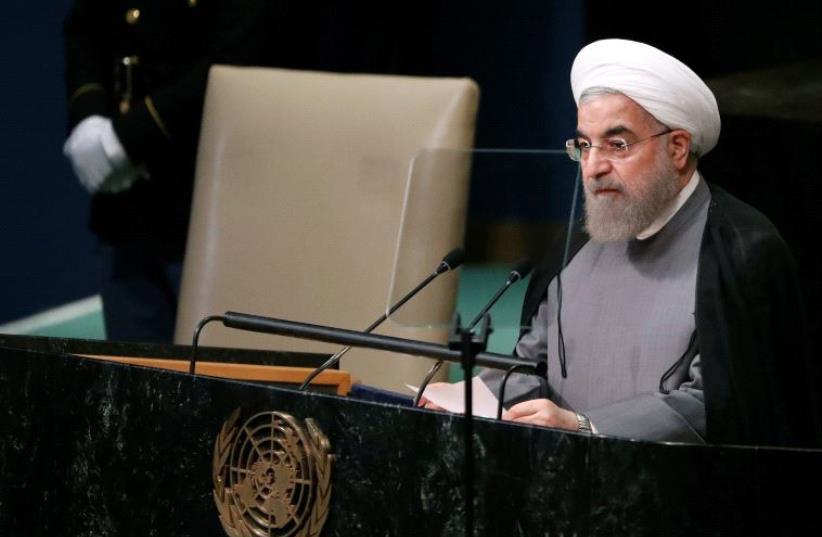 Iranian President Hassan Rouhani addresses the United Nations General Assembly in New York, September 22, 2016
(photo credit: REUTERS)
Advertisement
Growing strains with the United States and political infighting at home threaten Iranian President Hassan Rouhani's plans to expand social freedoms, create jobs and draw in foreign investment, officials and analysts say.Anti-Western hardliners defeated by Rouhani in the presidential election in May appear determined to take revenge by denying the pragmatic cleric an economic dividend, they believe.The hardliners' strategy is to stoke already-simmering tension with Washington and its Gulf Arab allies, injecting fresh political risk into a country that had been seen as a safer bet since its 2015 nuclear deal with world powers."To weaken Rouhani, they will try all possible ways, from provoking hawks in Washington to imposing more political limitations at home ... and isolating Iran economically," said a senior official who asked not to be named. "Rouhani will have very challenging months ahead."US President Donald Trump, during a May 20-21 visit to Saudi Arabia, called Iran a threat to countries across the Middle East.Rouhani later urged "moderation and rationality" in international relations. But Iran's hardline Supreme Leader Ayatollah Ali Khamenei struck a more combative note, saying Saudi Arabia's leaders faced "certain downfall" due to their alliance with Washington.A week later the Islamic Revolutionary Guard Corps (IRGC), the Shi'ite country's most powerful military force, upped the ante, disclosing it had built a third underground ballistic missile production factory and would keep developing its missile program - a project strongly opposed by Washington and its Gulf allies like Saudi Arabia.TURMOIL ACROSS MIDDLE EASTIn recent months, the Guards have stepped up support for the rebel Houthi movement in Yemen, where they are waging a proxy war with Sunni Muslim Saudi Arabia. They have increased funding and arming of militia groups in Syria and Iraq, while continuing to back traditional ally Hezbollah of Lebanon.IRGC naval vessels have repeatedly been in tense encounters with US warships in the Gulf and Strait of Hormuz, through which a third of all oil shipping passes.The escalating regional tensions will increase the nervousness of potential foreign investors, many of whom were already keeping Iranian ambitions on hold due to worries about red tape or a possible restoration of sanctions if Iran violates the nuclear deal."Rouhani will continue to solicit the return of foreign businesses ... to Iran without providing them with a much-needed change in behavior to boost their confidence,” said senior Iran analyst Behnam Ben Taleblu of the Washington-based Foundation for Defense of Democracies.Karim Sadjadpour, a senior fellow at the Carnegie Endowment, said that with the anti-Iran Trump in the White House there was less pressure on Iran's hardliners to justify their animosity toward the US."Iran's regional strategy has been consistent for four decades, regardless of who is president of the country. Opposition to the US and Israel hasn't changed, and opposition to Saudi Arabia has intensified," he said.The lifting of sanctions in 2016 partly reconnected Iran with the international financial system crucial to trade, but lingering unilateral US sanctions tied to human rights and terrorism have spooked many potential investors."Large international banks won’t (get involved) because of the US exposure, the size of the past penalties and their ongoing U.S. business and assets," said Andreas Schweitzer, senior managing partner of London-based Arjan Capital.Then there are the domestic tensions.First elected in 2013 on a pledge to ease Iran's diplomatic isolation, Rouhani spent much of his political capital on the nuclear deal, which resulted in a lifting of most sanctions in return for curbs on Tehran's nuclear program.In that effort, he enjoyed the guarded support of Khamenei. But now, under heightened pressure in his second term to widen economic opportunities for Iran's youth, Rouhani can no longer be sure of the supreme leader's backing.After a campaign featuring outspoken attacks on security and judicial hardliners and calling for a speedier opening to the world, Rouhani trounced Khamenei's perceived favorite in the election, irking the IRGC, Khamenei's ally.COLLISION PATHAndrine Skjelland, MENA country risk analyst, BMI Research, said the president's rhetoric had deepened "divisions between himself and the hardline elite."Sidelined by the nuclear deal, the Guards are trying to claw back economic clout by accusing Rouhani of favoring foreign firms over domestic ones, praising Khamenei's vision of a self-reliant economy that avoids foreign investment."Domestic political instability will impact foreign investors ... It will deter the investors from returning to Iran," said Meir Javdanfar, an Iranian-born expert on Iran at the Interdisciplinary Center Herzliya in Israel.Under US and EU sanctions, the Guards took over billion-dollar projects vacated by Western oil companies.Their influence can be felt across Iran's economy - from port operations to oil. They are estimated to have a presence in 80 percent of business interests in the country."Rouhani's re-election will put the IRGC on a bigger collision path with him," Javdanfar said. "His voters wanted moderation, while the IRGC wants to expand its reach abroad and to become more confrontational with the West."Senior members of the IRGC and its front companies remain under US sanctions. Most IRGC front companies, however, are not formally owned by the Corps, but by firms linked to it.Foreign companies need an Iranian partner to do business in Iran, which for big projects often means IRGC-controlled firms."Many businessmen are still suffering from the lack of an economic revival in Iran. They will happily accept being the IRGC's shell companies," said a trader in Tehran.Khamenei has been adept at ensuring that no group, even among hardline allies, becomes powerful enough to challenge his authority. Displeased with Rouhani's rising popularity, he will not back the president in his economic battle with the IRGC."It is a vicious circle. More economic involvement of the Guards means less foreign investors and vice versa," said a former reformist minister.