US envoy to UN: We must oust Iran, terror proxies from Syria

Remarks come after Netanyahu said that Israel hopes to reach “specific understandings” with Russia to prevent Tehran from permanently setting up a base of operations in Syria against Israel. 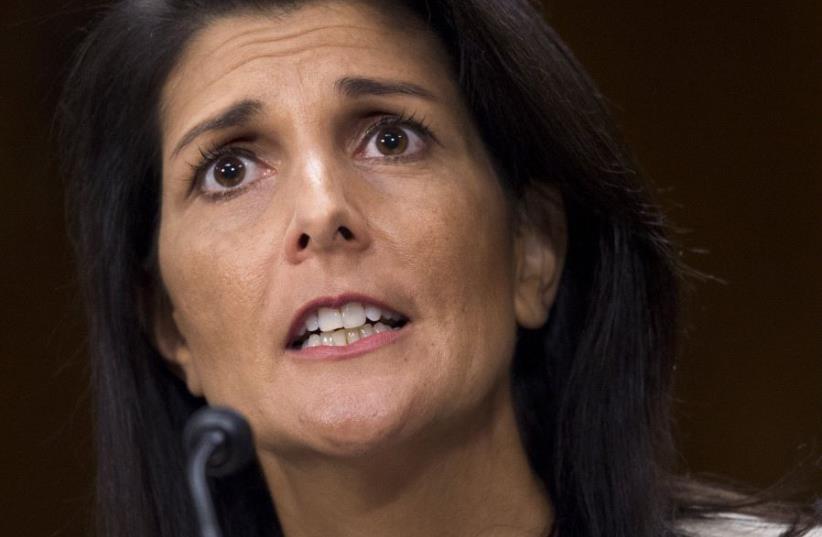 Nikki Haley
(photo credit: SAUL LOEB / AFP)
Advertisement
UNITED NATIONS - The United States supports the UN-led Syria peace talks, UN Ambassador Nikki Haley said on Wednesday, saying Syria could no longer be a "safe haven for terrorists" and that it was important "we get Iran and their proxies out."Haley spoke to reporters after UN Syria mediator Staffan de Mistura briefed the Security Council behind closed doors on 10 days of talks between the warring parties in Geneva, which ended last week.She did not respond to questions on whether the United States believed Syrian President Bashar Assad, backed by Russia and Iran, should step down.All eyes have been on how Washington would approach ending the six-year war in Syria, given pledges by President Donald Trump to build closer ties with Russia, especially in the fight against Islamic State. Trump's Syria policy has been unclear."The United States absolutely supports Staffan de Mistura and the work that he's doing, we support the UN process, we support the talks in Geneva, we want to see them continue," Haley said."This is very much about a political solution now ... and that basically means that Syria can no longer be a safe haven for terrorists, we've got to make sure we get Iran and their proxies out, we've got to make sure that, as we move forward, we're securing the borders for our allies as well," she said.Iran is backing fighters in Syria from Lebanese Shi'ite Muslim group Hezbollah.A crackdown by Assad on pro-democracy protesters in 2011 led to civil war and Islamic State militants have used the chaos to seize territory in Syria and Iraq. Half of Syria's 22 million people have been uprooted and more than 400,000 killed.De Mistura told reporters after briefing the council that he planned to convene another round of peace talks on March 23.He said the most recent round ended with an agenda and a timeline and "some agreement even on substance."
Netanyahu to discuss Syrian civil war developments in meeting with Putin in Moscow on Thursday (credit: GPO)
"We did not expect miracles and frankly we did not have miracles, but we achieved much more than many people had imagined we could have. No one left, everybody stayed," de Mistura told reporters.The remarks came after Prime Minister Benjamin Netanyahu on Sunday said that Israel hopes to reach “specific understandings” with Russia to prevent Tehran from permanently setting up a base of operations in Syria against Israel.At the opening of the weekly cabinet meeting, Netanyahu announced that he will be traveling to Moscow on Thursday for a meeting with Russian President Vladimir Putin, and the discussions will focus on current efforts to put together new arrangements in Syria. Those efforts have taken place in recent weeks in Astana, the capital of Kazakhstan, and Geneva.“With the framework of these arrangements, and also without them, there is an Iranian effort to become firmly established on a permanent basis in Syria, either through the presence of ground forces, or naval forces,” Netanyahu said. He also said the Syrians are involved in a “gradual attempt to open up a front against us on the Golan Heights.”Herb Keinon contributed to this report.