"You see they write on the side of their missiles, in Hebrew, Farsi and English, ‘Death to Israel and death to America’ — this is not a peaceful nation.” 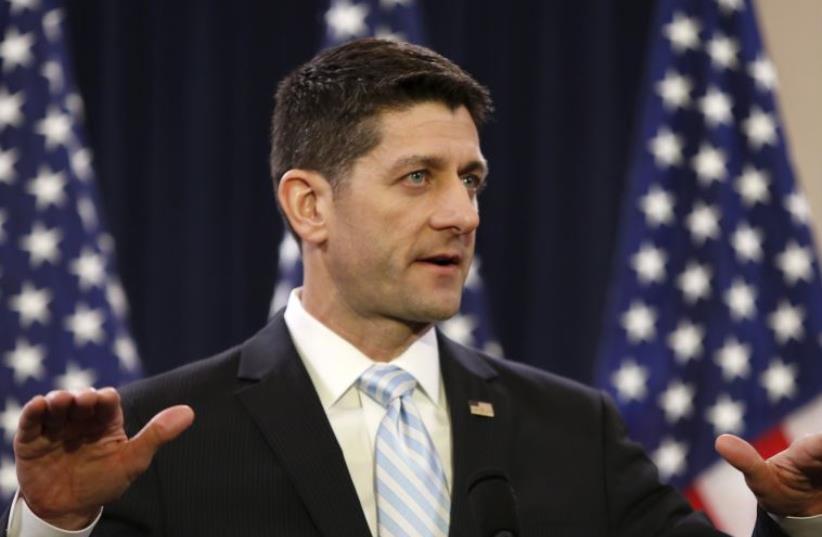 US Speaker of the House Paul Ryan
(photo credit: REUTERS)
Advertisement
WASHINGTON  – It makes more sense to rigorously enforce the Iran nuclear deal than to dismantle it, said Rep. Paul Ryan, R-Wis., the Speaker of the US House of Representatives, signaling diminishing support for pulling the United States out of the deal.Ryan, speaking on “Meet the Press” in an interview to be broadcast in full on Sunday, said the removal of sanctions under the nuclear rollback for sanctions relief deal reached in 2015 between Iran and six major world powers, meant it would be too hard to reconstitute the sanctions.“A lot of that toothpaste is already out of the tube,” he said in a segment of the interview NBC posted on its website on Friday. “I never supported the deal in the first place, I thought it was a huge mistake, but the multilateral sanctions are done. I don’t think you’re going to go back and reconstitute the multilateral sanctions that were in place.”President Donald Trump said while campaigning that the deal was a bad one and at times suggested that he would pull out of it. Other Republicans throughout the campaign pledged to kill the deal. However, since Trump’s inauguration last month, his defense secretary, James Mattis, has said pulling out of the deal would be unwise.“I think we would expend our effort where it can pay off the most and that’s why I think what they’re doing now does make a lot of sense,” Ryan said. “I think the key is to rigorously enforce this deal.”Republicans in Congress have in recent weeks introduced bills that would penalize Iran for non-nuclear activities, including ballistic missile testing. Trump this week imposed new sanctions on Iranian individuals and entities in the wake of Iran testing ballistic missiles, something that his predecessor, President Barack Obama, did a year ago.Ryan said he would back new non-nuclear sanctions.“Remember, they’re testing ballistic missiles, they’re still the largest state sponsor of terrorism in the world, human rights abuses galore,” he said. “Those are where I think we also need to ratchet sanctions.”Ryan said the Obama administration was derelict in holding Iran to account.“I think what this administration is doing which I agree with is saying we have a new administration and we’re going to hold you – Iran – to account,” Ryan said. “This last administration did not do that, this new administration needs to do that and I think that’s what they’re getting at.”Ryan said Iran’s continued belligerency toward Israel, among other factors, was a clear signal that the regime was not changing for the better.“Look at what they’re trying to do to destabilize the region with all their proxies,” he said. “Look at what they’re doing to finance terrorism, the human rights abuses, testing ballistic missiles. You see they write on the side of their missiles, in Hebrew, Farsi and English, ‘Death to Israel and death to America’ — this is not a peaceful nation.”Democrats have yet to back the new GOP-backed legislation that would add sanctions, in part because some of the new sanctions – for instance, isolating Iran’s financial sector – appear to encroach on the nuclear-related sanctions the United States has waived under the deal.The Obama administration intensified an array of non-nuclear sanctions, targeting missile testing and backing for Iranian proxies like Hezbollah, in the wake of the deal, in part to assuage concerns in Israel, where the leadership had stridently opposed the deal as enabling Iranian mischief in the region.