What did former Iranian president Ahmadinejad write to Obama?

Ahmadinejad reiterated that despite promises to improve ties between the two countries, the US is pursuing the same "hostile policies along with the same trend of enmity." 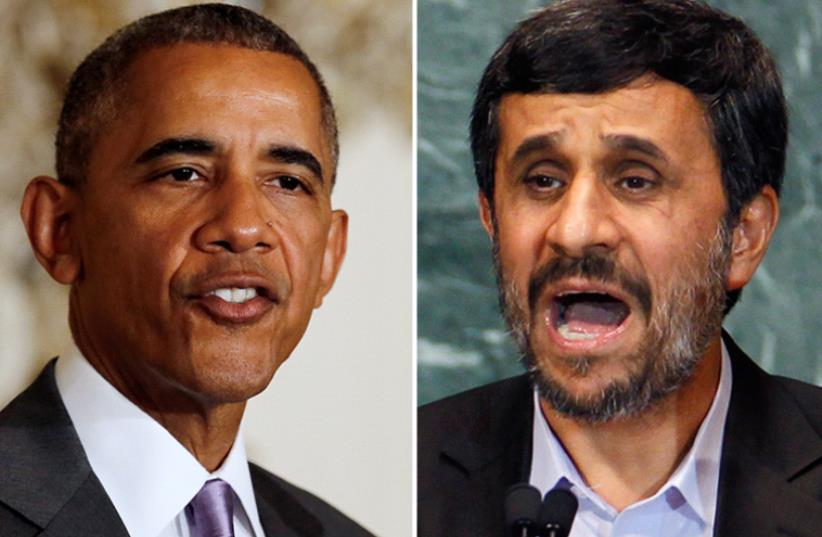 Ahmadinejad and Obama
(photo credit: REUTERS)
Advertisement
In a letter to US President Barack Obama, former Iranian president Mahmoud Ahmadinejad asked for the US to return around $2 billion of frozen assets, AFP reported. The former Iranian leader, infamous for his belligerent rhetoric toward Israel and denial of the Holocaust, reiterated that despite promises to improve ties between the two countries, the US is pursuing the same "hostile policies along with the same trend of enmity."Earlier this year, around $2 billion of Iranian foreign currency was confiscated from New York bank accounts. A US Supreme Court decision issued a historic $2 billion victory to the families of Americans killed in attacks blamed on Iran.The money would go toward satisfying a $2.65 billion judgment against Iran that the families won in US federal court in 2007 in a case filed in 2001. The money is held in New York in a trust account at Citibank, part of Citigroup Inc, but was not fully discovered until 2008-2010.A lower-court ruling stated the money should be handed over to plaintiffs representing hundreds of Americans killed or injured in the 1983 bombing of a US Marine Corps barracks in Beirut, the 1996 Khobar Towers truck bombing in Saudi Arabia, suicide bombings in Israel and other attacks.Iranian efforts to appeal the decision have been rejected by US courts and are now being pursued at the International Court of Justice."I passionately advise you not to let the historical defamation and bitter incident be recorded under your name," wrote Ahmadinejad, who is reportedly seeking to make a political comeback and run in Iran's 2017 elections.  Yonah Jermy Bob contributed to this article.