Gabriel had on Monday backed reforms pursued by President Hassan Rouhani. "The alternative to the current government is a return to the times of great confrontation," Gabriel said. 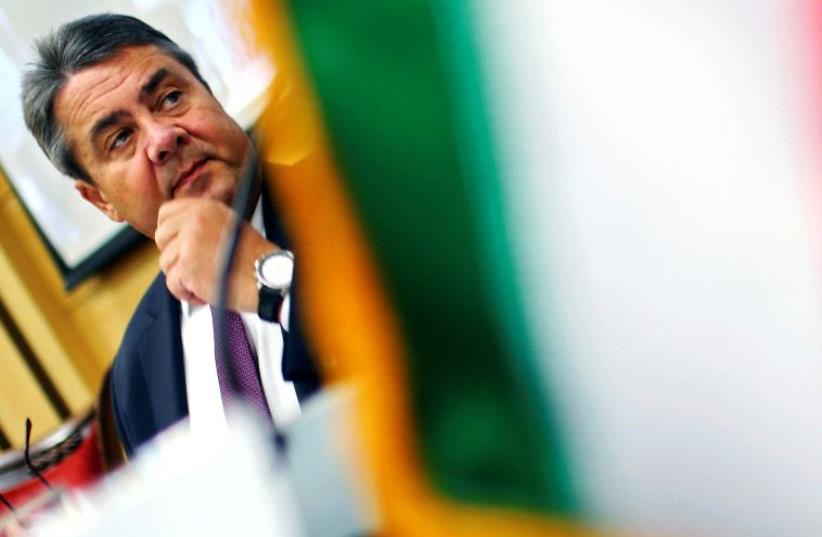 German Economy Minister Sigmar Gabriel attends a conference in Tehran, Iran October 3, 2016.
(photo credit: REUTERS)
Advertisement
The speaker of Iran's parliament, Ali Larijani, canceled talks with German Economy Minister Sigmar Gabriel on Tuesday during his high-profile trip to Tehran, snubbing the German who had earlier stressed the need for reform in the Islamic Republic.Larijani, seen as a moderate conservative in Iran, was the highest-ranking figure Gabriel was due to meet on his two-day visit aimed at boosting business ties. No reason was given for the cancellation, a spokeswoman for Gabriel said.Gabriel had on Monday backed reforms pursued by President Hassan Rouhani. "The alternative to the current government is a return to the times of great confrontation," Gabriel said.He said Germany wanted to help improve the economic lot of people in Iran so that the government did not lose support.Gabriel has also warned Tehran that to normalize relations, it must accept Israel's right to exist and urged Iran to do what it could to push for a ceasefire in Syria.Although a moderate conservative, Larijani cooperated closely with the government of pragmatist Rouhani in approving Iran's nuclear deal with world powers last year.His brother, Sadeq Larijani, head of Iran's judiciary, criticized Gabriel on Monday for his comments. "If I were in the government's position or in the foreign minister's shoes I would never let such a person come to Iran," he said.Syrian President Bashar al-Assad's forces, supported by Iranian-backed militia and Russian air power, have stepped up an offensive against rebel-held areas of Aleppo, Syria's biggest city, bombing hospitals and damaging water supplies."We have of course asked the government to do everything it can to push for a ceasefire," Gabriel said.Everyone who supports the Syrian government "and that includes Iran" shares responsibility for ending the fighting, he said. "I think Iran knows its responsibility there," he said.The United States broke off talks with Russia on Monday on implementing a ceasefire agreement in Syria, suggesting there is little hope of a diplomatic resolution to the 5-1/2 year conflict that has killed hundreds of thousands of people and displaced 11 million.Also In World NewsOfficials from Germany, France, Britain, the United States and Italy are due to meet on Wednesday to try to find a political solution.Gabriel led a delegation of business executives to Iran encourage business deals after a historic nuclear accord paved the way for ending sanctions that had been in place for years. On Monday, Siemens signed a contract to upgrade Iran's rail network.The president of Germany's DIHK Chambers of Commerce said the trip had marked an important step forward. "Now confidence must be built up," Eric Schweitzer, part of the delegation, told Reuters, adding the trip had undoubtedly helped with that.