The ice cream moguls claim Democrats looking to cause the failure of the deal are going to lead the United States to war. 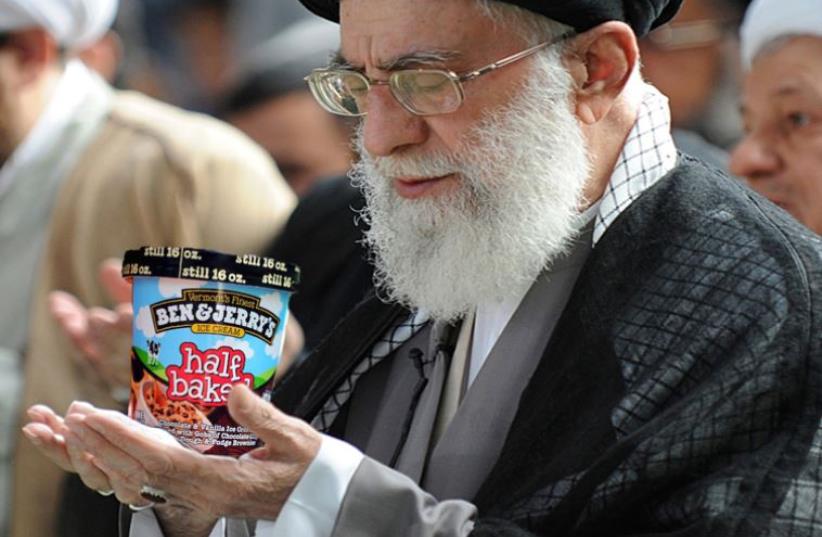 Ayatollah Ali Khamenei holding a Ben & Jerry's icecream (illustrative)
(photo credit: HO - / IRANIAN SUPREME LEADER'S WEBSITE / AFP,JPOST STAFF)
Advertisement
Ben and Jerry, the co-founders of Ben & Jerry's Ice Cream, came out in support of the Iran nuclear deal on Wednesday in an email to MoveOn.org activists, encouraging members to sign a petition supporting a donor strike - a pledge not to donate money to Democrats who are working to encourage the failure of the vote on the deal in Congress.The ice cream moguls stated that Democrats working against the deal, which is a victory for American national security, are going to lead the United States to revisit an Iraq-like war.The letter explained that when MoveOn.org members donate to the Democratic party in "moderate chunks," the small amounts donated by each person add up to millions of dollars donated to the party each year. By threatening to withhold that money, they can "send a powerful message" to the Democrats working against the deal.The pair claim that this deal is “the only peaceful way to keep Iran from obtaining nuclear weapons,” and have signed the petition "not to contribute a dime to any Democrats who put us on a path to war.""The bottom line is this: This agreement is the only way to keep us off a path to war. Major national security experts, our nation's top military brass, President Obama, John Kerry, Bernie Sanders, Elizabeth Warren, and a whole host of others all agree: the alternative to this diplomatic agreement with Iran would be war."Ben and Jerry claim that this deal is a victory for American national security and that nearly 25,000 people have already signed the petition. "War means American women and men in uniform will die. It means tens of thousands of civilians will perish. And it means billions—maybe trillions—of taxpayer dollars (which should go to things like green energy development, health care, or schools) will be drained from the federal budget," they wrote. "You know who would love that? Big military contractors and their armies of lobbyists. But the rest of us would be in deep, deep trouble." They called on fellow MoveOn.org members to join them in "sending a not-to-be-missed message" to the Democrats in Congress by agreeing to withhold any and all donations from anyone who works to sabotage President Obama's efforts.