Business as usual: Austria to sell Iran cranes for possible use in hangings 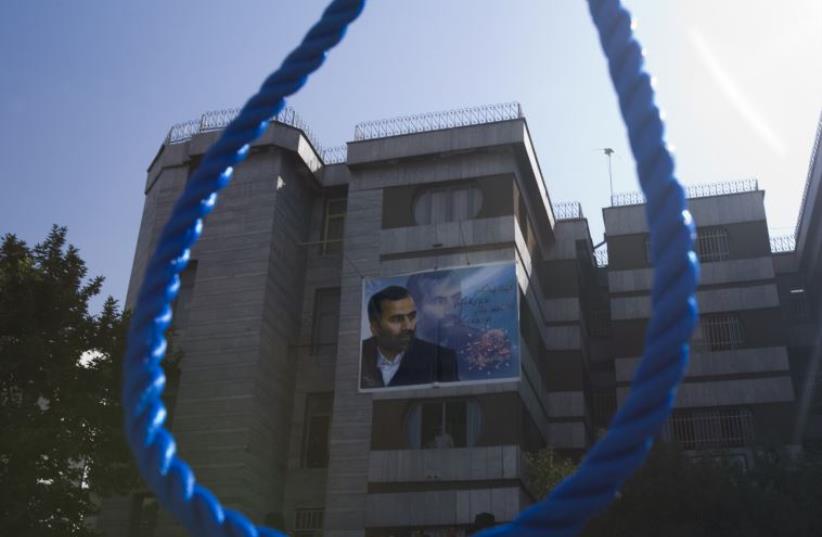 A picture of a murdered Iranian judge is seen through a noose before the hanging of his killers in Tehran
(photo credit: REUTERS)
Advertisement
BERLIN – Traditionally, Austrian governments have been the least critical of the Islamic Republic’s human rights violations. Now, Austria’s government plans to rekindle a business relationship that could involve the export of cranes, to be used to hang Iranians.The Vienna-based NGO Stop the Bomb revealed the disturbing case of the Austrian company Palfinger AG, which seeks to reenter the Iranian market where its crane equipment was previously used to for capital punishment. Company head Herbert Ortner sees Iran as a promising market where there is a strong demand for cranes because there is no local production, the Austria Press Agency reported on Thursday.Stefan Schaden, a spokesman for Stop the Bomb, said, “Palfinger is one example, which clearly shows that Austrian companies do not care at all about the disastrous human rights situation when it comes to doing business in Iran. In fact they support the regime and its inhuman policies as long as it serves their profit interests.”In an effort to deflect the damage to the company’s reputation, Palfinger said that the “construction crane in the photograph is 25 years old. It was produced in Iran with a license. Palfinger already rescinded the license... No one can prevent customers from buying used cranes abroad and using them in Iran.”The explanation was small comfort for dissidents and gays who face execution by hanging.The Islamic Republic is slated to execute as many as 1,000 people by the end of 2015, and nearly 700 Iranians were executed between January and July this year, Amnesty International says.Schaden sharply criticized Austrian politicians and business leaders for their plans to visit Iran next month. “The Austrian Economic Chamber WKÖ and Austrian politics in general encourage this attitude with the planned visit to Iran of Austrian President Heinz Fischer, Foreign Minister Sebastian Kurz, Economy Minister Reinhold Mitterlehner and WKO President Christoph Leitl. While European companies rush to do business with the Iranian regime, the Iranian population is thrown under the bus as the regime is enabled to continue with its brutal oppression.”The Austrian Economic Chamber hopes for a five-fold increase in trade as a result of the sanctions relief promised Iran in exchange for its promise not to build nuclear weapons until 2025. Austria exported €230 million in goods to Iran in 2014.Austria’s euphoria about Iran trade at the expense of human rights mirrors its posture in the 1980s.In 1984, Social Democratic foreign minister Erwin Lanc traveled to Tehran to rekindle relations with the new Islamic revolutionary government. In a largely forgotten radio interview shortly after his return to Vienna, Lanc told Austrian radio ORF that he had traveled to Tehran at the request of the Islamic Republic, and met with the leader of the Islamic Revolution, Supreme Leader Ayatollah Ruhollah Khomeini.Lanc also met with Mir Hossein Mousavi, who served as Iran’s prime minister from 1981 to 1989, and long-time foreign minister Ali Akbar Velayati, who served in the post from 1981 to 1997. Mr. Mousavi is currently under house arrest in Tehran for his activities in support of the Green movement, which challenged the stolen presidential election of 2009, in which he ran against Mahmoud Ahmadinejad.Lanc traveled to Iran with an Austrian business delegation, and stressed that Iran’s aim was to develop a “long-term technological partnership” with Austria. According to Lanc’s presentation, the Iranian side expressed interest in a long-term trade alliance.When an Austrian radio journalist asked him about the deterioration of human rights in Iran, Lanc demurred, replying that he did not wish to “repeat the details” of his talks. Lanc merely noted that there were “different human rights” views and Austria and Iran stem from “two different formed religions.”Lanc remarked that future relations between Austria and Iran would be characterized by “critical talks.” They have entailed much talk, but no meaningful criticism. Subsequently, he laid the groundwork for Iran’s return to the international community, which has largely brought it in from the cold, and ended its political and economic isolation.To paraphrase a certain 19th-century German philosopher: History repeats itself first as farce and then as a crude and cynical farce.Benjamin Weinthal reports on Iranian human rights and is a fellow for the Foundation for Defense of Democracies.