'Death to the Saudi dynasty,' Iranians chant as anger rises over hajj stampede

Saudi Arabia suggested pilgrims failing to follow crowd control rules bore some blame for the worst disaster at the event for 25 years. 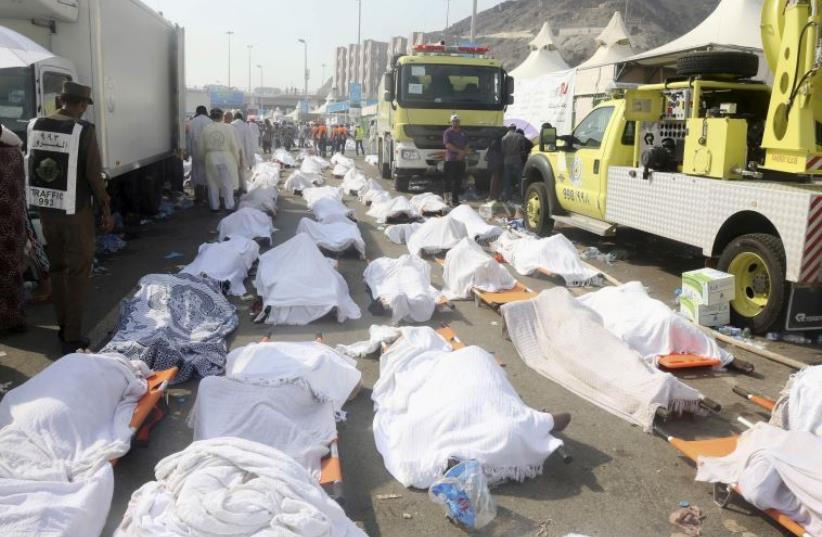 Bodies of Muslim pilgrims are seen after a stampede at Mina, outside the holy Muslim city of Mecca
(photo credit: REUTERS)
Advertisement
Saudi Arabia, under growing pressure to account for a crush that killed more than 700 people at the haj pilgrimage, on Friday suggested pilgrims failing to follow crowd control rules bore some blame for the worst disaster at the event for 25 years.The kingdom's regional rival Iran expressed outrage at the deaths of 131 of its nationals at the world's largest annual gathering of people, and politicians in Tehran suggested Riyadh was incapable of managing the event."Death to the Saudi dynasty!" hundreds of demonstrators chanted at a protest in the Iranian capital Tehran.Saudi Health Minister Khalid al-Falih said an investigation would be conducted rapidly and a final toll of dead and wounded calculated. At least 863 pilgrims were injured."The investigations into the incident of the stampede that took place today in Mina, which was perhaps because some pilgrims moved without following instructions by the relevant authorities, will be fast and will be announced as has happened in other incidents," Falih said in a statement.Falih's comments were likely to be seen by the kingdom's critics as an attempt to deflect responsibility for the incident: Safety during haj is politically sensitive for the kingdom's Al Saud dynasty, since the ruling family presents itself internationally as the guardian of orthodox Islam and custodian of its holiest places in Mecca and Medina.With photographs of piles of the dead circulating on social media and pilgrims frantically searching for missing compatriots, the effort to uncover the facts and assign blame was likely to grow more acute and possibly more political.The disaster appeared to put pilgrims on edge.Hakim, from Morocco, said: "It is simply scary to hear how people crushed one another. More frightening is that we do not know how it happened."A pilgrim who asked to be identified only as Abu Abdallah said security forces appeared on high alert after the deaths. "What happened is a tragedy and many people ... are terrified, but in the end we can only pursue our Hajj duties."Saudi King Salman ordered a review of hajj plans after the disaster, in which two big groups of pilgrims collided at a crossroads in Mina, a few km (miles) east of Mecca, on their way to performing the "stoning of the devil" ritual at Jamarat.Iran's President Hassan Rouhani, in New York to attend the UN General Assembly, echoed Supreme Leader Ayatollah Ali Khamenei in blaming Saudi Arabia for the incident."I ask the Saudi Arabian government to take responsibility for this catastrophe and fullfil its legal and Islamic duties in this regard," Rouhani said in a statement published on the state news agency IRNA.Iranian state television said the demonstrators in Tehran were showing their anger at "Saudi incapability and incompetence to run the hajj.""The world will not accept excuses like the weather was hot or the pilgrims were disorganized," Tehran Friday prayer leader Mohammed Emami-Kashani was quoted as saying by Fars news agency.Iran's deputy Foreign Minister, Hossein Amir Abdollahian also called "Riyadh's negligence inexcusable" and announced a committee has been established to look into the incident.Iranians pilgrims who survived the deadly incident described Saudi's response "too little, too late," according to Iran's state run Press TV. They said the rescuers arrived at the scene two hours after the incident and started collecting dead bodies first instead of helping the injured.Saudi Arabia's Interior Ministry spokesman Major General Mansour Turki was quoted in Saudi media on Friday as saying the security forces had immediately responded and begun to rescue those who fell in the crush."This year's hajj ceremony was disorganized as the Saudi government had hired young and inexperienced people," Saeed Ohadi, head of Iran's hajj and pilgrimmage organization told Iran's state broadcaster in a live interview from Mecca.Speaking in New York, Pope Francis expressed "my sentiments of closeness" with the world's Muslims after the tragedy. UN Secretary General Ban Ki-moon and the United States offered condolence.In Islamabad, the Pakistani ministry of religious affairs said seven Pakistanis were dead and six were injured.Former Iraqi Prime minister Nuri al-Maliki, an ally of Iran and foe of Riyadh, said the incident was "proof of the incompetence of the organizers of the pilgrimage season."He said the hajj should be placed under the authority of the Organization of Islamic Cooperation, the world's largest Muslim organization.