Amidror: If Iranian jets arrive in Syria, Israel would ‘only act if they threaten us’ 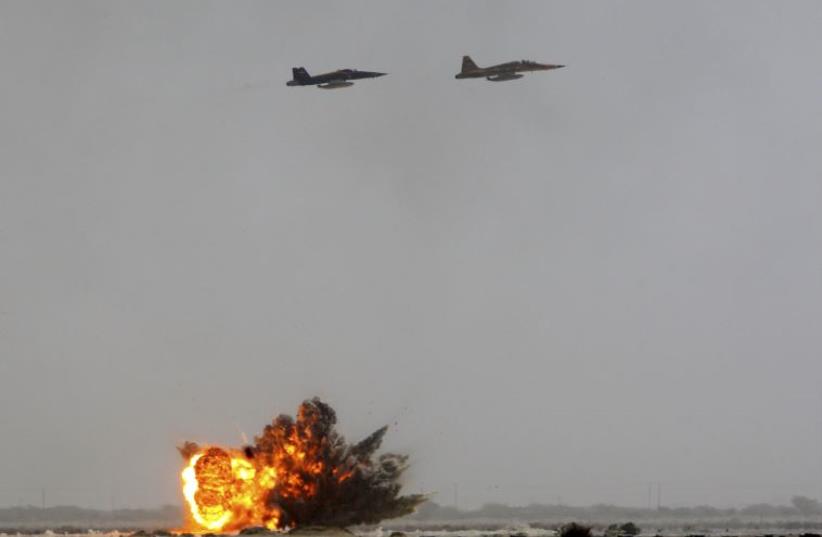 Iranian air force fighter planes drop bombs on targets during manoeuvres in southern Iran June 24, 2009.
(photo credit: FARS)
Advertisement
Israeli remained officially silent on Sunday over reports from last week that Iran will send fighter jets to Syria to take part in Russian air strikes against rebel organizations.According to an unconfirmed report in the Kuwaiti newspaper Al-Rai, two Iranian squadrons of Sukhoi fighter jets will be based in the Western Syrian city of Homs.Maj.-Gen. (res.) Yaakov Amidror, former national security adviser to Prime Minister Benjamin Netanyahu, didn’t rule out the possibility that Iran would be carrying out air activity in Israel’s immediate vicinity.“Anything can happen,” he told The Jerusalem Post on Sunday. Israel would “not have to respond so long as the Iranian jets don’t interfere with us. We are free to dislike it, but if they don’t interfere with us, they can bomb their targets. It doesn’t require a change of course on our part,” said Amidror, a senior fellow at the Begin-Sadat Center for Strategic Studies.Amidror was chief intelligence officer of the IDF Northern Command, and served as director of the Intelligence Analysis Division in the IDF’s Military Intelligence Directorate.The Iranian planes, he said, do not pose a significant aerial threat to Israel, and could not challenge Israeli air superiority in any location. If, on the other hand, the jets act to threaten Israel or its air activities, the Israel Air Force “will have to shoot them down. There would be no hesitation here,” he added.Yiftah Shapir, head of the Middle East Military Balance Project at the Institute for National Security Studies in Tel Aviv, said the Sukhoi jets in question are “very old.”Iran received Sukhoi-25 planes from Iraq during the First Gulf War in 1991, when Saddam Hussein smuggled them to his Iranian neighbors, he said.“Then, in the 1990s, Iran got more Sukhoi 24s and 25s from Russia.”Shapir said it is fair to assume that the on-board electronic systems inside the jets are also old. On the other hand, he noted, Iran has made progress in its precision weapons production capabilities.Last week, quoting Al-Rai, the Lebanese NOW news site reported: “‘The Iranian participation [in the Syrian conflict] is headed for more advancement with preparation for the arrival of two fleets of Iranian planes,’ sources in the Damascus joint operations room of the ‘4+1’ military coalition of Russia, Iran, Iraq, Syria and Hezbollah told Al-Rai’s newspaper’s chief international correspondent, Elijah J. Magnier.”NOW cited Al-Rai as saying that Iranian Sukhoi jets “would be deployed to the Tiyas (T4) airbase east of Homs after Iranian engineers finish preparations at the facility, which is near the Al-Shayrat base where Russia already plans to begin operating from.”“Iran and Russia have agreed that Moscow will perform all repair operations needed by these combat fleets along with provision of the necessary ammunition and the development of the launch systems of these Iranian planes,” NOW wrote. Iran reportedly viewed the coming aerial intervention “as an opportunity for its pilots to gain valuable operational experience.”