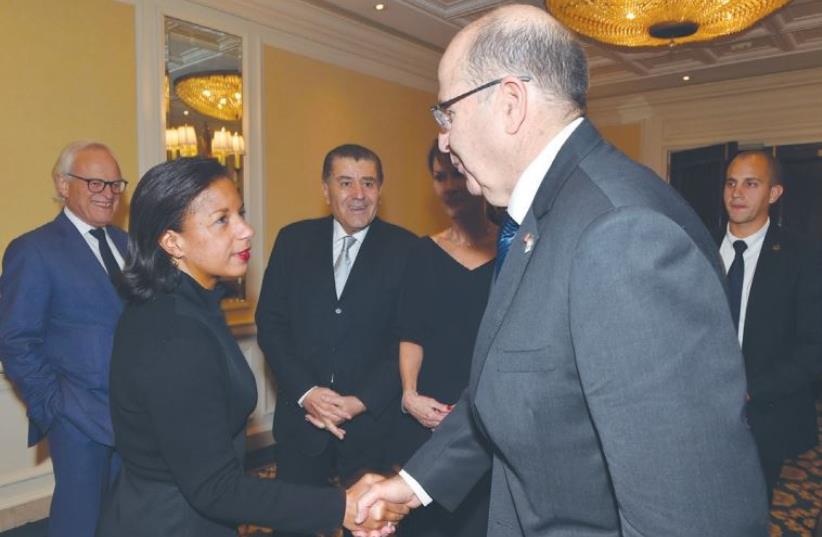 DEFENSE MINISTER Moshe Ya’alon shakes hands with US National Security Adviser Susan Rice at the Saban Forum in Washington as Haim Saban (center) looks on
(photo credit: ARIEL HERMONI / DEFENSE MINISTRY)
Advertisement
Defense Minister Moshe Ya’alon has issued a stark warning about a post-nuclear deal regional reality in which Iran’s weapons industry will receive a significant cash boost from sanctions relief to mass produce advanced arms for Iranian proxies, chief among them Hezbollah.Speaking in Washington on Thursday to US Senators John McCain and Jack Reed from the Senate Armed Services Committee, and later with senators from the Committee on Foreign Relations, the defense minister said, “The Iranian weapon industry is very serious, and very advanced.“It is not stopping in its attempts to develop advanced weapons that threaten not only Israel, but also other regional states and beyond the region. Now, thanks to the large quantity of money that will begin flowing to it after the lifting of the sanctions, it will begin manufacturing much more high-quality weapons, and will arm terrorist organizations in the region, particularly Hezbollah, Hamas and Palestinian Islamic Jihad.”Ya’alon said Iran is working “tirelessly to arm Hezbollah with advanced weapons,” saying, “In Gaza, there is a local arms industry that manufactures rockets, drones and other weapons, and it is based on Iranian knowledge and instructions.”The Islamic Republic will not change its ideology or its ambitions, which include trying to harm the State of Israel through a variety of ways, especially terrorist attacks, Ya’alon stated.“We do not allow, for example, the opening of a terrorist front against us from the Golan Heights, and when necessary, we know how to act to thwart such intentions,” he said.Looking ahead, Ya’alon said Iran and its proxies will become “more powerful in the coming years, and there is, therefore, a bigger significance in terms of safeguarding Israel’s qualitative edge over countries in the region.”He described recent talks with US leaders, including Defense Secretary Ashton Carter, as being “very deep and very good. There is a great understanding for Israel’s unique security needs in light of the significant changes occurring in the area, and we value and appreciate the American commitment to the security of the State of Israel.”