Iranian casualties rise in Syria as Tehran ramps up role

Since early October, nearly 100 Revolutionary Guard fighters or military advisers, including at least four senior commanders, have reportedly been killed in embattled Syria. 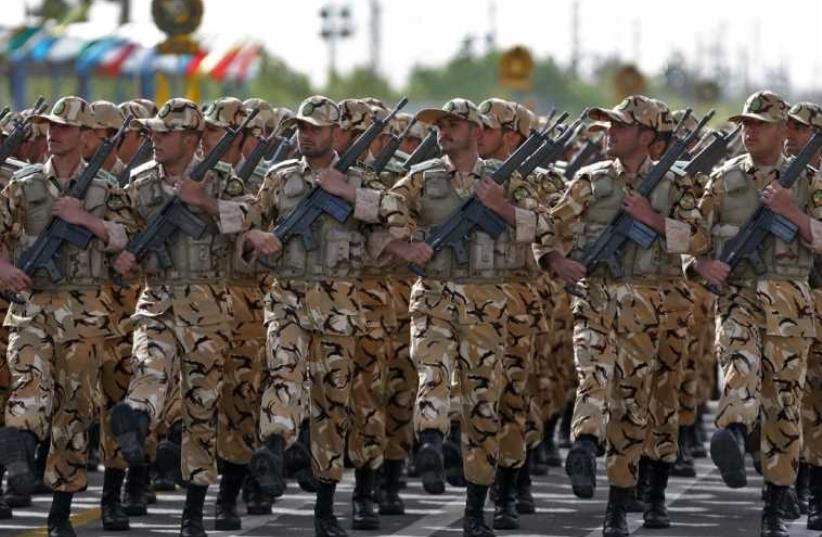 Iranian soldiers take part in a military procession in Tehran
(photo credit: Courtesy)
Advertisement
BEIRUT - The vehicle carrying Iranian Brigadier General Hossein Hamedani was passing through the outskirts of Aleppo on the afternoon of October 8 when it was shot up by Islamic State fighters.Hamedani was hit in the left eye by a bullet and died after the driver lost control of the vehicle. He was the most senior Revolutionary Guard commander to be killed in Syria to date and also one of a growing number of Iranian military personnel to lose their lives there.The death of Hamedani, who played a vital role in Iranian military efforts in Syria, was described by a representative of Supreme Leader Ayatollah Ali Khamenei in the Revolutionary Guards and published by the Entekhab news site in mid-October.It was an event that marked the start of a new development in Iran's military involvement in Syria, where experts believe Tehran may have as many as 3,000 troops.Since early October, nearly 100 Revolutionary Guard fighters or military advisers, including at least four senior commanders, have been killed there, according to a tally from Iranian websites.That is only slightly less than half of all the casualties suffered by the Guard in Syria since the beginning of 2012, when death notices began to appear.Syria's war has drawn in diverse powers: Iran has allied with Russia in supporting president Bashar Assad while Saudi Arabia, Turkey and Qatar have been backing the opposition.The United States, France and Britain have been carrying out attacks in Syria primarily targeting Islamic State, which controls broad swathes of territory in both Syria and Iraq.The conflict has heightened sectarian tension across the region as Iran has rallied Shi'ite fighters from Iraq, Lebanon, Afghanistan and Pakistan to fight a mostly Sunni opposition.An alleged Israeli air strike was reported to have killed a Hezbollah leader in Damascus on Saturday in the latest attack on the Iranian-backed group in Syria.And while the United Nations Security Council on Friday approved a resolution backing plans for a Syria peace process, obstacles to ending the war remain daunting, with no side able to secure a clear military victory.HEAVY PRICEThe death of the Revolutionary Guard members is an indication of Iran's increased involvement in fighting in Syria - and the heavy price its soldiers are paying - as it props up a Syrian army hit hard by nearly five years of conflict."The Iranians have increased the extent of their direct military involvement in the conflict mostly in order to make up for the heavy attrition among Syrian army units," said Hilal Khashan, a political science professor at the American University of Beirut.The Syrian army has recently had to take a back seat as Iran and its allied militias take the lead in the fight against the opposition."The SAA (Syrian Arab Army) is a gutted institution," said a Western diplomat in Beirut who asked not to be identified. "There's defections, there's fleeing."The timing of Iran's increased involvement in the conflict, particularly in the fight for control of Aleppo, was coordinated with the start of Russia's air campaign in late September.The Iranians have shown their commitment to the new effort and coordinated operations on the ground by sending in senior commanders like Hamedani, who played a key role in suppressing protests following the disputed 2009 presidential election in Iran.The influx of Iranian troops, along with Russian air support, allowed the Syrian army to break the siege of the Kweiris airbase in Aleppo province in early November but otherwise the new coalition has made only incremental gains around Aleppo.And while Hamedani may have been individually targeted by Islamic State, the bulk of the Guard commanders who have been killed recently died in combat."They were killed in clashes," said Rami Abdulrahman, who runs the British-based Syrian Observatory for Human Rights, which monitors the war via contacts on the ground.That is not a new development for Iran: Guard commanders regularly visited frontline troops during the Iran-Iraq war in the 1980s. It was a way to boost morale and show camaraderie with ordinary soldiers."At the time of the Iran-Iraq war it was the same: high- ranking officers from the Revolutionary Guards would go to the front lines and sometimes they would get killed," said Mohsen Sazegara, a founding member of the Revolutionary Guards who is now a US-based dissident."It's a tactic. They see it as a kind of sacrifice so they don't sit in the back and let others fight."