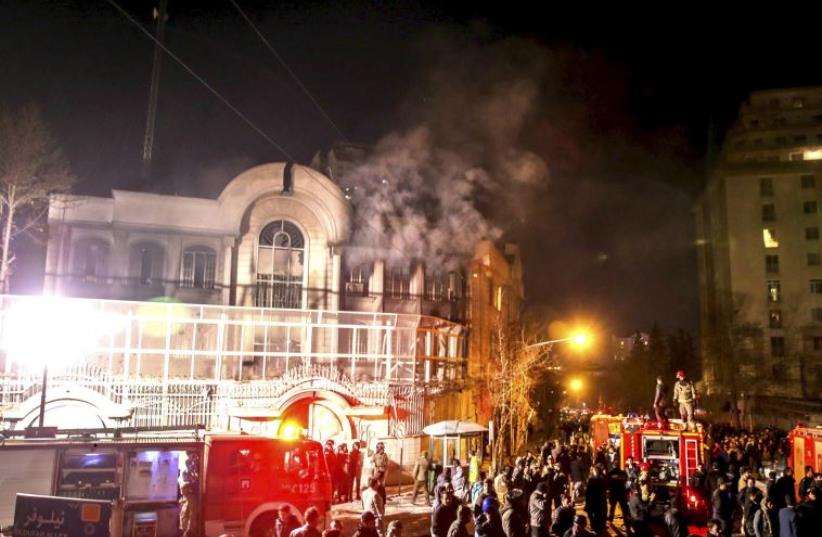 Flames rise from Saudi Arabia's embassy during a demonstration in Tehran January 2, 2016
(photo credit: REUTERS)
Advertisement
DUBAI/RIYADH - Iranian protesters stormed the Saudi Embassy in Tehran early on Sunday morning as Shi'ite Muslim Iran reacted with fury to Saudi Arabia's execution of a prominent Shi'ite cleric.Demonstrators who had massed at the embassy gates to protest at Nimr al-Nimr's execution broke into the embassy and started fires before being cleared away by the police, Iran's ISNA news agency reported. Pictures were tweeted that showed parts of the interior on fire and smashed furniture inside one office.Shortly afterwards, Iran's Foreign Ministry issued a statement calling for calm and urging protesters to respect the diplomatic premises, the Entekhab news website reported.Iran's hardline Revolutionary Guards had promised "harsh revenge" against the Saudi Sunni royal dynasty for Saturday's execution of Nimr, considered a terrorist by Riyadh but hailed in Iran as a champion of the rights of Saudi Arabia's marginalized Shi'ite minority.Meanwhile on Sunday, Iranian Supreme Leader Ayatollah Ali Khamenei, attacking Saudi Arabia for the second straight day over its execution of the Shi'ite cleric, said politicians in the Sunni kingdom would face divine retribution for his death."The unjustly spilled blood of this oppressed martyr will no doubt soon show its effect and divine vengeance will befall Saudi politicians," state TV reported Khamenei as saying. It said he described the execution as a "political error".Nimr, the most vocal critic of the dynasty among the Shi'ite minority, had come to be seen as a leader of the sect's younger activists, who had tired of the failure of older, more measured leaders to achieve equality with Sunnis.Although most of the 47 men killed in the kingdom's biggest mass execution for decades were Sunnis convicted of al-Qaida attacks in Saudi Arabia a decade ago, it was Nimr and three other Shi'ites, all accused of involvement in shooting police, who attracted most attention in the region and beyond.The move appeared to end any hopes that the appearance of a common enemy in the form of the Islamic State militant force would produce some rapprochement between the region's leading Sunni and Shi'ite Muslim powers, who back opposing sides in wars currently raging in Syria and Yemen.The website of Iran's Supreme Leader, Ayatollah Ali Khamenei, carried a picture of a Saudi executioner next to notorious Islamic State executioner 'Jihadi John', with the caption "Any differences?", and Iran's powerful Revolutionary Guards said "harsh revenge" would topple "this pro-terrorist, anti-Islamic regime".Saudi Arabia summoned the Iranian ambassador, only to see its embassy stormed soon afterwards.IRAQ ALSO FURIOUSIn Iraq, whose Shi'ite-led government is close to Iran, prominent religious and political figures demanded that ties with Riyadh be severed, calling into question Saudi attempts to forge a regional alliance against Islamic State, which controls swathes of Iraq and Syria.Despite the regional focus on Nimr, the executions seemed mostly aimed at discouraging jihadism in Saudi Arabia, where dozens have died in the past year in attacks by Sunni militants.The ruling Al Saud family has grown increasingly worried in recent years as Middle East turmoil, especially in Syria and Iraq, has boosted Sunni jihadists seeking to bring it down and given room to Iran to spread its influence. A nuclear deal with Iran backed by Saudi Arabia's biggest ally and protector, the United States, has done little to calm nerves in Riyadh.But Saudi Arabia's Western allies, many of whom supply it with arms, are growing concerned about its new assertiveness in the region and at home.The US State Department said Nimr's execution "risks exacerbating sectarian tensions at a time when they urgently need to be reduced". The sentiment was echoed almost verbatim by EU foreign policy chief Federica Mogherini and an official at the German Foreign Ministry.The State Department also urged the Saudi government to "respect and protect human rights, and to ensure fair and transparent judicial proceedings in all cases", as well as to permit peaceful expression of dissent and work with all community leaders to defuse tensions.The simultaneous execution of 47 people - 45 Saudis, one Egyptian and a man from Chad - was the biggest mass execution for security offenses in Saudi Arabia since the 1980 killing of 63 jihadist rebels who seized Mecca's Grand Mosque in 1979.