Registration opened on Thursday for February's election of the Assembly of Experts, the clerical body that appoints the supreme leader. 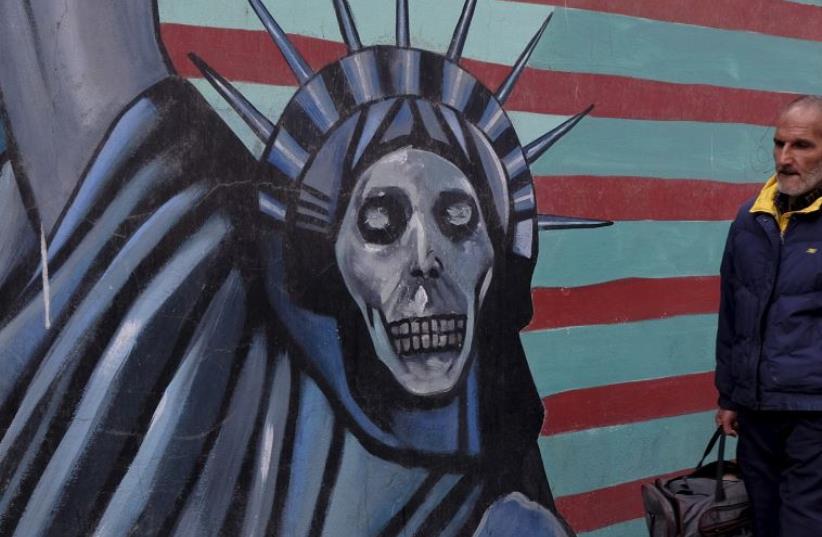 An Iranian man walks past a mural on the wall of former US embassy in Tehran
(photo credit: REUTERS)
Advertisement
The head of Iran's armed forces on Friday strongly attacked suggestions that Iran's supreme leader could be succeeded by a council, and warned of "plots" against the country's unity.Registration opened on Thursday for February's election of the Assembly of Experts, the clerical body that appoints the supreme leader.The assembly has the right to replace the supreme leader - currently Ayatollah Khamenei - but in practice no one expects that to happen. Most speculation is about how it would arrange the succession after Khamenei's death.Last week Akbar Hashemi Rafsanjani, former president and influential member of the Assembly of Experts, said it would consider choosing a council of leaders, instead of a single ayatollah who rules for life."We never had council of leaders in history or a council that commands the army," said Hassan Firouzabadi, chief of staff of the armed forces, in a statement published by the Fars news agency."All the plots have failed, now they have resorted to the new trick of a council of leaders ... to undermine our progressive and stable leadership," he added."If the leadership becomes a council the country would suffer," he said. "And our strong unity against America, Zionists and imperial enemies would collapse."The supreme leader is commander-in-chief of the armed forces and appoints the heads of the judiciary. Key ministers are selected with his agreement and he has the ultimate say on Iran's foreign policy and nuclear program. By comparison, the president has little power.Moderate President Hassan Rouhani and his powerful ally, Akbar Hashemi Rafsanjani, are hoping to cash in on the popularity they gained by reaching a nuclear deal with world powers, and win a majority in the assembly.Ayatollah Khamenei is 76, so the next assembly of 88 elected clerics may play a crucial role in choosing his successor since its members are only elected every eight years.In recent years some members of the assembly have privately called for changes to the leadership model, suggesting Khamenei's successor could serve for a fixed term rather than for life, and that a council of leaders could fill the position.Khamenei has dismissed all talk of reform as long as he is supreme leader.