Iran's Supreme Leader and a number of hardliners have maintained a harsh tone against the US despite the signing of the nuclear deal with world powers. 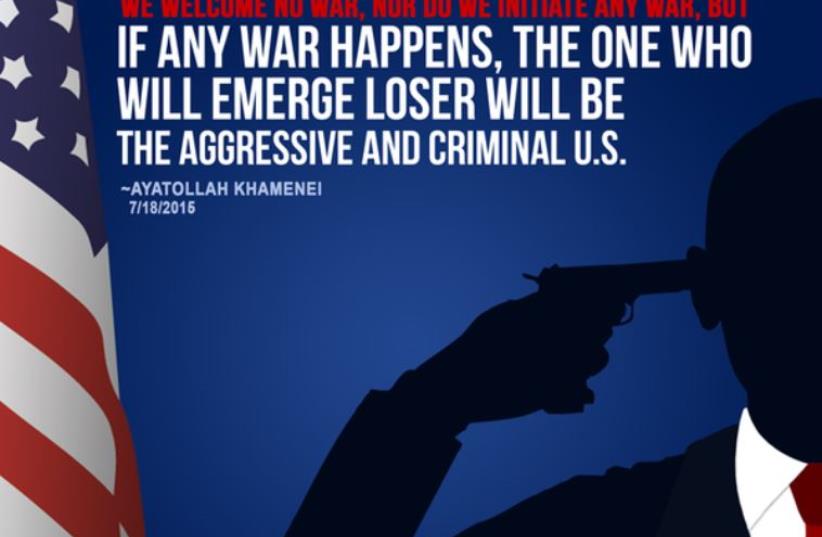 Iran's Supreme Leaders tweets his message regarding Barack Obama's comments on Iran.‏
(photo credit: TWITTER)
Advertisement
In his latest rhetorical dismissal of Washington, Iran's Supreme Leader tweeted a warning against any military action against Iran by what he called the "aggressive and criminal US."Appearing on Ayatollah Khamenei's official Twitter account, the social media post features a quote from the Islamic Republic's premier cleric reading "we welcome no war, nor do we initiate any war, but if any war happens the who will emerge loser will be the aggressive and criminal US."Below the threat, a silhouette resembling US President Barack Obama can be seen holding a gun against his own head, as if to suggest that any sort of strike against Tehran would be a suicidal move for the American leader.
Khamenei: Deal or no deal, Iran won"t stop opposing US, supporting people of Palestine

US president has said he could knock out Iran’s military. We welcome no war, nor do we initiate any war, but.. pic.twitter.com/D4Co7fVuVg
— Khamenei.ir (@khamenei_ir) July 25, 2015

Iran's Supreme Leader and a number of the his country's hardliners have been outwardly critical of the recent agreement reached between their country and the P5+1 nations, including the US. Earlier this month, Khamenei reassured worshipers that "even after this deal our policy towards the arrogant US will not change." The Ayatollah had also pledged that his country would "never stop supporting our friends in the region", and highlighted places such as Palestine, Yemen, Syria, Iraq and Lebanon, all of whom have hosted proxies or allies of Iran.Last week the commander of the Islamic Revolutionary Guards Corps, Mohammad Ali Jafari, said that several sections of the finalized deal reached between the world powers and his country "clearly crossed the Islamic Republic's red lines, especially in Iran's military capabilities." "We will never accept it," he added.