The latest reports of a surge in hacking attacks come after a landmark international agreement in July that eased severe economic sanctions on Iran in return for Tehran curbing its nuclear program. 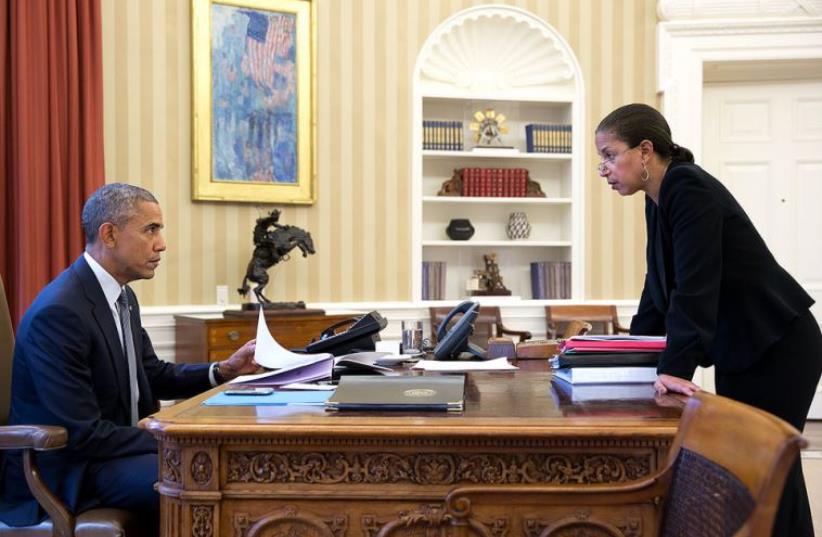 US President Barack Obama (L) confers with his national security adviser, Susan Rice
(photo credit: OFFICIAL WHITE HOUSE PHOTO / PETE SOUZA)
Advertisement
Iran's Revolutionary Guards stepped up hacking of email and social media accounts of Obama administration officials in recent weeks in cyber attacks believed linked to the arrest of an Iranian-American businessman in Tehran, the Wall Street Journal reported on Wednesday.The newspaper, citing unnamed US officials, said people working on Iran policy appeared to be the focus of the cyber attacks, with personnel in the State Department's Office of Iranian Affairs and the Bureau of Near Eastern Affairs among those hacked. Other targets included journalists and academics.The latest reports of a surge in hacking attacks come after a landmark international agreement in July that eased severe economic sanctions on Iran in return for Tehran curbing its nuclear program to ensure it is not used for developing weapons.The Revolutionary Guards, a powerful branch of the Iranian military, have regularly made hacking attacks on US government agencies in recent years, but a source told the Journal the hacking increased after the arrest of Siamak Namazi in mid-October."We're aware of certain reports involving Iran," a senior administration official told Reuters in response to the Journal story. "While I don't have a comment on the specific reports, we are aware that hackers in Iran and elsewhere often use cyber attacks to gain information or make connections with targets of interest."Namazi is head of strategic planning for Crescent Petroleum, an oil and gas company in the United Arab Emirates and has worked for think tanks in Washington. He had been detained and interrogated regularly by the Revolutionary Guards before his arrest.US officials believe some of the more recent attacks may be linked to reports of detained dual citizens and others," a source told the Journal.Namazi's friends and business associates said Revolutionary Guards confiscated his computer after ransacking his family's home in Tehran, the Journal reported.A spokesman at Iran's UN mission in New York told the newspaper that Tehran had been falsely accused of cyber attacks.