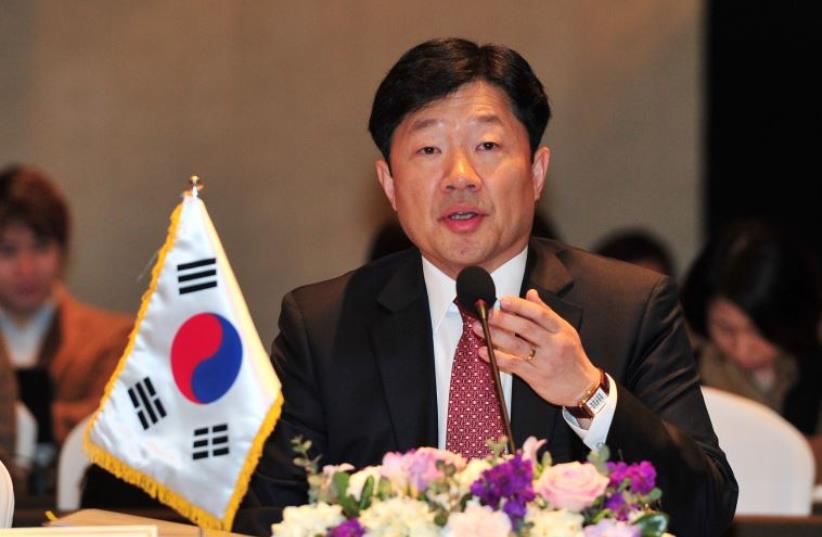 South Korean deputy trade minister Woo Tae-Hee
(photo credit: JUNG YEON-JE/AFP)
Advertisement
SEOUL - South Korean government and corporate officials are visiting Iran this week to hunt out possible deals in the oil, gas and construction industries since an agreement was reached to lift sanctions on Tehran.Iran is targeting oil and gas projects worth $185 billion by 2020, after reaching a nuclear deal last month with six major world powers, under which sanctions set by the United States, the European Union and the United Nations are due to be lifted.The sanctions are unlikely to be removed until next year, however, as the deal requires approval by the US Congress. Nuclear inspectors must also confirm Iran is complying with the deal.South Korean deputy trade minister Woo Tae-hee visits the Islamic nation on Sunday and Monday, accompanied by officials of his ministry and state-run oil, gas and resources firms, the ministry of trade, industry and energy said on Sunday."We plan to highlight the capability of our firms for major projects with which the Iranian government seeks to rebuild infrastructure, diversify industries and develop energy fields in the post-sanctions era," the ministry said in a statement.Woo will also visit Qatar on August 25, it added.South Korean minister of Land, Infrastructure and Transport Yoo Il-ho is also visiting Iran, as well as Algeria and Malta, from August 21 to 29, the ministry has said.Officials of public and private companies are accompanying the minister to Iran, once the sixth largest market in terms of orders won by South Korean builders before Seoul joined international sanctions on Tehran, the statement added."The delegation will discuss possible deals and continue talks in the second half of this year, as we need to prepare for actual business deals to be made next year," a source at South Korea's energy ministry told Reuters by telephone.OPEC member Iran has the world's largest gas reserves and is fourth on the global list of top oil reserves holders. It outlined plans last month to rebuild key industries and trade relations following the nuclear agreement.