Immoral to say Israel should stay out of Iran accord debate in US, minister says

Steinitz responds to comments US Secretary of State John Kerry made Friday that were interpreted by some as a warning for Israel to temper their criticism of Iran deal. 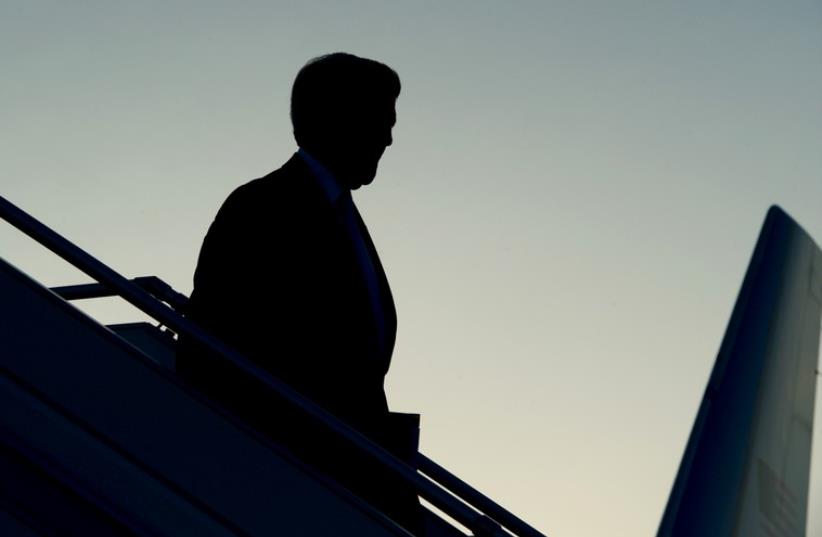 US Secretary of State John Kerry is seen in silhouette as he deplanes against an evening sky after arriving in Geneva, Switzerland, on May 29, 2015
(photo credit: STATE DEPARTMENT PHOTO)
Advertisement
Efforts to muzzle Israeli voices in the US debate over the Iran nuclear accord are unacceptable, illogical and even immoral, National Infrastructure, Energy and Water Minister Yuval Steinitz said on Sunday.Steinitz, a close confidant of Prime Minister Benjamin Netanyahu, responded in an Israel Radio interview to comments US Secretary of State John Kerry made Friday that were interpreted by some as a veiled threat to Israel to tamp down its criticism of the nuclear deal.Kerry, speaking to the Council on Foreign Relations in New York, said that if Congress overturns the accord, “our friends in Israel could actually wind up being more isolated and more blamed, and we would lose Europe and China and Russia with respect to whatever military action we might have to take, because we will have turned our backs on a very legitimate program that allows us to put their [Iran’s] program to the test over these next years.”Steinitz completely rejected warnings that Israel should stay out of the debate.“To demand from a country which Iran threatens publicly to destroy, to wipe it off the map, that it not express its opinion on something so relevant for our national security, future and existence is an illogical and even immoral demand,” Steinitz said.If there is harsh criticism inside the US – among the public, in Congress, in the media and among experts – then it is because the accord is “full of holes,” Steinitz added.“This hint that if the agreement will be rejected by Congress, then Israel will turn into a scapegoat, is unacceptable to us,” he said. “Congress is sovereign to make any decision. If it rejects it, that means there is a big majority among the Republicans and also many Democrats who think the accord is not good and is full of holes, and needs to be rejected.”Hanging the specter of isolation over Israel’s head is not acceptable dialogue between friends, Steinitz said.It is, however, not the first time Kerry has warned Israel of isolation if it does not adopt the policies he says are good for it.In a joint television interview in November 2013 with Israeli and Palestinian television networks, Kerry said, “I believe that if we do not resolve the issues between Palestinians and Israelis, if we do not find a way to find peace, there will be an increasing isolation of Israel, there will be an increasing campaign of the delegitimization of Israel that has been taking place on an international basis.”During that same interview he asked, after saying that chaos may the alternative to getting back to negotiations, “Does Israel want a third intifada?” Two months later, at the Munich Security Conference, he said that the status quo between Israel and the Palestinians cannot be maintained.“It is not sustainable. It is illusionary,” Kerry said. “You see for Israel there is an increasing delegitimization campaign that has been building up. People are very sensitive to it, there is talk of boycott and other kinds of things. Are we all going to be better with all of that?” On Saturday a senior Israeli official responded to Kerry’s statements by saying, “We reject the threats directed at Israel in recent days.”Congress will make its decision “based on American interests, which include consideration of US allies,” and “the regrettable attempt to intimidate Israel will not prevent us from voicing our concerns about this deal, which poses direct threats to Israel’s security,” the official said.