The reproach came just hours after Ayatollah Ali Khamenei, the Supreme Leader of Iran, released a video in which he said it is "not clear" whether the Holocaust was "reality or not." 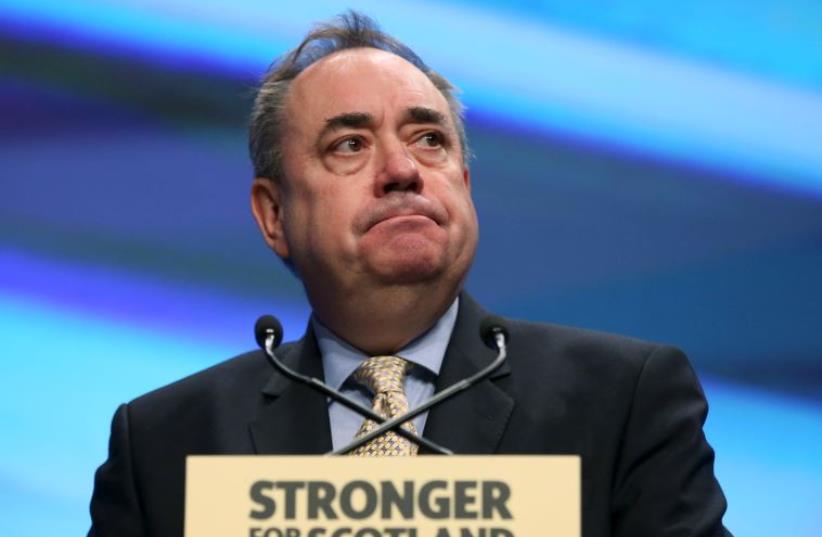 UK rep to the European Council Alex Salmond
(photo credit: REUTERS)
Advertisement
The UK's representative to the European Council this week rebuked the Israeli government for criticizing Iranian President Hassan Rouhani during a Holocaust commemoration event held in Strasbourg, France, British daily The Telegraph reported Thursday. Alex Salmond told members of the Coucil of Europe, a regional intergovernmental organization with 47 member states under its auspices, that it was "inappropriate" for the representative of Israel to criticize the Iranian president during the Holocaust memorial ceremony while Rouhani was in France.Former ambassador to the United states and current MK Michael Oren (Kulanu) was Israel's emissary at the Strasourg meeting held Wednesday. The reproach came just hours after Ayatollah Ali Khamenei, the Supreme Leader of Iran, released a video in which he said it was "not clear whether the core of this matter is a reality or not, even if it is a reality, it is not clear how it happened." The video, promoted on the Ayatollah's website, also featured a banner with the image of Hitler placed directly on its homepage, The Telegraph noted.
Ayatollah Khamenei Holocaust denial video
Salmond additionally said that there was a “time and place for international politics” and Oren should have refrained from criticizing Rouhani “during a solemn commemoration service.”  Asked about the timing of his comments, Salmond reiterated his position, divulging that the majority of attendees agreed that the attack was inappropriate, The Telegraph reported. “No one else is impressed by that sort of behavior," Salmond added. "It was a formal event to commemorate the greatest disaster in European history.”“Someone had to say what a lot of people who attended that service were thinking,” Salmond said.  Shortly before the Strasbourg meeting commenced, Oren openly slammed Rouhani's four-day visit to Italy and France, asking: “How can Europe honour the memory of the Holocaust, and on the exact same day host the leader of the Iranian regime, which denies that the Holocaust actually happened?”