US moves quickly to codify Iran deal at UN 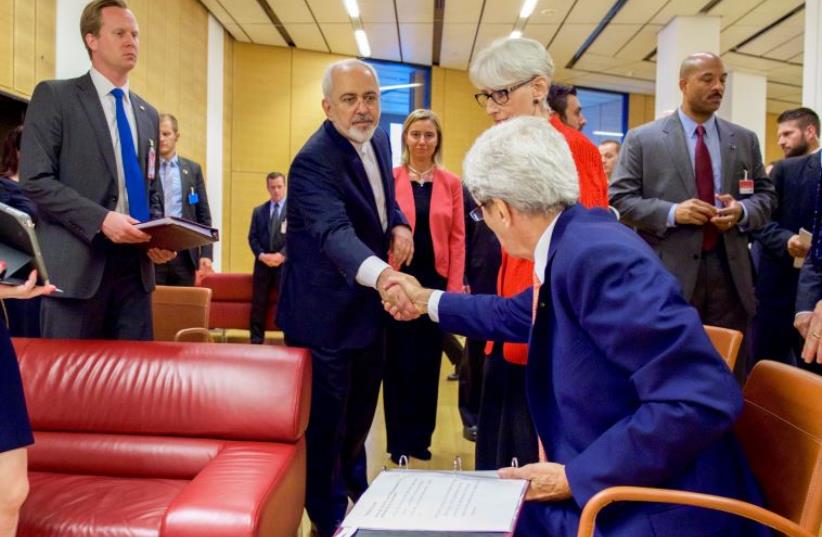 U.S. Secretary of State John Kerry shakes hands with Iranian Foreign Minister Javad Zarif as he prepares to leave the Austria Center in Vienna, Austria, on July 14, 2015, after the European Union, United States, and the rest of its P5+1 partners reached agreement on a plan to prevent Iran from obtai
(photo credit: STATE DEPARTMENT PHOTO)
Advertisement
VILNIUS, Lithuania – The US has circulated a draft resolution in the UN Security Council that , if passed, would endorse the nuclear deal with Iran .The resolution was introduced just a day after the agreement was announced , and just as debate first began on Capitol Hill over Congress’s approval of it .Drafted during the two-year negotiating process, the resolution is sure to pass with the support of permanent members Britain, France, Russia and China, all of whom were at the table negotiating the deal. It reinforces that the UN’s embargoes on conventional arms shipments and ballistic missiles work regarding Iran will expire in five years and eight years, respectively.
Obama remarks on Iran deal
The Joint Comprehensive Plan of Action, announced Tuesday in Vienna, was hailed by that group of world powers as a historic opportunity to prevent Tehran from ever acquiring a nuclear weapon. But regional powers are largely opposed to the deal, and they reinforced that position on Thursday in statements in private and public.“People in my region now are relying on God’s will and consolidating their local capabilities and analysis with everybody else except our oldest and most powerful ally,” Saudi Arabia’s Prince Bandar bin Sultan, a former head of the kingdom’s intelligence services and its veteran ambassador to Washington, said in an op-ed on Thursday.“It will wreak havoc in the Middle East, which is already living in a disastrous environment, whereby Iran is a major player in the destabilization of the region,” Bandar continued.US President Barack Obama rejected the critique that the 159-page deal destabilizes the region further, despite statements to the contrary by some of its oldest regional allies. Israel is largely united against the deal – its government, its opposition and the people at large.His national security adviser, Susan Rice, reinforced that message on Thursday with hints of a new strategy – a potential offer of bolstered defense cooperation with the United States.“When the president hosted the Gulf countries at Camp David in May, we outlined a series of mutual steps that we have agreed to take to bolster their security – security assurances, concrete support to those countries to step up their own capacity to defend themselves, whether directly with conventional military means or through counterterrorism cooperation or countering cyber intrusions,” Rice said. “We have a whole series of stepped-up support that we and our Gulf partners have agreed to provide each other.“And similarly with Israel, Israel is obviously our closest ally and partner in the region,” she continued. “We will also be looking forward, if the Israelis are interested and willing – they haven’t said so yet – to discuss with them how we might further deepen and strengthen our security and intelligence cooperation.”Congress faces a fractious and altogether unique battle ahead, with Republicans unified in opposition to the deal and Democrats facing a stark choice between the preferences of the American-Jewish establishment and their own president.But Iran expressed confidence on Thursday and, despite the battle to come, is still celebrating the agreement.“Next week, the UN Security Council will recognize the enrichment program of a developing country,” Iranian Foreign Minister Javad Zarif said.“We hope that, more or less, within four months measures taken by both sides show results and implementation of the deal begins.”Reuters contributed to this report.