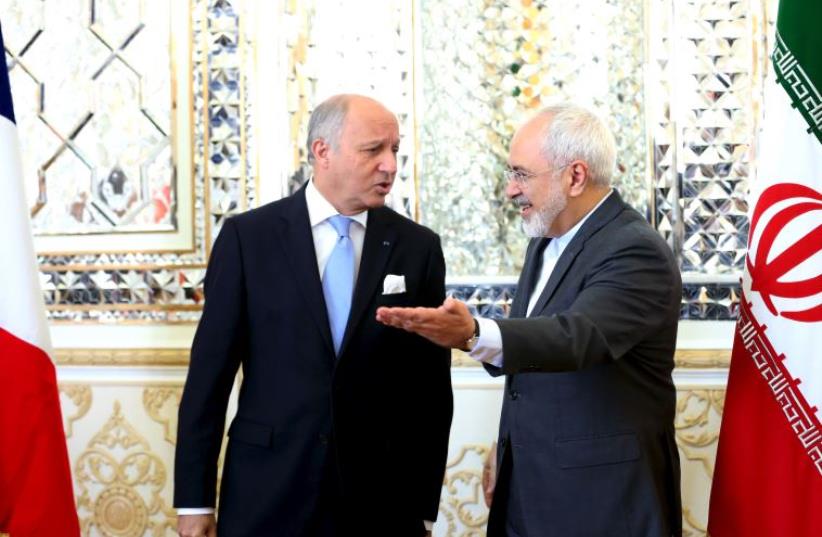 French foreign minister Laurent Fabius (L) and his Iranian counterpart Mohammad Javad Zarif arrive for a meeting in Tehran July 29, 2015
(photo credit: REUTERS)
Advertisement
PARIS - A senior French economic and political delegation heads to Tehran on Sunday to lay the groundwork for the first business contracts between France and Iran since an accord to curb its nuclear program in July.France's main business lobby group, the Medef, is sending a delegation comprising more than 100 firms to Iran, including companies such as oil major Total, planemaker Airbus and car manufacturer Peugeot."We're trying to identify areas where we can move forward, but we're not going to do business at any cost."The delegation includes most of France's CAC 40 companies, but also small and medium enterprises with sectors as wide-ranging as agriculture, finance, luxury goods, pharmaceuticals, construction and transport represented.Heading it up are Agriculture Minister Stephane Le Foll and Trade Minister Matthias Fekl, who will open a new trade office in the Iranian capital on Sept. 22.France took one of the hardest lines of the six powers negotiating the nuclear agreement with Iran.But Foreign Minister Laurent Fabius, who travelled in the summer to Tehran to smooth over ties, has said he does not believe that will hurt its companies once international sanctions against the Islamic Republic are lifted. Iranian President Hassan Rouhani is due to visit Paris in November.Officials say Paris may initially secure deals in areas that were not specifically hit by European Union and U.S. sanctions, most notably in the agriculture and livestock sectors, in which France has relatively little activity in Iran."We're going to work on subjects in particular in agriculture and agribusiness," Le Foll told Reuters."We'll see the potential and the possibilities for trade with Iran and that also means in the agriculture sector, most notably in meat and chicken."One official said the visit could lead to expressions of interest that could become agreements by November, although big contracts were impossible until the lifting of sanctions.Sanctions lifting would begin in the first quarter of 2016 if Iran meets its obligations under the deal, designed to stop it acquiring nuclear weapons.In the aftermath of the nuclear deal, some French executives have said that their firms have fallen behind their main European, American and Asian rivals.French imports from Iran fell to just 62 million euros in 2013 from 1.77 billion in 2011. Exports fell to 494 million euros in 2013 from 1.66 billion in 2011, according to French foreign ministry estimates.French companies were once heavily involved in the Iranian market, but European Union and in particular U.S. sanctions adopted in 2011 scared them away.BNP Paribas was fined almost $9 billion in 2014 for transactions violating US.embargoes. Diplomats and executives say that until there are iron-clad guarantees from the United States that companies will not be penalized should sanctions be re-imposed on Iran, they are likely to remain prudent before committing themselves."The objective is to discover, learn and understand so that afterwards we can put projects together in the short to medium term," French agricultural cooperative Axerea's Secretary General Stephane Michel told Reuters."There are still constraints, especially currency problems. The country is not linked to the global financial system and American sanctions have not been lifted."