"If God wills it, we will shut down [anti-government protesters’] squares of prostitution, humiliation... spies, scandal and abasement; eliminate them and drive them out of Iraq," the official said. 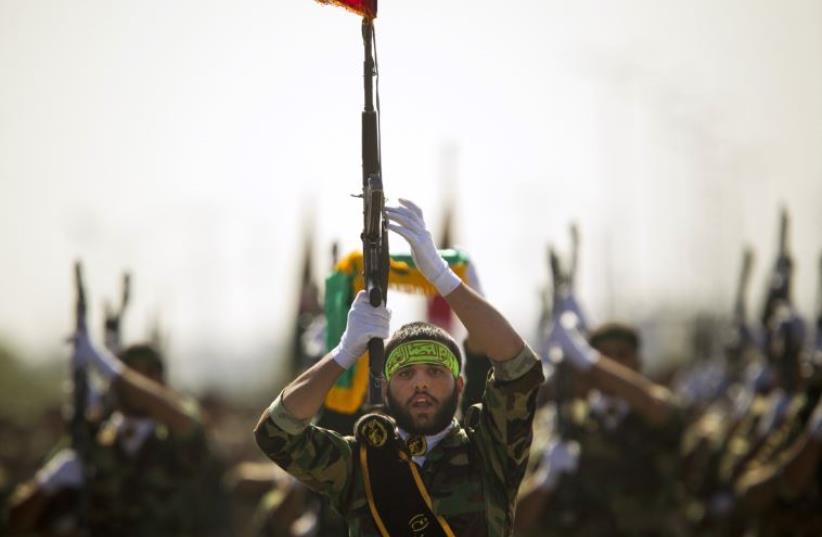 Members of Iran's Basij militia march during a parade to commemorate the anniversary of the Iran-Iraq war in Tehran
(photo credit: REUTERS)
Advertisement
An official for the Iranian-sponsored Popular Mobilization Units declared in a video that Iraq is not a country for homosexuals or collaborators, and that his organization will obliterate government protestors.The Middle East Media Research Institute (MEMRI) posted a video on Thursday that revealed PMU Official Ali Al-Husseini’s anti-gay diatribe. “Iraq is not a country for collaboration, espionage, Joker [gangs], or homosexuals," he said, according to MEMRI's translation. "Every day, I hear you call people filthy. [But] you are the filthy ones! Your families are filthy – filthy; You are the filthy ones! Your families are filthy. You were brought up in filth. "You were brought up in the streets by the Baath [Party], by its female comrades, and by the filthy and accursed pro-Saddam Baathists," Husseini continued. "Inshallah [God willing], when we go to the squares for our million-man demonstration, we will end all this."He continued, saying that, "If God so wills it, we will shut down [the anti-government protesters’] squares of prostitution, humiliation, Joker [gangs], spies, scandal and abasement. Our square is the square of resistance, heroes, mujahideen [jihadists], and rejection of the occupiers. Inshallah, we shall eliminate them and drive them out of Iraq, by the power of God, the Prophet’s family, the mujahideen, and the resistance axis.”MEMRI wrote that the video was uploaded to the Internet on Wednesday ahead of a planned demonstration against the Iraqi government and US forces in Iraq. The demonstration is slated to take place on Friday. LGBT and human rights campaigner Peter Tatchell told The Jerusalem Post: "These are the words of the pro-Iranian enforcer in Iraq. Al-Husseini has been responsible for shooting dead Iraqi civilians who were peacefully protesting against the corruption, poverty and austerity imposed by the Tehran-backed government in Baghdad. "He's using homophobia in a bid to discredit a legitimate popular movement," Tatchell said. "His threat to eliminate anti-government protesters is chilling. It shows that the PMU militias intend to enforce the same tyranny in Iraq as their masters enforce against the people of Iran."In previous demonstrations, Iraqis have called for foreign troops to leave Iraqi soil. Iran’s regime controls the PMU, which has been involved in the violent repression and deaths of Iraqis protesting Tehran’s presence in their country. According to a statement from the United Nations' special envoy to Iraq in December, more than 500 protesters have been killed and 19,000 wounded.In 2006, Iraq’s Shi’ite cleric Grand Ayatollah Ali al-Sistani issued on his website a religious order – fatwa – to kill gays and lesbians. When asked about same-sex relations, Sistani responded “Forbidden,” and “Punished, in fact, killed. The people involved should be killed in the worst, most severe way of killing.”Iran’s regime imposes the death penalty on gays and lesbians. According to a 2008 British WikiLeaks cable, Iran’s judiciary had executed between 4,000-6,000 gays and lesbians.In 2006, Ali Hili, a 33-year-old gay Iraqi exile in London, told Gay City News in New York that “The Badr Corps is committed to the sexual cleansing of Iraq. We believe that the Badr Corps is receiving advice from Iran on how to target gay people,” Hili told the free, weekly newspaper.The paper wrote that: “The well-armed Badr Corps is the military arm of the Iranian-backed Supreme Council of the Islamic Revolution in Iraq (SCIRI).”