Iranian oppositionist provokes regime: 'Would you allow us to protest like in Bahrain?'

Images of Bahraini Shi'ites taking to the streets undisturbed to protest their government's decision that were disseminated on social media networks were received with great wonder in Iran. 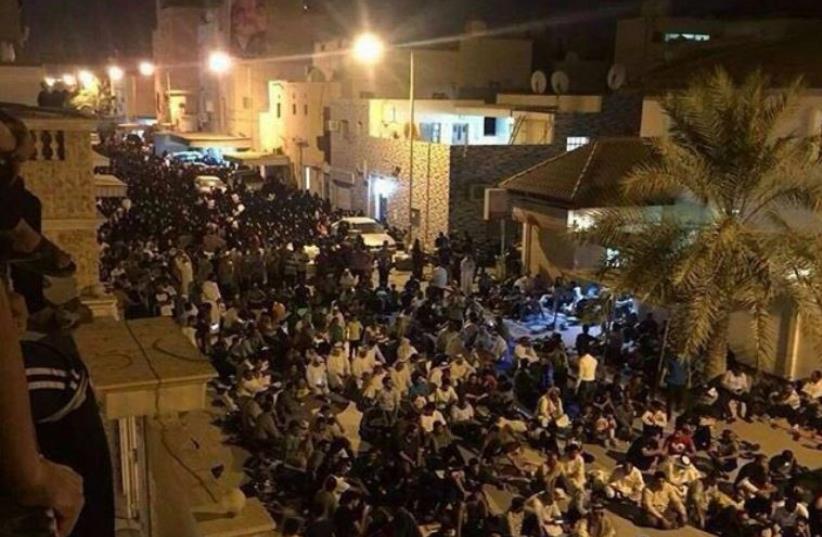 Protesters hold sit-in outside Isa Qassim's house
(photo credit: ARAB SOCIAL MEDIA)
Advertisement
Bahrain's controversial decision to revoke the citizenship of Isa Qassim, a top Shi'ite cleric in the Kingdom, appears to be detrimental not only to the local government, but also to the Iranian regime, the major critic of Bahrain's move.Images of Bahraini Shi'ites taking to the streets undisturbed to protest their government's decision that were disseminated on social media networks were received with great wonder in Iran.Echoing the local criticism over the absence of similar freedom of protest in Iran, Mohammad Nourizad, a prominent Iranian opposition leader, wrote a post on Facebook provoking the commander of the Iranian Revolution Guard's Quds Force, Qassem Suleimani."Mr. Suleimani, these are the supporters of Isa Qassim who gathered outside his house in Bahrain. Can we also gather outside the houses of Mehdi Karoubi and Mir-Hossein Mousavi (two prominent Iranian opposition leaders who contested the presidential elections in 2009)?" Nourizad asked.Nourizad was referring to the 2009 elections due to the mass protests that broke out in the state after it was discovered that they were rigged. The Revolutionary Guard played a major role in suppressing these popular protests by violently killing and injuring dozens of protestors.Watching images from Bahrain, Iranian social media activists said the protest movement in Bahrain shows that Shi'ites in the Kingdom have a great extent of freedom, stating that "had such a gathering taken place in Iran, it would have been dispersed violently by the Revolutionary Guard and security forces."On Monday, Suleimani fiercely criticized Bahrain's decision to strip Isa Qassim of his citizenship, stating that "there is no doubt that the people of Al-Khalifa (Bahrain's Royal Family) know very well that acting against Sheikh Isa Qassim means to cross a red line and ignite a fire in Bahrain and the entire region."