Starting second term, Iranian president Rouhani urges Europe not to side with Trump

Rouhani takes the oath of office before parliament in Tehran in the presence of dignitaries including senior European figures.

By REUTERS
AUGUST 5, 2017 15:40
Iranian President Rouhani takes oath of office before parliament, August 5, 2017. (Reuters)
Advertisement
Iranian President Hassan Rouhani, sworn-in for a further term on Saturday, has accused the United States of trying to undermine Tehran's nuclear deal with world powers, and urged European countries not to side with Washington.Rouhani, who was decisively re-elected in May after promising to open Iran to the world and create more jobs, took the oath of office before parliament in Tehran in the presence of dignitaries including senior European figures."The US's repeated violations of its commitments and the new sanctions it imposed on Iran have left a negative impact on Iran’s public opinion, and can hamper implementation of the nuclear deal," Rouhani was quoted as saying by Tasnim news agency in advance of the ceremony.The deal he championed with the United States and five other major powers in 2015 led to the lifting of most sanctions against Iran in return for curbs on its nuclear program.Rouhani has intensified efforts to protect the deal - the biggest achievement of his first term - against Washington's return to an aggressive Iran policy since US President Donald Trump took office.The US Senate voted in late July to impose new sanctions on Iran, Russia and North Korea. The sanctions target Iran's missiles program, as well as human rights issues.Iran has said the new US sanctions break the terms of the nuclear deal and has vowed a "proportional" reaction.In a meeting with European foreign policy chief Federica Mogherini in Tehran, Rouhani said the presence of senior European dignitaries at his swearing-in ceremony showed that Europe was determined to expand ties with Tehran despite U.S. pressures. 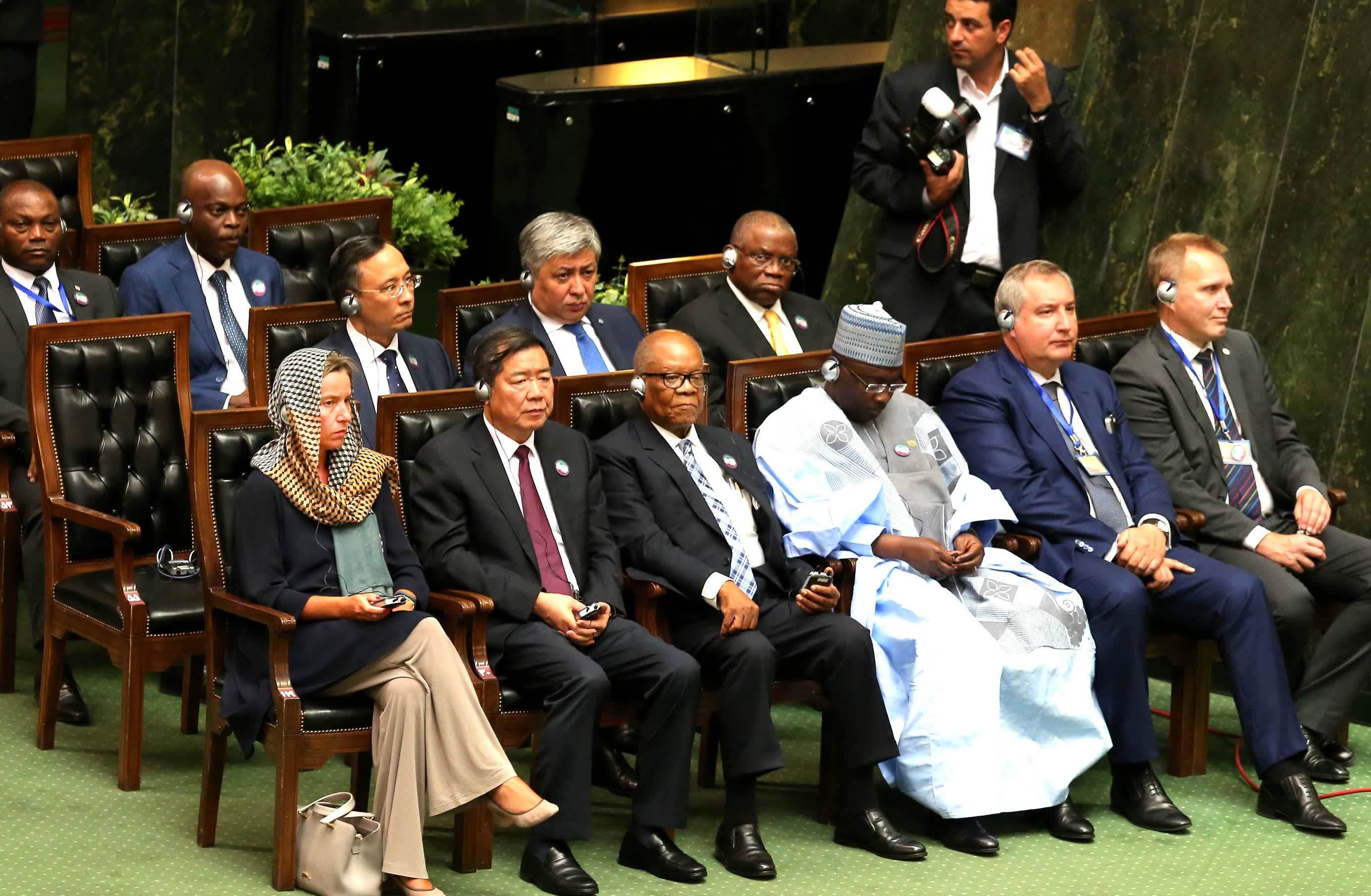 European foreign policy chief Federica Mogherini attends a swearing-in ceremony for Iranian president Hassan Rouhani for a further term, at the parliament in Tehran, Iran, August 5, 2017 (TIMA via Reuters)Tasnim also quoted Iranian Foreign Minister Mohammad Javad Zarif as saying in his meeting with Mogherini: "Mr Trump is trying to destroy the nuclear accord at Iran's expense, and Europe should be conscious of this."Ali Akbar Velayati, a senior adviser to Supreme Leader Ayatollah Ali Khamenei, also asked Europe to "take a more independent policy towards Iran" state media reported.CEREMONYOther top foreign officials present at Rouhani's swearing-in ceremony will include French Foreign Minister Jean-Yves Le Drian, State Secretary at the German Foreign Ministry Michael Roth, and British Minister of State for the Middle East and North Africa Alistair Burt.Security in the capital has been increased to the highest level, the police said, two months after gunmen linked to the Islamic State group attacked the parliament and the mausoleum of the late Ayatollah Ruhollah Khomeini, killing 17 people.Rouhani's deputy said on Wednesday that Rouhani would keep on two important ministers for his second term: Oil Minister Bijan Zanganeh, who is largely credited with closing a deal with the French oil major Total, and Foreign Minister Zarif, Iran's lead negotiator in the nuclear agreement.The powers of the elected president are limited by those of the unelected Supreme Leader who outranks him, but the scale of Rouhani's victory can give the pragmatist president a strong mandate.However, analysts say Rouhani may struggle to make a significant impact given sharpening divisions in the dual clerical-republican power structure in Iran, and Trump's aggressive policy against Tehran.While he spoke much about women's rights during his campaign, Rouhani is not expected to select any women for his cabinet.He also has a debt to pay to reformists who put their weight behind his election campaign.