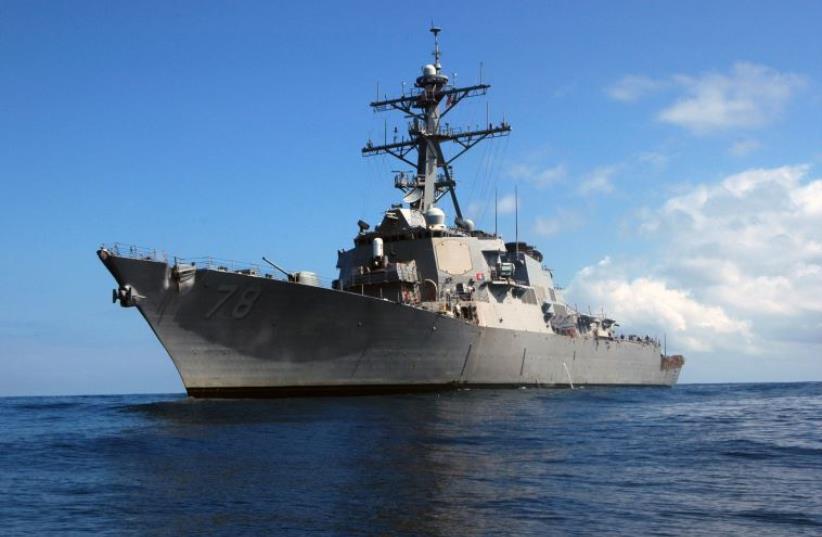 The USS Porter has engaged in combat and support operations with the US Navy, including Operation Iraqi Freedom.
(photo credit: COURTESY US NAVY PHOTO ARCHIVE)
Advertisement
WASHINGTON - Multiple fast-attack vessels from the Iranian Revolutionary Guard Corps came close to a US Navy ship in the Strait of Hormuz on Saturday, forcing it to change direction, a US official told Reuters on Monday.The official, speaking on the condition of anonymity, said the IRGCN boats came within 600 yards of the USNS Invincible, a tracking ship, and stopped. The Invincible was being accompanied by three ships from British Royal Navy and forced the formation to change course.The official said attempts were made to communicate over radio, but there was no response and the interaction was "unsafe and unprofessional." The incident comes just days after Iran successfully completed a series of tests on the advanced Russian-made S-300 missile-defense system, making it fully operational, Iranian state media reported Saturday. Abraham Assael, CEO of the Fisher Institute for Air and Space Strategic Studies in Herzliya and a former brigadier- general, said Israel cannot afford to ignore the S-300.
US calls Iran actions in Gulf "unsafe", "provocative"
“The S-300 advanced missile defense system is a system that wasn’t there before and which is very dangerous,” he told The Jerusalem Post on Sunday.While the S-300 is an older system with radar unable to detect stealth technology such as that possessed by F-35 fighters, “it’s very good against third or fourth generation combat aircraft,” which make up the vast majority of Israel’s air force.The missile-defense system was delivered by Russia last year in a $800 million deal that had been halted in 2010 due to United Nations Security Council sanctions that barred the sales of advanced weapons to Tehran. The restrictions were lifted last year after the Islamic Republic and six world powers signed the nuclear deal in July 2015. In October 2016, Moscow announced it had completed the delivery of the systems to Iran.Israel had long sought to block the sale, as it believes Iran will violate the international accord aimed at preventing it from developing nuclear weapons. Jerusalem is also concerned that the S-300 might hurt Israel’s air superiority in the region.Iran test-fired a new ballistic missile in February, prompting Washington to impose some new sanctions on Tehran.