The Revolutionary Guards, Iran’s most powerful military force which also oversees an economic empire worth billions of dollars. 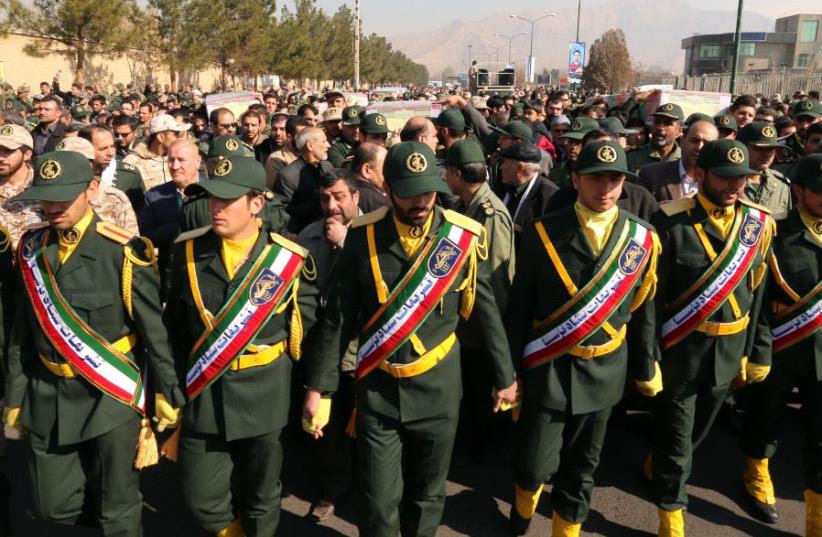 Iranian Revolutionary Guard members in Tehran carry the casket of Iran Revolutionary Guards Brigadier General Mohsen Ghajarian, who was killed in the northern province of Aleppo , Syria
(photo credit: ATTA KENARE / AFP)
Advertisement
A commander in Iran's elite Revolutionary Guards and a lower-ranking Iranian fighter have been killed fighting Islamic State in Syria in recent days, Iranian media reported on Sunday.The Revolutionary Guards, Iran’s most powerful military force which also oversees an economic empire worth billions of dollars, have been fighting in support of Syrian president Bashar al-Assad for several years.An Iranian official told the Tasnim news agency last year that more than 1,000 Iranians have been killed in Syria. Senior members of the Guards have been among those killed.Kheyrollah Samadi, a Guards commander in charge of a unit in Syria, died on Thursday in fighting in the Albu Kamal region, bordering Iraq, according to Fars News.Samadi was killed in clashes with Islamic State, according to the Ghatreh news site. Iranian media have previously reported on fighting in that area between Iran's Shi'ite militia allies and Islamic State.The Syrian army and its allies took complete control over Albu Kamal, Islamic State's last significant town in Syria, a military news service run by Hezbollah said on Sunday.Samadi, who fought in the Iran-Iraq war during the 1980s and had retired from the Iranian military before signing on to go to Syria, was killed by a mortar explosion, Fars News, a news agency, said.Iranian news sites posted pictures on Sunday of Samadi with Qassem Soleimani, head of the Guards branch responsible for operations outside Iran.The lower-ranking Iranian fighter, Mehdi Movahednia, was killed on Saturday in clashes with Islamic State in the town of Mayadin in eastern Syria, Fars News reported.The Revolutionary Guards initially kept quiet about their role in the Syria conflict. But in recent years, as casualties have mounted, they have been more outspoken about their engagement, framing it as an existential struggle against the Sunni Muslim fighters of Islamic State who see Shi‘ites, the majority of Iran’s population, as apostates.On web sites linked to the Guards, members of the organization killed in Syria and Iraq are praised as protectors of Shi‘ite holy sites and labeled “defenders of the shrine”.US President Donald Trump last month gave the US Treasury Department authority to impose economic sanctions on members of the Iranian Revolutionary Guard in response to what Washington calls its efforts to destabilize and undermine its opponents in the Middle East.