Crowds of mostly young Iranians attended the march near the ancient city of Pasargadae in central province of Fars on Friday. 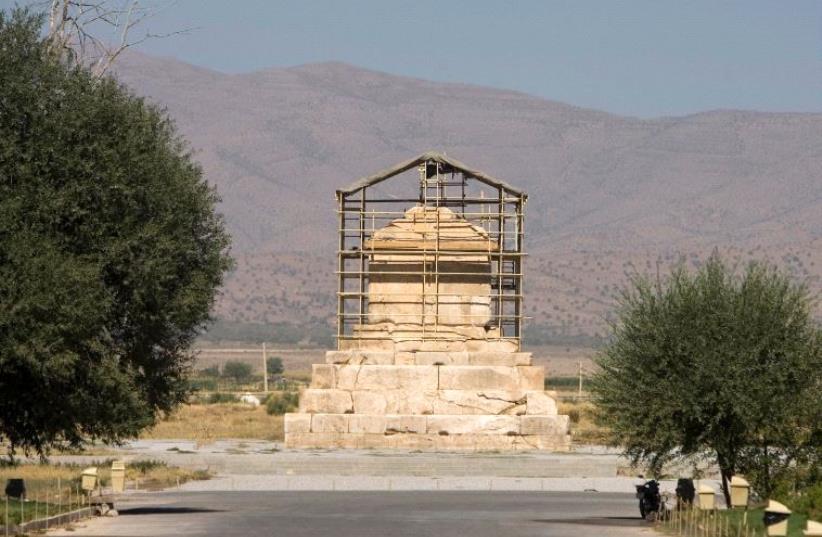 The tomb of Cyrus the Great, a revered King of the Persian Empire, is seen at Pasargadae outside Shiraz, south of Tehran, September 24, 2007
(photo credit: REUTERS)
Advertisement
Iran's Islamic Republic has arrested the organizers of a march last week near the tomb of the ancient Persian king Cyrus the Great that attracted thousands of people celebrating the country's pre-Islamic glory.Crowds of mostly young Iranians attended the march near the ancient city of Pasargadae in central province of Fars on Friday to celebrate the day unofficially marked in the Iranian calendar as Cyrus Day.Videos released on social media show them chanting "Iran is our country, Cyrus is our father." Reuters could not independently verify the videos' authenticity."The main leaders and organizers of this gathering who chanted unconventional slogans against the (Islamic Republic's) values have been arrested," said prosecutor Ali Salehi in the provincial capital Shiraz on Monday, according to Fars news agency.A senior Shi'ite cleric, Ayatollah Nouri Hamedani, denounced the gathering and its participants on Sunday."These people are against the Revolution. I wonder how they can gather around Cyrus's tomb and chant the same slogans (about Cyrus) that we chant about our supreme leader," Fars quoted him as saying. Supreme Leader Ayatollah Ali Khamenei has both the highest religious and political power in Iran.A judiciary official said on Monday that the organizers of the event had been under surveillance by the intelligence and security forces for a long time and will face prosecution. There was no indication how many organizers had been arrested.Following the march, there were heated debates on social media and harsh reactions from supporters of Tehran's Islamic government because of some slogans against Arabs and in support of former leader Mohammad Reza Shah shouted by a few marchers.Clerics in Iran frown upon nationalist movements based on the pre-Islamic glory, especially because the former Shah, who ruled until the 1979 Islamic Revolution, linked his reign to Cyrus the Great, the founder of the ancient Persian Empire, and celebrated 2,500 years of continuous monarchy.Iran's theocratic government is more inclined to celebrate events linked to Shi'ite history and mainly promotes the Islamic heritage of the country. Islam arrived in Iran 651 when invading Arab armies toppled the mostly Zoroastrian Sassanid Empire.