Iranians fear attacks and economic isolation as Trump gets tough

Some scared Iranians are even preparing escape plans, just as they did in the eight-year war with Iraq when Saddam Hussein's jets pounded Iranian towns and cities. 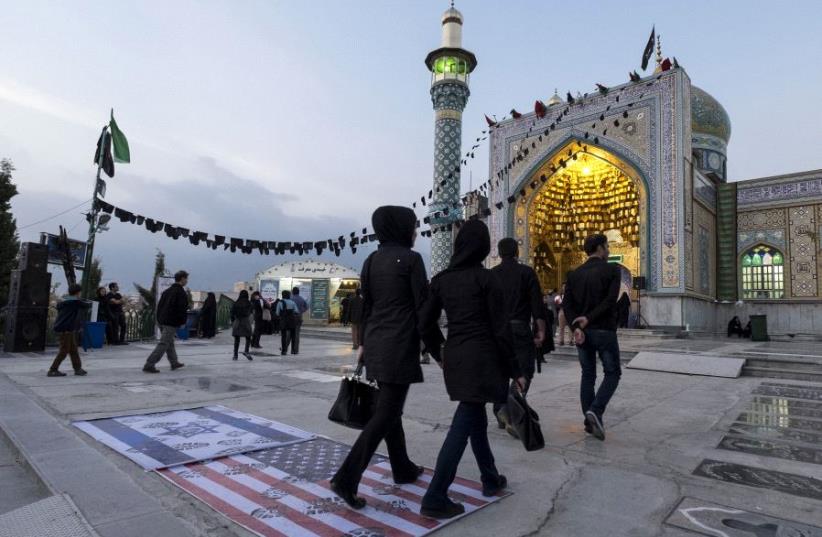 People step on a US flag and an Israeli flag at a shrine on Ashura in the north of Tehran October 24, 2015.
(photo credit: REUTERS)
Advertisement
Many Iranians who dreamt of quiet, comfortable lives after a nuclear deal with world powers in 2015 are starting to worry for the first time in decades they might be bombed in their own homes.Since taking office last month, US President Donald Trump has pledged to get tough with Iran, warning the Islamic Republic after its ballistic missile test on Sunday that it was playing with fire and all US options were on the table. Analysts say those options could range from diplomacy to military action and some scared Iranians are even preparing escape plans, just as they did in the eight-year war with Iraq when Saddam Hussein's jets pounded Iranian towns and cities."I told my children to have their passports ready ... if attacked by Israel or America we can flee to Turkey by car because airports will be closed," said Ghorbanali Azhari, 65, a retired teacher in the Western city of Kermanshah.
Trump puts Iran on notice over ballistic missile test
"We have had enough. An eight-year war, economic hardship, sanctions... I cannot let my grandchildren live in fear. There will be bloodshed," Azhari said.Trump plans to impose sanctions on several Iranian entities following its missile test, while crafting a broader strategy to counter what he sees as Iran's destabilizing behavior, people familiar with the matter said on Thursday.Iran's most powerful authority, Supreme Leader Ayatollah Ali Khamenei, has continued to denounce the United States, suggesting the antagonism between the two countries since the 1979 revolution will not abate because of the nuclear deal."I thought Iran's political and economic isolation was over... but now I am deeply concerned about a military strike," said private bank employee Homayoun Barkhordar."I do not want war with any country. I love my country. We just want to live in peace," said the 38-year-old father of two.FEAR AND LOYALTYWhile experts say both sides would take care to avoid armed confrontation in the oil-rich Gulf, U. threats of reprisals for the missile test, coupled with Iran's defiant reaction, could ratchet up tensions dangerously."I am thinking of moving to a small town," said Ali Gharveh in the central city of Isfahan, which was bombed by Iraq during the 1980-88 war. "Life is cheaper and is safer than big cities that might be the main targets if America wants to attack Iran."The United States and Iran have been at loggerheads since the revolution that toppled the US-backed Shah and Washington cut diplomatic ties when students stormed the US embassy soon after and took 52 Americans hostage for 444 days.The United States and its regional allies accuse Iran of trying to tighten its grip on Arab states, from Iraq to Lebanon, to Syria to Yemen, and Trump has accused former US President Barack Obama of being too kind to Tehran.Days after coming to power, Trump barred residents from seven mainly Muslim countries, including Iran, from traveling to the United States for 90 days. Officials in Iran said Tehran would limit issuing visas to Americans in response."I always wanted my two children to study in America. But the new government is just spreading hatred towards Iranians," said Firuzeh Hengam, a computer engineer in the central city of Kashan. "They say no options are off the table. It means attacking Iran is among their options."But while many Iranians worry about an escalation with the United States, just as they worry about economic hardship at home, they are also loyal and defiant."Iran is my home no matter who the rulers are. Look at Syrians who left their country because of the war. They are being humiliated ... I do not want to be like them," said hairdresser Samira Azamzadeh, 47, in the northern city of Rasht."I don't have money to go abroad. I am a single mother of two teenage girls."ECONOMIC HARDSHIPIran's economy has been hit hard by the double hammer blows of years of sanctions over its nuclear program and the plunge in oil prices since the middle of 2014.Iranians had pinned their hopes on economic progress following the nuclear deal, but a year after sanctions were lifted the economy is only recovering slowly and deals with Western investors are few and far between.They now worry that US aggression and the curbs on travel will make wary Western investors even less likely to return to do business with Tehran."The economic situation will even get worse because of the America's tough language. It will scare away foreign investors," said Omid Sadrzadeh, a factory owner in Karaj near the capital Tehran.One former senior Iranian official also said Trump's approach was playing into the hands of powerful hardliners such as Iran's elite Revolutionary Guards Corps (IRGC).The IRGC controls the country's missile program and its deputy said on Thursday it had many underground missile facilities hidden in the mountains."Iran's hardliners want a war. It will strengthen their position in the establishment. They want Iran to be isolated," said the official, who asked not to be named."They will do whatever they can to deepen tension between Iran and America, from launching missiles to giving fiery speeches."Analysts say Tehran could retaliate against any military strike with hit-and-run attacks in the Gulf and by closing the Strait of Hormuz, the strategic waterway through which some 40 percent of Gulf oil exports pass.Iranian authorities have warned arch-enemy Israel and the United States in the past that Tehran's response to a military strike would be tough, and some of Iran's guided missiles have the range to strike Israel.Arash Kiai, a teenager in the central city of Yazd is scared, and angry, both with Trump and Iranian officials. But he will fall in line behind them if it comes to war."Whatever happens in the world they blame Iran. But why? We are peaceful people," he said. "I am not an Iran regime supporter but Trump has no right to humiliate Iranians. If attacked, I will fight for Iran."