Senior defense expert Tal Inbar: This is a boost to Iranian confidence; Iran could try to mobilize additional batteries in Syria or Lebanon. 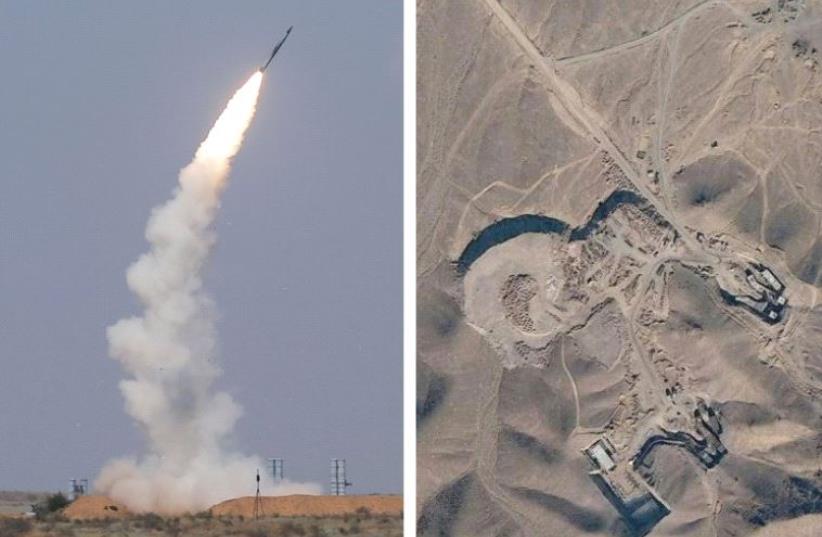 S-300 air defense system (L) and Iran's Fordow nuclear plant
(photo credit: GOOGLE/REUTERS)
Advertisement
Iran’s decision to quickly set up its recently received, Russian-made, S-300 advanced air defense system at the Fordow underground uranium enrichment facility is an indication of how important the site is to the Islamic Republic, and could have regional consequences, a senior security expert told The Jerusalem Post on Tuesday.Tal Inbar, head of the Space and UAV Research Center at the Fisher Institute for Air and Space Strategic Studies in Herzliya, described the Iranian action as “poking a finger in the eyes of the West,” and a provocative move that signals high Iranian confidence.“They could have put it at the Bushehr nuclear power plant, which produces electricity, and is civilian – Bushehr could not produce nuclear bombs,” Inbar said. “They could have placed it symbolically at a military base in Tehran, for example,” Inbar said.The speed at which the system was deployed is also telling, Inbar said. Russia sent Iran the S-300 surface-to-air missile system in stages, and the Iranians proceeded to parade its components, such as radars, and control cabins, in military ceremonies in Tehran.Once they received the full system, however, they immediately discontinued such displays, wasting no time in setting it up near the Fordow uranium site.“That broadcasts a message that this site is very important for the Iranians,” Inbar said. “Fordow is not just another site. It is where the Iranians developed mechanisms for nuclear detonation, where the nuclear ‘physics package’ was developed.”For many years, Iran destroyed structures, paved roads, poured huge quantities of water over hundreds of tons of soil, and layered the area with asphalt “for no functional reason,” Inbar said. These actions, suggestive of largescale cover-up operations, were photographed by satellites over the years prior to the 2015 nuclear deal with the West.“All agreements with Iran are based on what the West knows [about its nuclear program]...but there was never a full Iranian disclosure,” Inbar added. “Iran’s ability to conceal information continues to exist.”Earlier this week, Iranian Brigadier General Farzad Esmaili, commander of the Islamic Revolutionary Guards Corps’ air defense force, spoke to state TV about the S-300 deployment.“Our main priority is to protect Iran’s nuclear facilities under any circumstances,” he said.Esmaili did not say whether the system was operational, but added, “Today, Iran’s sky is one of the most secure in the Middle East.”Inbar said it was clear the system is now operational: “As soon as you put it on the ground, once the trucks are parked and linked up to electricity, it is operational. It has a radar that can detect and monitor many targets.”Iranian Supreme Leader Ayatollah Ali Khamenei said on Sunday in a televised speech, “The S-300 system is a defense system not an assault one, but the Americans did their utmost to prevent Iran from getting it.”Inbar argues that should Iran decide one day to deploy the S-300 to Syria or Lebanon, it could become an offensive weapon that could be used to try to limit air activities in the region, including in Israeli skies.“As far as the Iranians are concerned, this is a boost to their self-confidence,” he said. “They are confident in their ability to defend an important site. That confidence could radiate on to other, regional arenas.”Iran might also be sending a domestic signal, showing that it is prepared for the scenario of the West not holding up the agreement, Inbar added.Nevertheless, the S-300 did not represent an impenetrable wall for any potential future attack, he added.“There is no system that can’t be cracked,” Inbar said. “The question is: what is the price, the risk, and the time needed to do so.” He added that the S-300 is not a wondrous all-capable system, though it is highly advanced, and can deal with jets and drones.“It can certainly limit the operational ability of other states,” said Inbar. “What would prevent Iran, when they receive a few more [batteries], from flying them to Syria or Lebanon?” Reuters contributed to this report.