The success of the Falluja operation launched on May 23 gives fresh momentum to Iraqi forces in the campaign to retake Mosul. 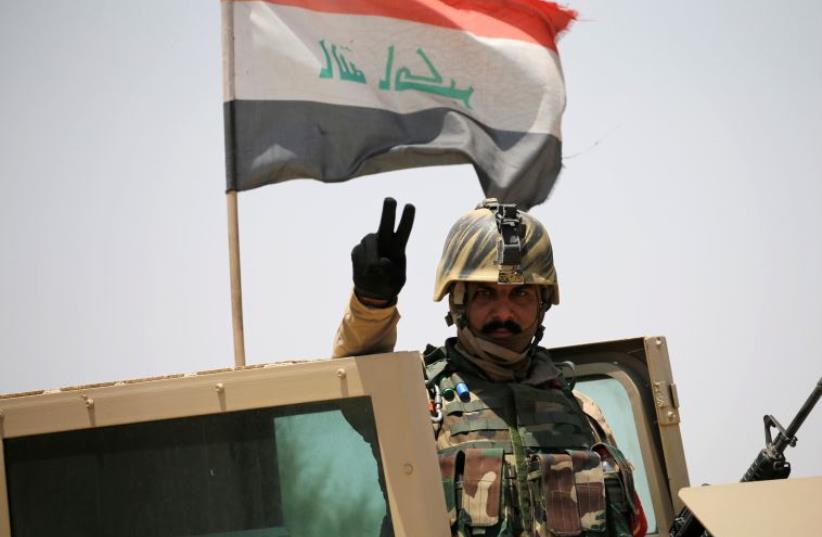 An Iraq soldier gestures near Falluja, Iraq
(photo credit: REUTERS)
Advertisement
Iraqi forces recaptured the last district held by Islamic State militants in the city of Falluja on Sunday and the general commanding the operation declared the battle over after nearly five weeks of fighting.Iraqi forces reached the center of Falluja last week but militants remained holed up in some parts of the city west of Baghdad, including in its Golan district, which Iraqi forces retook on Sunday.The assault is part of a wider offensive by Iraqi forces against Islamic State militants who seized swathes of territory in 2014 but are now being driven back by an array of forces backed by a US-led coalition.The success of the Falluja operation launched on May 23 gives fresh momentum to Iraqi forces in the campaign to retake Mosul, the largest city anywhere in the militants' self-proclaimed caliphate spanning Iraq and Syria."Today was the last battle in Falluja, specifically in the Golan area. We, the CTS, liberated it completely. We are standing now under the bridge where they executed the martyr Mustafa al-Athari. Golan was easy, there are ambushes here and there but we control all of the area now," Captain Ahmed Ali from the Iraqi Counter Terrorism Service (CTS) said.Iraqi soldier Athari was killed by Islamic State after a clash in the al-Hayakil area of Falluja last year and hanged from the bridge.Fighting to recapture the Iraqi city has forced more than 85,000 residents to flee to overwhelmed government-run camps. The United Nations says it has received allegations of abuse of civilians fleeing the city, including by members of Shi'ite armed groups supporting the offensive.The militants seized Falluja in January 2014, six months before they declared a "caliphate" over parts of Syria and Iraq."We suffered a lot, we were displaced from place to place. All we see is shooting and guns, we escaped without even shoes, walking from street to street," displaced woman Um Omar said.Iraqi forces are now dismantling bombs and booby-trapped houses, whilst pursuing militants who slipped out of the city from the northwest, Sabah al-Numani, a spokesman for the counter-terrorism forces that spearheaded the offensive, told Reuters.