Is Iraq’s Nineveh boiling over? 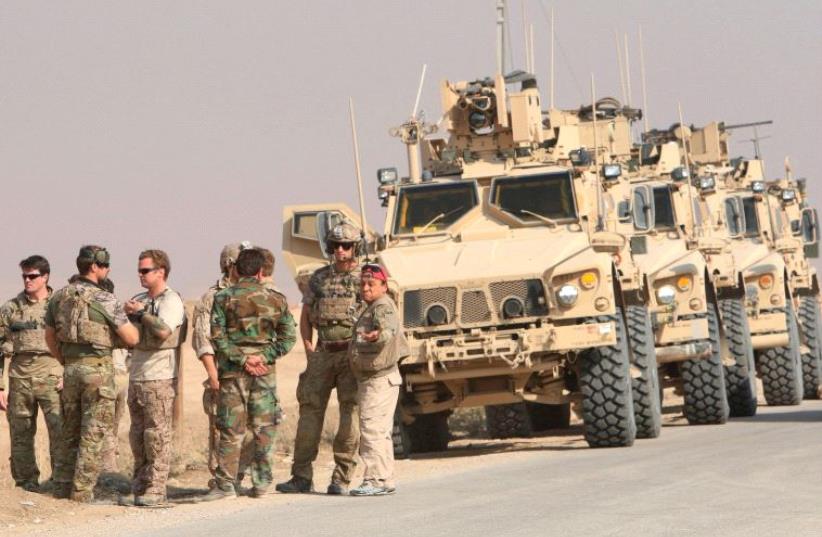 US military vehicles are seen north of Mosul during an operation against Islamic State in late October
(photo credit: REUTERS)
Advertisement
A US service member was killed during a mission with Iraqi Security Forces in Nineveh province in Iraq, reports indicated over the weekend.  However, US authorities say they cannot confirm details of the incident, pending an investigation, and that the name of the service member has been withheld until next of kin can be notified.This is a rare casualty for US operations in Iraq, where ISIS was largely defeated in large scale battles in 2017. However over the last year and a half ISIS has attempted to establish a new foothold and a recent US report said that it is trying to build up its command and control networks. It exploits areas where there is either weak government control, such as the desert border with Syria, or where there are divisions between local authorities. One of these areas is Nineveh province.Nineveh is a huge area, roughly 37,000 square kilometers and had a population of several million prior to the ISIS war. Its main city is Mosul, and it includes a diverse landscape of minorities such as Kurds, Turkmen, Yazidis, Christians and Shi’ite Shebeks. It used to be a hallmark of the diversity of Iraq. This is where the hammer of ISIS fell the worst in 2014. ISIS forced Shi’ites and Christians to flee in June 2014 and then carried out a genocide against Yazidis in August of 2014, five years ago. It murdered men and kidnapped and raped women, committing the most vile and horrific crimes. It left behind destruction and some 200 mass graves across Iraq, many in Nineveh.While ISIS ravaged the province, the liberation of areas from ISIS control led to tensions between the Shi’ite paramilitaries, called Hashd al-Sha’abi, local Sunni Arabs and also Kurdish Peshmerga forces. After the Kurds were forced to leave Sinjar in 2017, the paramilitaries, now with official government salaries and ranks, set up a web of checkpoints. These groups fall under what is called the Popular Mobilization Forces. The forces include a plethora of different militias that are linked to political parties. Since early 2018 they were supposed to become more systematically incorporated into the Iraqi Security Forces. In short, they were supposed to reduce their links to sectarian political parties and become a proper military force. But old habits die hard.Recently in Nineveh, east of Mosul, the 30th Brigade of the PMU and the 50th Brigade have had tensions. And both have had tensions not only with eachother but also with the central government and with local people. The 50th is run by a Chaldean Christian and is supposed to police and secure Christian areas such as Qaraqosh (Bakhdida), Bartella, Tel Keppe and other towns and villages in Nineveh. But the Kata’ib Babiliyun, 50th Brigade’s name, has other troubles with the minority Shi’ite Shebak (Shabak) population. This minority group suffered under ISIS and now it too has a unit called the 30th Brigade or Liwa Al-Shabak. It recruited local minorities and is linked to the Badr Organization, which itself is linked to the Badr units in the PMU, some of the largest formations. There are other PMU units in this area linked to Sunni groups, including 90-92nd Brigades, and the 201st. This creates a patchwork of authorities and a lot of men with guns to man checkpoints. And that’s only one layer of a multi-layered security cake in Nineveh that includes the Iraqi army and its units, the Federal police, and other interior ministry forces, and the US-led coalition who have a base near the hotel district and university of Mosul.ISIS is active in some areas, particularly using Sunni villages along the river and into the mountains and deserts as way points to travel at night. East of Nineveh province are the areas of the Kurdistan Regional Government and its Peshmerga units. ISIS seeks to find areas between the Iraqi security forces checkpoints and the Kurds and insert itself into ravines, caves and rural areas. Then it carries out attacks when it senses opportunities.The government has sought to remove the 30th Brigade from some of its duties around the village of Bazwaya (Bazwiyah) in the eastern suburbs of Mosul. But the local Shebek protested earlier this month, demanding their soldiers stay. So Baghdad sent its own security forces from the army and other units to calm the situation.It is not clear under what context the US serviceman was killed recently. But an uptick in tensions and violence is clearly taking place in northern Iraq. These tensions are multi-layered because they involve not only ISIS seeking to attack Iraqi forces and locals, but also tensions between Iraqi forces. Yazidis also want to return to Sinjar but say that insecurity prevents them. In addition locals want an end to corruption and numerous checkpoints. Christians say their lands have been confiscated. And Iranian-backed militias have threatened the US. All of this makes for a combustible mix in northern Iraq’s key province.