Is a ‘Moroccan spring’ coming?

The recent protests in Morocco began with a shocking incident that appeared to pit authorities against a poor citizen just trying to make a living. 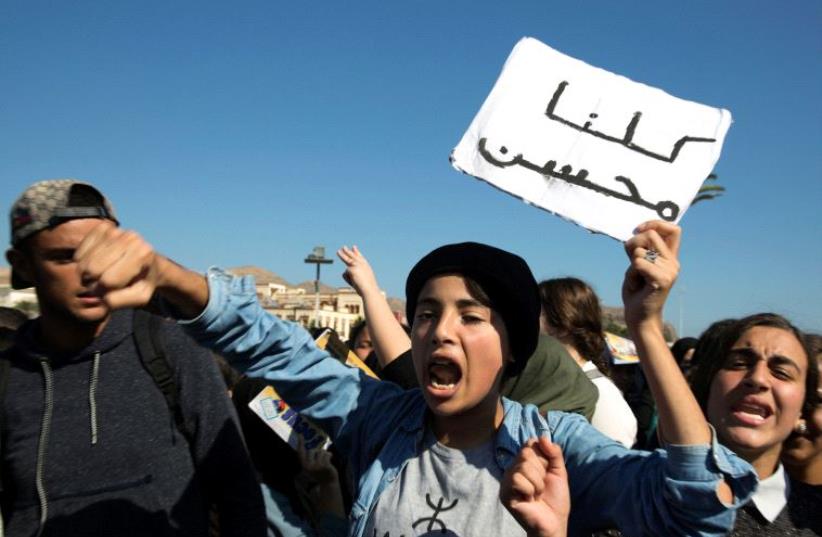 Protesters take part in a rally after the death of Mouhcine Fikri, a fishmonger who was crushed to death inside a rubbish truck as he tried to retrieve fish confiscated by police, in the northern city of Al Hoceima, October 31, 2016.
(photo credit: REUTERS)
Advertisement
Angry demonstrations in Morocco have raised the question of how stable the kingdom, which survived the Arab spring intact, actually is today.The trigger for the protests, which have been peaceful thus far, bears similarities to that which set off unrest in Tunisia nearly six years ago and spread into the convulsions that swept up Egypt, Libya and Syria.The Tunisian uprising began in December 2010, when a young man set himself on fire after police confiscated fruits and vegetables he was selling. Likewise, the recent protests in Morocco began with a shocking incident that appeared to pit authorities against a poor citizen just trying to make a living.Mouhcine Fikri, a fish seller in the northern town of Al-Hoceima, was crushed to death inside a garbage truck Friday night, after he entered the back of the truck in an effort to reclaim fish that the police had confiscated from him in punishment for breaking a ban on swordfish sales.Word spread throughout Morocco that police had ordered the garbage men to “grind” Fikri, something the police denied.But the grinding allegation has remained, amid a widespread perception that the entire Moroccan system grinds down those who are not well off.“Welcome to COP 22, we grind people here,” read one protester’s sign at a demonstration in Rabat, referring to the upcoming UN global summit on climate change in Marrakech, which the regime hopes will boost its image abroad. Another sign at the same protest showed a blender filled with blood.Despite the intensity of the anger, Bruce Maddy-Weitzman, a Tel Aviv University scholar of Arab politics, says there is reason to believe the current Moroccan protests will not escalate into the kind of sustained unrest that would threaten the monarchy.Among the factors pointing against that eventuality is the fact that the main Moroccan Islamist group, the Justice and Development Party, which leads the government and scored well in recent elections, has urged its supporters not to join the protests.“If the Islamists aren’t there, the chances of sustained protests are less,” Maddy-Weitzman said.“It’s hard to see a united opposition crystallizing like we had in Tunisia.”King Mohammed was able to contain Arab spring protests in 2011, in part by launching a reform process in which he appeared to devolve some power to elected representatives, albeit with the palace remaining as final arbiter. “Since 2011, there have been two rounds of parliamentary elections, enabling authorities to say, ‘we have a legitimate government and this is the best way to go.’” Maddy-Weitzman says. “The reforms were cosmetic, but they bought time.”The swift response of the government in arresting 11 people yesterday over Fikri’s death may also help the government ride out public anger. The palace has been doing its utmost to show it sympathizes with public opinion.Immediately after Fikri’s death, the king, who was abroad, ordered the interior minister to visit his family and convey his condolences. Government leaders vowed a rigorous investigation to get to the bottom of the incident.Another factor that could contain the unrest is that the protests, thus far, have not led to clashes with the security forces.Until now, both sides seem to be exercising restraint, and the government has let the demonstrations proceed.“A lot of young people are alienated and angry and are ready to express that anger when there’s a trigger, but that doesn’t indicate a massive snowball effect that would challenge the regime,” Maddy-Weitzman says.Still, another incident or a mistake by either side could stoke passions further, as grievances run deep. Morocco is “still in need of a renewed social contract.The problems are still there – large scale unemployment, alienation and economic growth that is not at a rate that can dent unemployment,” Maddy-Weitzman says.The economic woes mean there is scant chance for young people to advance, which naturally breeds resentment against the system. In this case, there is also resentment over long-standing marginalization of Moroccan Berbers. Fikri hailed from the northern Rif region of Morocco, a Berber area with a history of tense relations with the central authorities in Rabat. Some protesters have carried Berber flags during the demonstrations.Berber grievances include that the state does not accord the Berber language an equal status to Arabic, despite making it an official language in 2011, and that the state, in the past, has not invested in Berber areas.The demonstrators are young.On Monday, students in Al-Hoceima boycotted their schools and took to the streets. Some carried signs that read, “we are all Mouhcine,” The Moroccan Times reported. Protesters shouted, “criminals, criminals, murderers and terrorists.”It should be of concern to the king that some demonstrators railed against the makhzen, a word that connotes the elite establishment connected to the palace. This reflects a wide perception among citizens that the system is rigged against them.“The makhzen humiliates people, life and human rights,” the Moroccan Times quoted Maati Monjib, a professor of political history at the University of Rabat, as saying.Nadir Bouhmouch, a Moroccan activist and filmmaker, suggested that grievances against the regime run very deep, in an interview published on the Democracy Now website. “This is a much bigger issue than just the death of Mouhcine Fikri,” he said. “I mean, Mouhcine died with an empty stomach, according to the medical examination.This is about a people that is hungry, that is being what we call hogra. The protests are about hogra, which is a sort of trailing oppression, an oppression that comes from the top and goes all the way down to the roots of the regime, which are the daily officers, the bureaucracy, everything that is lined up against the people who are seeing an increasing concentration of wealth in the hands of the rich and of austerity and privatization, the neoliberal pull that’s destroyed the needs of the people.”