Such incidents at sea are rare, though Egypt is battling an Islamist insurgency in the region. 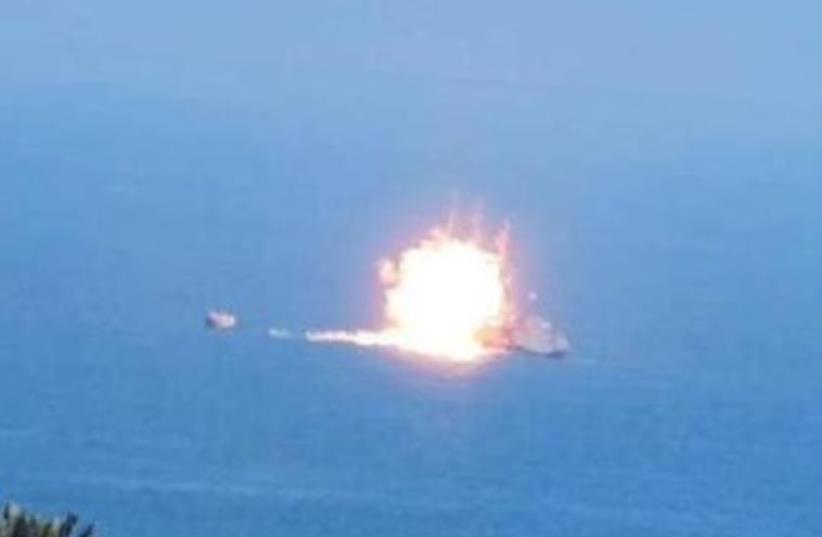 ISIS attacks Egyptian naval vessel off of Mediterranean
(photo credit: EGYPTIAN SOCIAL MEDIA)
Advertisement
Egypt's Islamic State affiliate said on Thursday it fired a rocket at an Egyptian naval vessel in the Mediterranean Sea near the coast of Israel and the Gaza Strip.The militant group Sinai Province has focused mainly on attacking Egyptian soldiers and police in the Sinai peninsula, killing hundreds since the army toppled Islamist President Mohamed Mursi in 2013 after mass protests against his rule.
ISIS attacks Egyptian naval vessel off of Mediterranean
Photographs distributed online by the group appeared to show a rocket heading towards a ship and setting it ablaze on impact. Reuters could not verify the militants' version of events.The Egyptian military said in a statement that a coastguard launch had exchanged shots with "terrorist elements," causing the vessel to catch fire. It said there was no loss of life.Such incidents at sea are rare, though Egypt is battling an increasingly brazen Islamist insurgency in the peninsula that lies between Israel, the Gaza Strip and the Suez Canal.Sinai Province, the most lethal militant group in Egypt, last year pledged loyalty to Islamic State, which controls large tracts of territory in Syria and Iraq and has a presence in Egypt's neighbor Libya.It has recently carried out high profile attacks which prompted the drafting of a sweeping counter-terrorism law.On July 1, 100 militants and at least 17 members of the security forces were killed in a single day of clashes and attacks claimed by Sinai Province, authorities said.A Reuters witness in Gaza saw a plume of dark grey smoke rising from a boat off the coast. Other witnesses in the Palestinian enclave said they heard explosions and gunfire.An Israeli military spokeswoman said Israel was not involved in the incident and had not been asked to assist.Military sources said the suspected militants had fled after firing on the vessel.